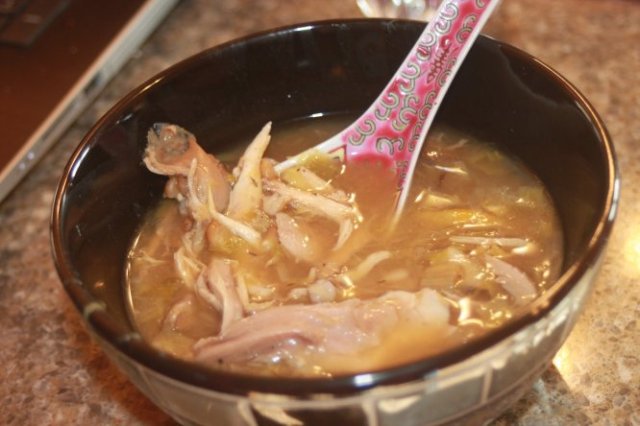 
.:My recipe is an amalgamate of the following ideas:.​

I’m figuring the original soup was based on cocks/cockerels like this one (from the name of the soup if nothing else), so he became a good surrogate for the soup. If you don’t have a cockerel or rooster that HAS to go, try to find a free-ranged chicken somewhere – use either the whole bird or the thighs/legs. Cooking will take less time than needed for a true cock of the age this one is. (A full-fledged rooster is sometimes defined as a male chicken that is over a year in age – but I think the distinctions can be hazy. No, he did not have fully-developed spurs yet – simply nubs, or a vocal crow… – which may also be a consideration in definitions.) 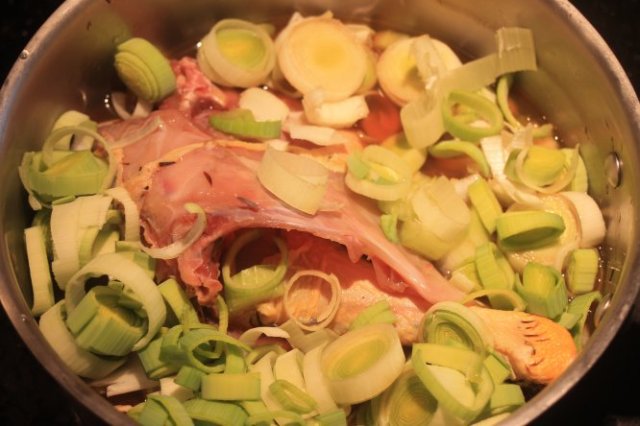 Celery and leeks added to the pot. 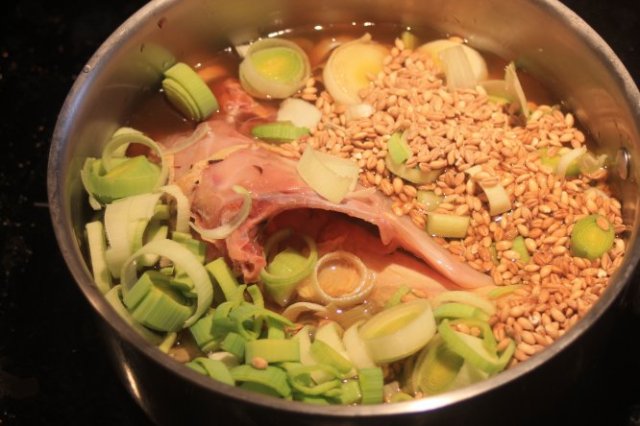 Barley is added. A small amount of salt and pepper may be added now, but reserve most of each for when the soup or stew is ready.. We are now Ready to Cook!
.

The dish has finished simmering, it is now up to me to remove the meat from the bones, return the meat to the pot long enough to make sure everything is hot, and taste for salt and pepper.

Put all of the above into a good cooking pot, bring to a boil, then reduce to a simmer and cover. Simmer for two hours (checking liquid).

When cooked, you can cut the meat off the bones, returning the meat to the broth and serve as a true soup, or you can serve this as-is, depending on your whims. I decided for the sake of this meal, to debone and return this.

Add pepper and salt, to taste, preferably at the end (as you don’t know how much liquid will evaporate off in advance). Serve.

Its ages since I made a cock-a-leekie soup. I'm going through a bit of a soup making phase right now so might attempt your recipe. I love the idea of adding prunes - a tradition I've not come across before. Barley is perfect in this recipe.

I just made a pot of cabbage soup but this is on my list to try soon! Thanks for posting.

This is a remarkable recipe, made even more remarkable by the history behind the recipe. I never thought of cooking with cockerel before, but it sounds like a robust bird: like chicken, but larger. It sounds like it's lean enough to potentially be dry, but that certainly isn't a danger here.
You must log in or register to reply here.