Curious how cold / inclement weather has been that people have camped outdoors in? (In a tent, NOT in an RV or the like).

I often go to an annual gathering each Columbus Day / Indigenous Peoples Day (the second weekend in October) in New York state. The weather has ranged from balmy to mid-high 30s F (a few degrees above zero, C). Last time there was 2018, and it wasn't held 2020, or 2021. The setup is such that if you want to live in a dorm bunkhouse setting, you can - but I always tent as I am a light sleeper and one cannot avoid the snorers.

At this gathering, food is supplied, and since we can't set camp fires there, I eat the supplied food, which is usually pretty good.

But there have been some interesting times.

There's a photo somewhere around of one of our group paddling a canoe through the main outdoor gathering region.... it had rained that much. I and my friends had camped on the other side of the stream (which was now nearly a river) and had precarious times crossing the thing. There was the night (a better weather year) where we were awakened by a pack of incoming coyotes. I knew they weren't going to attack, but the howls were coming closer - my city buddy was very unnerved! I do bring many blankets and a good solid sleeping bag.

Then there was the camping event on the far west of the state, essentially almost in Ohio, where I set up my tent upon arrival one late Saturday night. About three hours later, a storm raced through. Ah, good, my tend is fine and intact. I went in to sleep, and fortunately put the bag with my clothing and camera and such up at the far end by my feet. I blew up a sleeping mattress, and nestled down. Ah, another storm front raced through, and my tent semi-collapsed. Well, nothing I could do in the dark, and it was dry enough where I was... woke up at dawn and everything was floating, except fortunately the bag up to the right of my feet. My air mattress was floating. (And yes, I was on a higher ground... It was the way the tent fell and siphoned water in.)

It rained for the rest of that week. Seriously, every day. ALL day. On the final day, when I availed myself of the camp showers to divest myself of the mud before the 7 or 8 hour time to drive home, the sun FINALLY came out.

I did a lot of cold weather camping back in my 30s in a tent, often backpacking into the wilderness. I had good gear, and knew how to stay dry, so I never had any issues. In my 50s, I used a lot of the same practices with my teardrop camper, which was basically a tent on a trailer.

When wilderness camping, coyotes were a constant annoyance. They never bothered us, but I did pack a .357 Magnum revolver on wilderness trips. Better safe than sorry. I only used it once, to shoot at the base of a tree next to an unusually aggressive coyote, and a couple of tag-alongs. The tag-alongs ran away, and the aggressive one turned and left after them.

I went on a group camping trip one time, and there were about 40 tents set up. A strong "pop-up" storm rolled through. I sat in my tent and read a book, while listening to screaming and chaos outside. People were abandoning their collapsing tents and running to their cars. After the storm, I came out of my tent and most of the tents were flattened. Smugly, I thought, "My $600 tent doesn't seem like a big waste of money now, does it?"

We gave up tent camping years ago.....it wasn't so much the temperature that we got fed up with, but rather the constant dampness. Which of course meant everything felt cold and you could never get warm. I think we only ever had one dry holiday in a tent - and actually that one was great but it was the exception rather than the rule and we just got fed up.

Not many people camp here in the winter - most campsites are closed and wild camping isn't allowed in most places. We've been sub-zero in our motorhome multiple times though, and I especially love it in the snow: the contrast of warm and toasty inside (and dry!) with the snow outside is lovely. 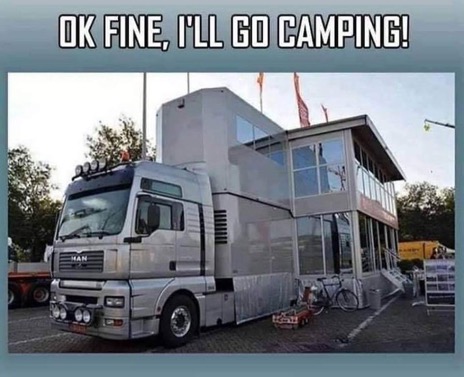 yep. We used to frequently. As in every year from our late teen's through to about 10 years ago. So best part of 20 or more years every winter over Christmas & New Year we camped for 2 weeks, even the year we got married (over Christmas).

One year went down to -20°C. That was an amazing year - all photos are old school film though. Everything sparkled in the torch in the morning. Every surface covered in ice crystals - over the sleeping bag, the tent...

Food was a case of ensuring it was in the cooking vessel the night before. So kettle full of water ice. Porrige soaked in milk then frozen in trangia (that's the name of our cooking stove and despite all the literature, it can run on meths but not much use in very cold temps, It usually runs on gas in this household but at -15°C gas won't light or if it does, even the 4 season stuff won't boil water, so we also have the petrol/ethanol high pressure system that we can run off, if it burns, it can use it (assuming its liquid). You slept with a flask of boiling water as well. That was simply to ensure if you wake cold during the night and when you actually woke, you had a hot drink available within a few minutes. A very good flask was a necessity. The Last thing you wanted was a flask leaking and getting your sleeping bag wet.
You get into a routine in those conditions but ironically despite their hardships my experience has been great. Much better than +2°C and rain, trust me.

I've solo camped wild for a week at -15°C and that was much harder than the week spent with hubby at -20°C. still very enjoyable and I remember it fondly.

All our kit is the expensive stuff though. The buy once (each) in your life time. Sleeping bags that are 5 season bags suited to -40°C, downfilled insulated sleeping mats, serious quality arctic tents designed for snow & wind and for above the arctic circle. Many a time we've been the only tent standing after a really bad storm.

Wolves were the only real threat we encountered but for us they were not a problem. Paw prints in the snow around the tent. heard them howling at night (in the distance) but we wild camped away from livestock and with us not eating meat and never leaving anything out etc We never had any issues.


MrsDangermouse said:
Not many people camp here in the winter - most campsites are closed and wild camping isn't allowed in most places. We've been sub-zero in our motorhome multiple times though, and I especially love it in the snow: the contrast of warm and toasty inside (and dry!) with the snow outside is lovely.
Click to expand...

see above. Plenty of tent camp sites open in the Lakes & Scotland all year round and by New Year they were usually full, totally full. And wild camping is permitted, even in the Lakes. you just have to know where. We never had any issues. In fact we've had park rangers drop in on us to check we were OK & knew about the snow coming... (that was in the Lake District above a certain height where overnight camping is permitted if you know the rules completely...helps we used to live in the Lakes!) He left happy that we had suitable kit including crampons & ice axes. We've used the crampons many times over the years in many countries. Never needed the ice axes for emergencies though it was enormous fun learning to use them for that purpose (especially with crampons on). A good friend ensured I knew how (ex SAS & arctic survival expert).

MrsDangermouse said:
We gave up tent camping years ago.....it wasn't so much the temperature that we got fed up with, but rather the constant dampness. Which of course meant everything felt cold and you could never get warm. I think we only ever had one dry holiday in a tent - and actually that one was great but it was the exception rather than the rule and we just got fed up.
Click to expand...

For me, it was a matter of my aging body not getting along with a sleeping pad on the ground. I would sleep well, but would wake up in the morning pretty sore.