This soup really needs fresh sweetcorn off the cob, and plenty of it, perhaps much more than the 6 ears of corn suggested. We had to make it with frozen sweetcorn and the difference was very obvious and disappointing. 1 ear of corn yields roughly 100g of sweetcorn if you do need to use frozen corn instead.

You can prepare the roasted red peppers ahead of time which I would recommend. You'll also want to find a suitable protein source to supplement this soup if it is your entire meal. We found that fried soyabean tempeh worked exceptionally well but any type of tempeh (chickpea, blackbean, linseed) would also work.

If you don't microwave the corn, ensure that you reuse the cooking water to retain some of the corn flavour.

Method
1. Prepare the roasted red peppers by cutting into thirds or quarters along the naturaI 'seams' of the red pepper and deseeding them. Next place them flat under the grill, skins up, under the highest heat and char the skins. Place the red pepper pieces in a sealed bag for about 30 minutes, until the skins are easy to remove, then cut into long, narrow pieces, roughly 5cms long and set aside for later.
2. Cook the corn on the cob in the microwave by placing them as they are still in their skins in the microwave and cooking for roughly 8-10 minutes on maximum. You may need to do this in 2 batches of 3 cobs. Each batch will still take 8-10 minutes. Then leave the cobs to cool, again exactly as they are before pulling off the 'strings' by gripping the very bottom or stem only and taking hold of as many of the strings as possible and pulling gently. They will come away in one go much more easily this way. Now remove the remaining leaves from around the ear of corn and cut off the sweetcorn from the cob over a bowI. Repeat until all of the sweetcorn has been collected.
3. In a large saucepan, heat the olive oil adding the onions and garlic and cooking until they start to soften. When they start to stick to the pan and gain brown spots, transfer them (with the aid of a little of the veg stock if needed) to a liquidiser and liquidise them and all but 100g of sweetcorn, the cayenne pepper and as much or as little of the vegetable stock as needed to form a thick puree that is velvety smooth. You need it velvety smooth in order for this soup to work. Return the puree to the saucepan and thin with the remaining veg stock and soya milk. Watch you don't over thin the soup. You need it to be reasonably thick but not standing up by itself!
4. Now reheat the soup and simmer for about 10 minutes, season and then allow the cool and stand for a minimum of an hour before assembling the soup in the serving bowls and serving. To assemble, pour the room temperature or warm soup into the bells and then add the reserved sweetcorn and the red pepper strips plus any protein you may be serving it with. 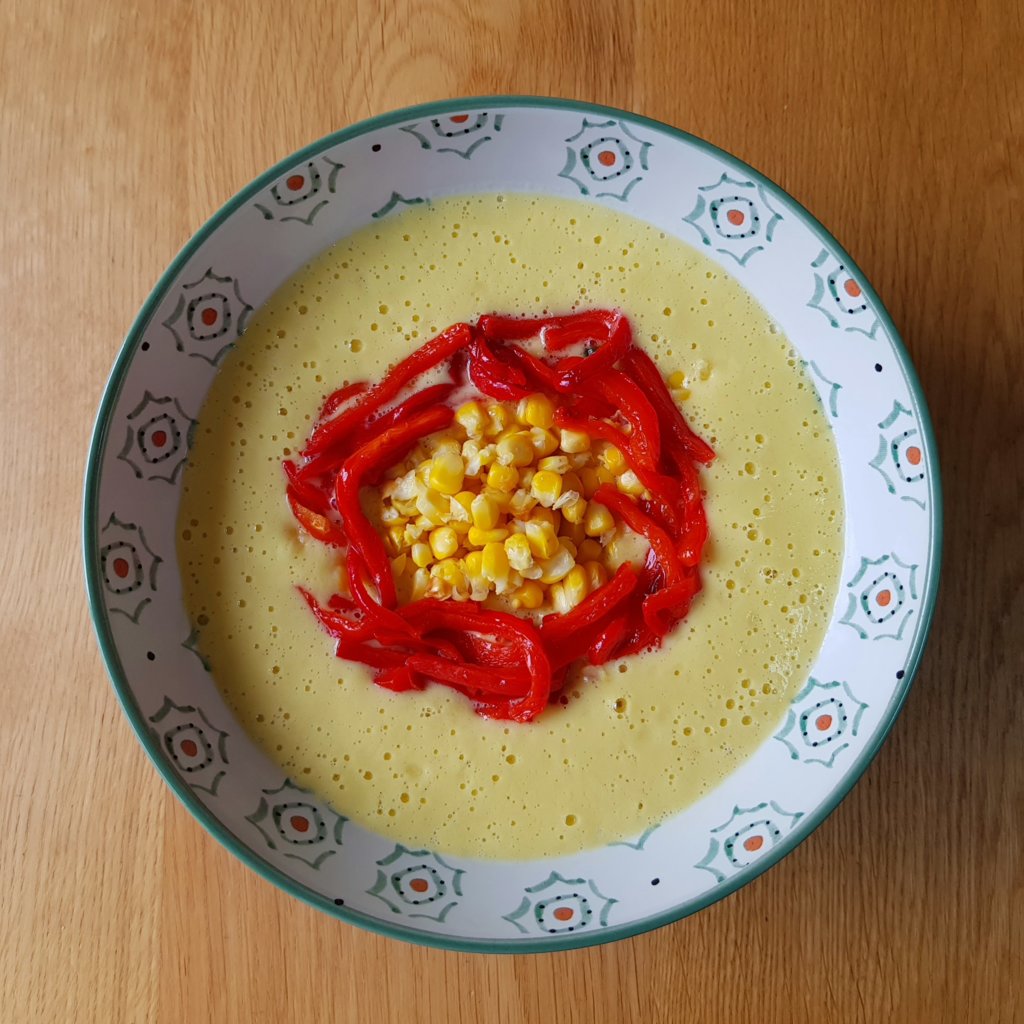 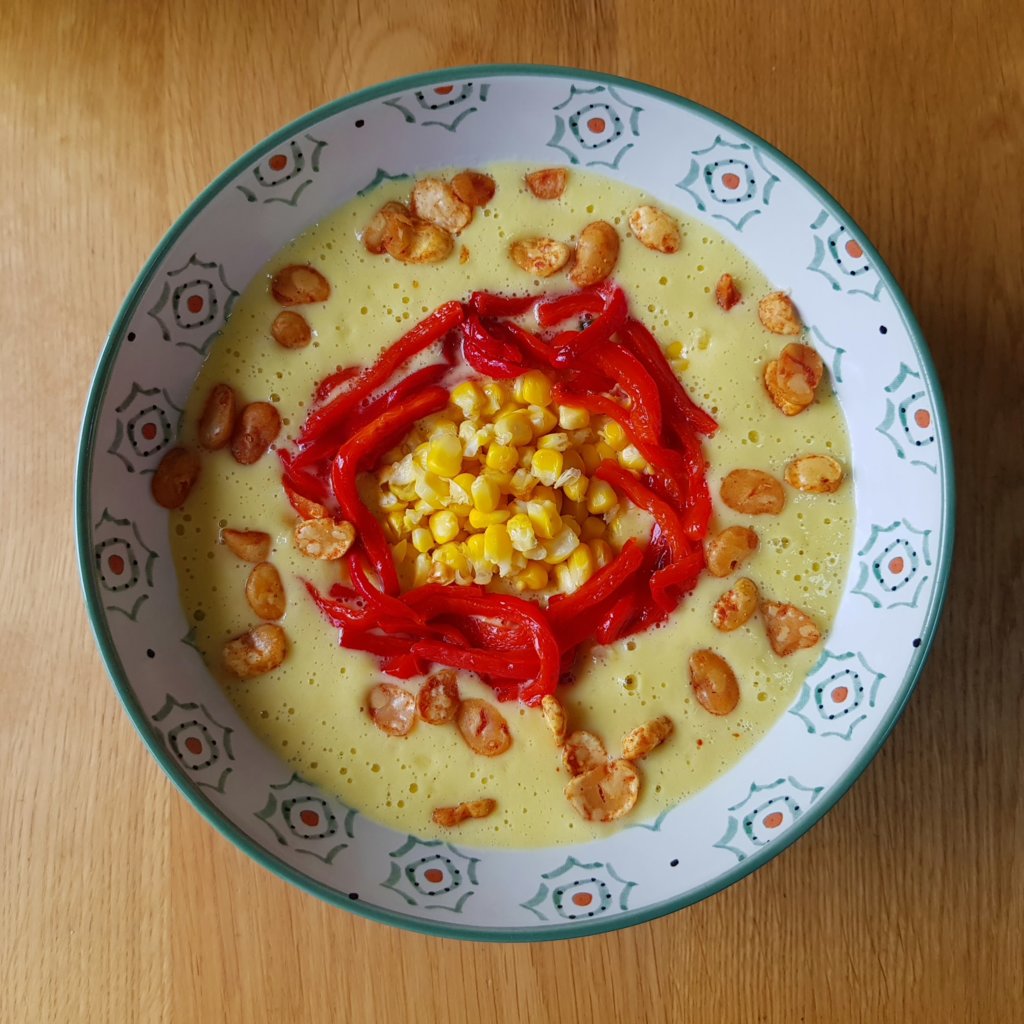 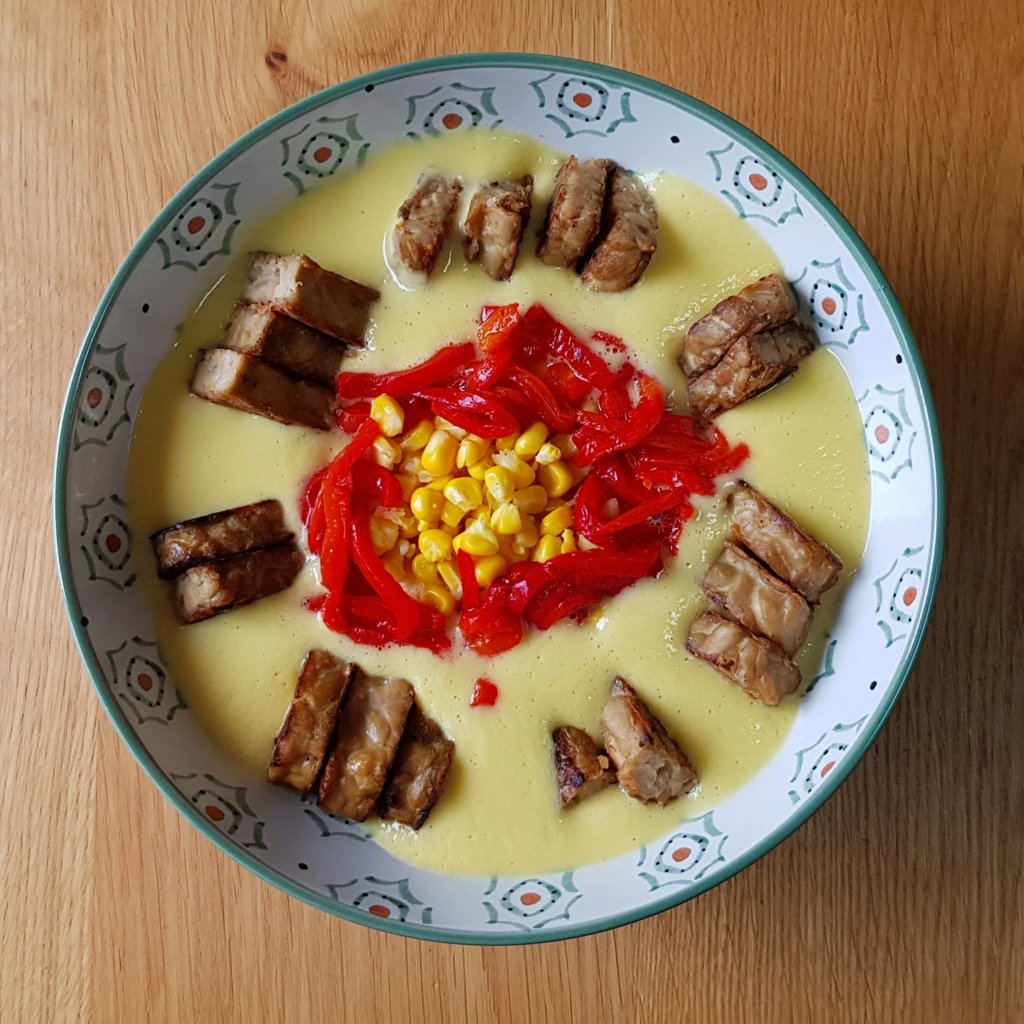