We ate a lot of mashed potatoes growing up, three or four times a week, easily, and whatever happened to be left over, Mom fried up into cakes as part of breakfast the next morning.

Very simple, this is hardly a recipe at all:

INGREDIENTS
Leftover mashed potatoes, cold
3 TB of fat (I used a TB each of olive oil, butter, and bacon fat)

DIRECTIONS
Heat fat in a skillet (cast iron, if possible) over medium-high heat until shimmering.

Form some of the mashed potatoes (maybe 1/3rd cup) into a small patty, about 1/4-inch thick, and gently lay in the hot fat in the skillet. Reduce heat to medium.

Fry for several minutes, until bottom of cake forms a golden crust (checking occasionally using a spatula to lift the edge - careful, the cakes are fragile).

When crust has developed, use a spatula to flip cakes and fry for several minutes to a golden crust on second side. Serve immediately.

Note: Mom would sometimes mix in a beaten egg to help bind the potatoes, sometimes she'd dust them in a little seasoned flour. It's an easy recipe to customize. 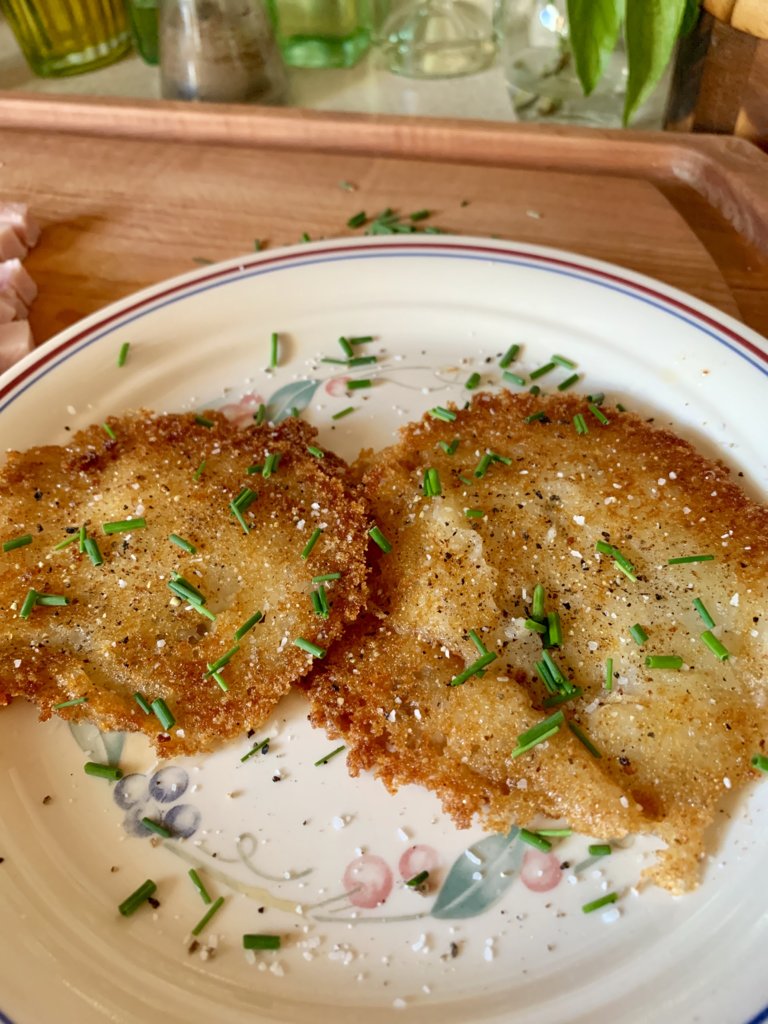 I love potato cakes of all kinds. Yours look deliciously crispy. I find they're a great 'vehicle' for herbs and spices.

morning glory said:
I love potato cakes of all kinds. Yours look deliciously crispy. I find they're a great 'vehicle' for herbs and spices.
Click to expand...

They're so versatile. Those would be nice with a bit of creme fraiche (though we'd never even heard of that when I was a kid), or a bit of curry ketchup, or with some cheese mixed in, or topped with an egg...you can do almost anything with them.

My mom always made lumpy mashed potatoes. She was a trendsetter, apparently, because a few years later, "smashed" potatoes became all the rage for a while.

Anyway, we were all sitting around the table having supper on Sunday. There were my parents, my grandparents, two of my brothers (both with wives and kids in tow), my sister, and her fiancé.

Her fiancé, Kirk, didn't really mesh well with the family. He was outgoing and could be considered something of a smart-alec, but he always meant well - it was just his personality.

One of my brothers was home from the Army, and he'd never met Kirk, so he wasn't really used to him.

We were sitting around, plates full, starting to eat, when Kirk, after a bite of mashed potatoes, joked, "Hey, Nancy <my mom>, I see you included the lumps for free!"

Without missing a beat, my brother reached around and punched Kirk in the side of the head...hard.

"Maybe you like that lump on your head a little better. Now apologize or we'll go outside and you can get a couple more!"

Brilliant - if rather brutal!

Love mashed potato cakes. I always add extra salt and pepper, plus a little flour, then make balls, roll them in flour, flatten and fry, preferably in a mixture of bacon grease and oil. My mom used to put in an egg as well and I did too for a long time, but then didn't one time, and found we liked them better without the egg.

Craig loves potato latkes. We used to have a small local deli chain that made little football shaped ones, but they all eventually went out of business. I found a recipe, but it was from the restaurant and makes a HUGE amount. I've cut it down and made them a couple of times, and they were pretty darn close. Guess I should make some more for him.

Wanted to add, we'll be having Korean potato cakes later next week as part of banchan for bulgogi. They don't start as mashed, but raw and processed to a paste in food processor or blender. Interesting looking recipe.
You must log in or register to reply here.
Share:
Facebook Twitter Reddit Pinterest Tumblr WhatsApp Email Link
Top Bottom