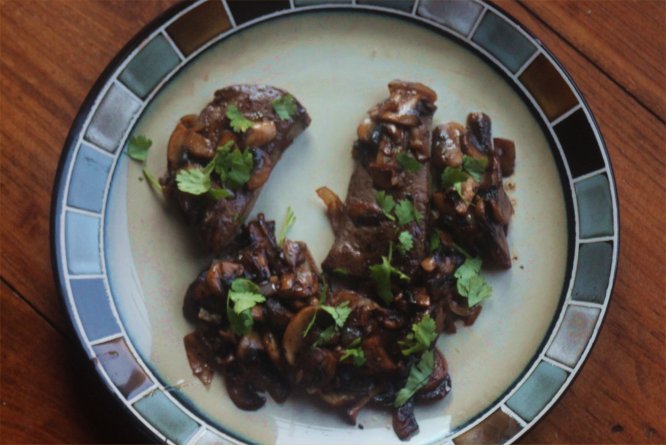 This was one of the few meats I did not enjoy as a child. I still can't say I'm crazy about it - but there was some in my freezer, a product of asking for the odd bits during last year's beef share. It was time for it to be eaten. (Or maybe shared with the chickens, as Serenity doesn't care for anything other than poultry as far as she's ever let me know. But then again she's not seen beef liver yet... maybe she'll think it came from a very large chicken?)

(Mind you, chicken liver pate can be made great, and I love haggis, which is partially sheep's liver - but this organ has been transformed into something totally different in those preps.)

Do keep in mind that the liver is the detox organ of the body - only buy and use liver from always-free-ranged animals. Better to go without than to go with a lesser quality liver source!

If you are going to cook it as per a steak, you need to remember to cook it rare to medium rare. The longer it is cooked - the tougher it becomes, almost immediately. At least Mom and Dad knew how to cook it properly, although I still didn't begin to appreciate it until years later. Because this needs to be at least medium rare, don't make this with pig's liver, or chicken/turkey livers.

Decided to go a little fancy with the shallots and balsamic reductase. 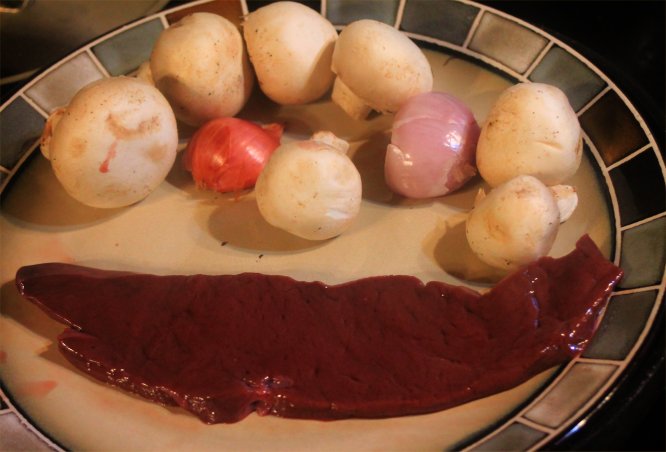 I was pleasantly surprised that this liver had been cut into small strips when I opened a package. Nice thin strips, about 1/4 inch in thickness, little more. YES! If it isn't, it will help to freeze it a half hour or so, to develop some firmness, then to slice it that thin yourself - if it is raw, thin slices are probably not going to work, at least using anything you are likely to have at home.


Melt the butter at medium heat, then add the shallots, stirring occasionally for five to ten minutes. Then add the mushrooms, and stir fry for another five-ten minutes. Add the tamari, balsamic reduction, and the cayenne pepper (as desired), as well as salt and/or pepper. Stir until incorporated, about a minute or so, then vacate an area in the skillet of the shallots and mushrooms, and lay the liver slices(s) flat. Spoon the seasoned shallots/mushrooms over the top, and allow to cook for 1.5-2 minutes - DO NOT OVERCOOK!

Remove the top layer of mushrooms and shallots, and flip the liver slices, returning the vegetables to the new top surface of the liver. Allow to cook for another minute and a half.

Plate, and serve, garnished with either cilantro or parsley.

Mountain Cat said:
DO NOT use pork or poultry livers for this recipe...)
Click to expand...

I like the use of balsamic here. There is a Portuguese liver dish (help LissaC?) called Ischas (or something like that) which uses vinegar.

I like the use of balsamic here. There is a Portuguese liver dish (help LissaC?) called Ischas (or something like that) which uses vinegar.
Click to expand...

Hello, yes it's called iscas and vinegar and white wine. I personally don't like it but I can translate a recipe if anyone wants.

LissaC said:
Hello, yes it's called iscas and vinegar and white wine. I personally don't like it but I can translate a recipe if anyone wants.
Click to expand...

Morning Glory said:
I would like the recipe, please.

At least in this country it is not recommended to serve pork anything medium rare. Although it can indeed be cooked less well done than we were instructed in the past! (Finally, pork tenderloin that isn't dried out!)
You must log in or register to reply here.