I've adapted a recipe from one of my cookbooks. It was a freebie cookbook from a hotel in Blackpool (Lancashire, UK). We found it on the bookshelf in the "common room" and started to copy some of the recipes down. It got to the point where I had copied so many that the hotel owner came over... A quick chat later and they gave me the cookbook. It's fully vegan (lifestyle & food) and their clientelle was mostly retirees wanting meat, 2 veg and gravy, day in, day out.

The recipe is based on "Rich Roll's Ultra Meatless Tempeh Loaf" in a cookbook called Living the farm Sanctuary Life by Gene Baur with Gene Stone.

So you'll need either a bottle of teriyaki sauce or a good BBQ sauce or 1 batch of the teriyaki marinade below. If you're watching sodium I seriously recommend making your own. I keep frozen minced garlic and ginger in the freezer (in ice cube sizes of about 1 tbsp) so I just used those. If you don't have them, I recommend considering a decent jarred version of each.

Weirdly the directions say to soak the tempeh (whole/as is) in filtered water for 30 minutes or more beforehand. I did do this and can honestly say I don't understand why this step is "required". It certainly made no difference to my tempeh which is not even vaguely dehydrated, so I'm omitting it from the method. If your tempeh is partially dehydrated, you may need to soak yours. In what kind of water is up to you.

Method
* tamari has a better flavour and much less salt then regular soy sauce so I don't recommend you substitute with regular soy sauce. It is also possible to get reduced salt tamari if you are desperately concerned about sodium content, but this is the only source of sodium. I've removed the added salt from the meatloaf.

You can make your own tomato sauce (as in tomato pasta sauce) if you want to or if you have a nice brand of a plain tomato & basil sauce, use a jar of that. If you don't have a high powered blender/liquidiser you could use ground almonds/almond meal instead. Otherwise presoak the nuts for up to 8hrs or more beforehand. My Vitamix has no issues with unsoaked cashew nuts so that's what I'm using.

The original recipe said to mold the uncooked tempeh loaf with your hands, in to the shape of a loaf in a large baking dish, cover with the sauce and then cook it. I wasn't convinced that mine would hold shape, so I cooked mine in a Ioaf tin, sliced it up and will bake it again as we want to eat it, coating each slice in the sauce before baking a second time. 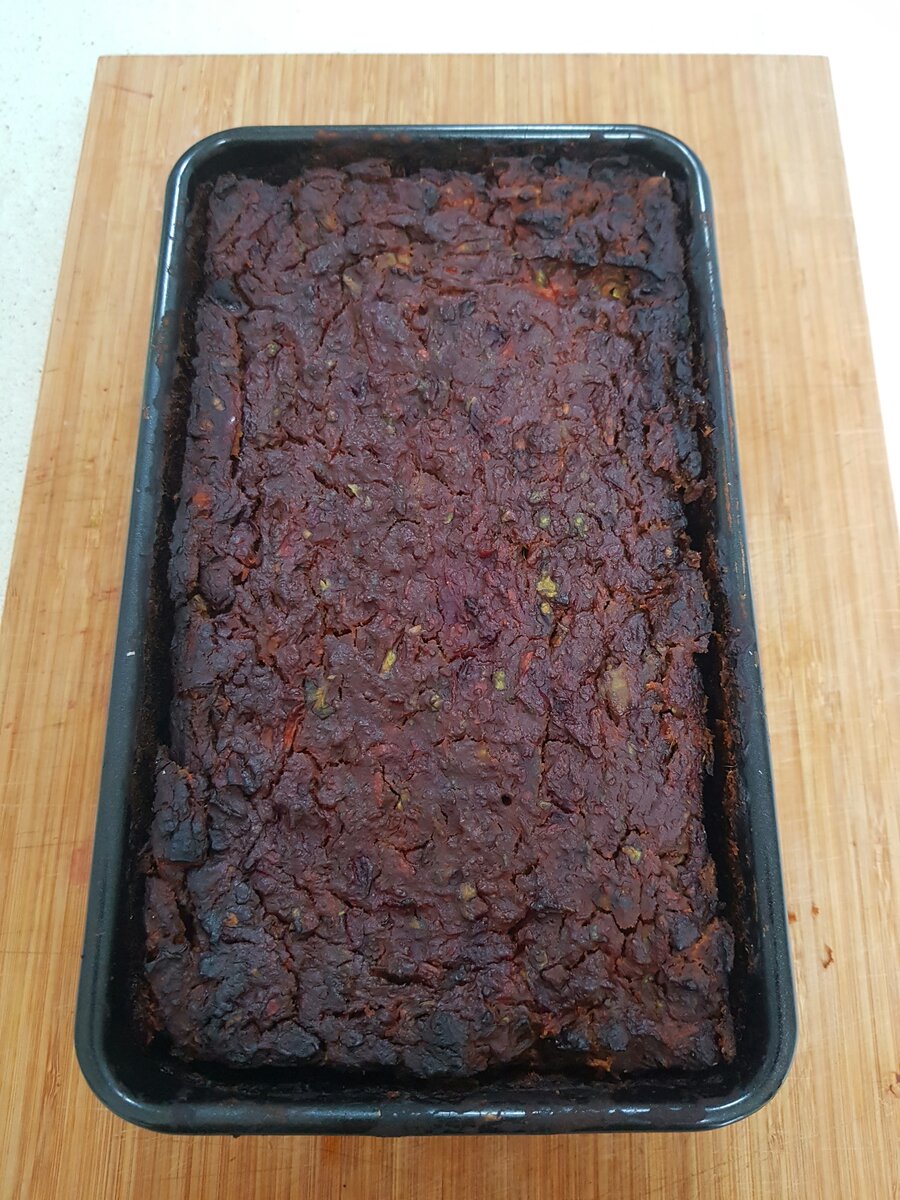 Tempeh loaf just out of the oven 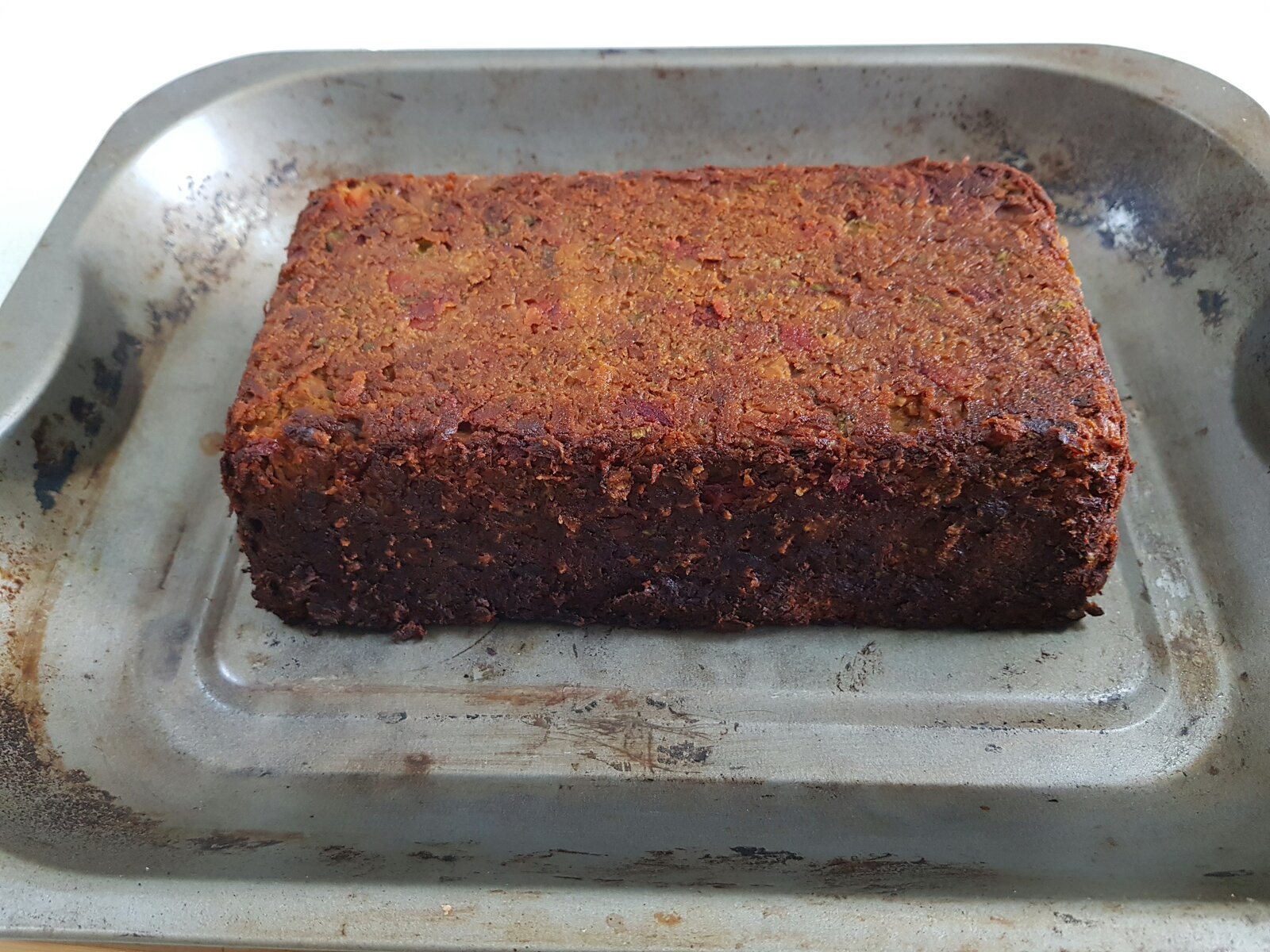 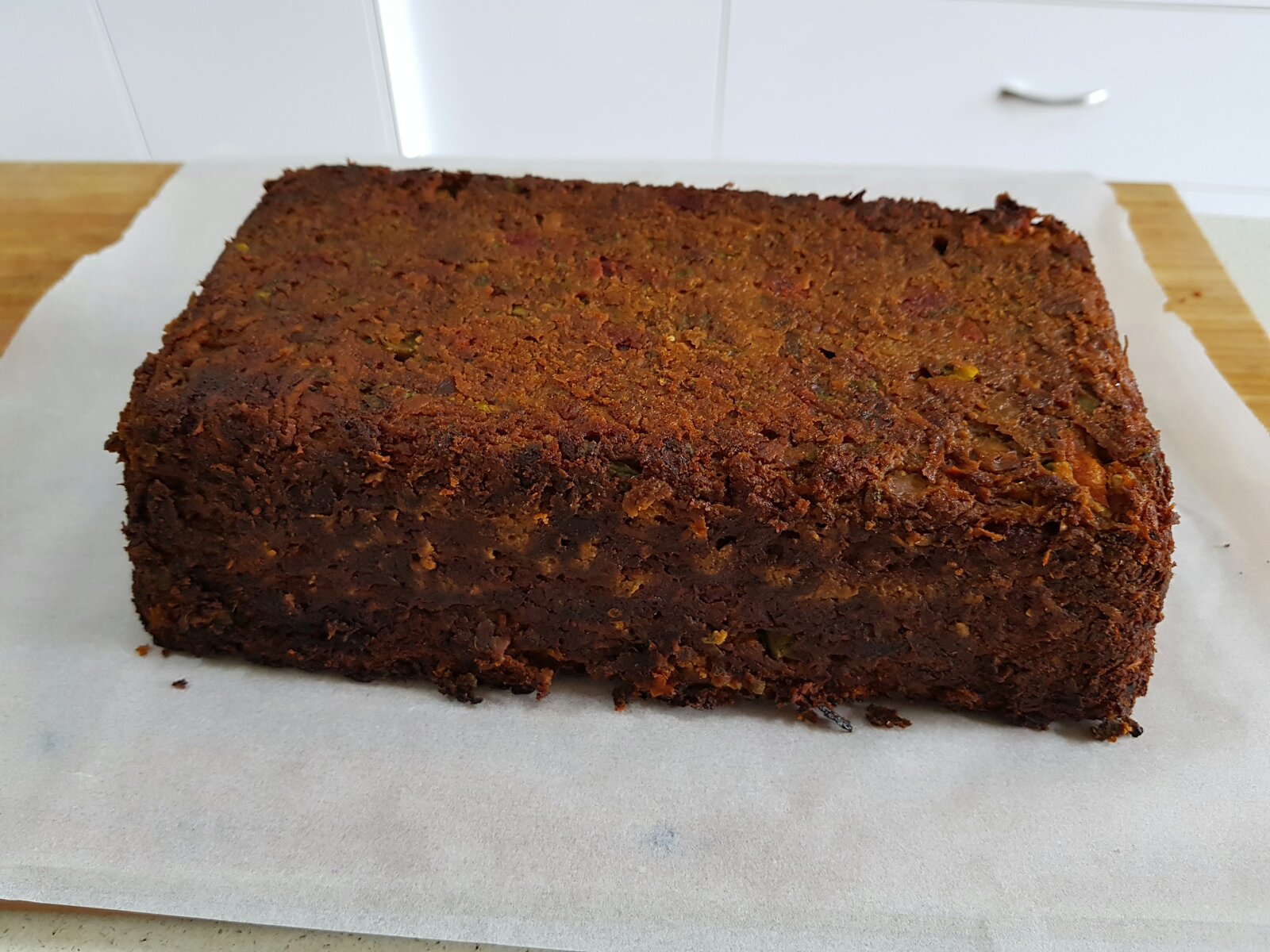 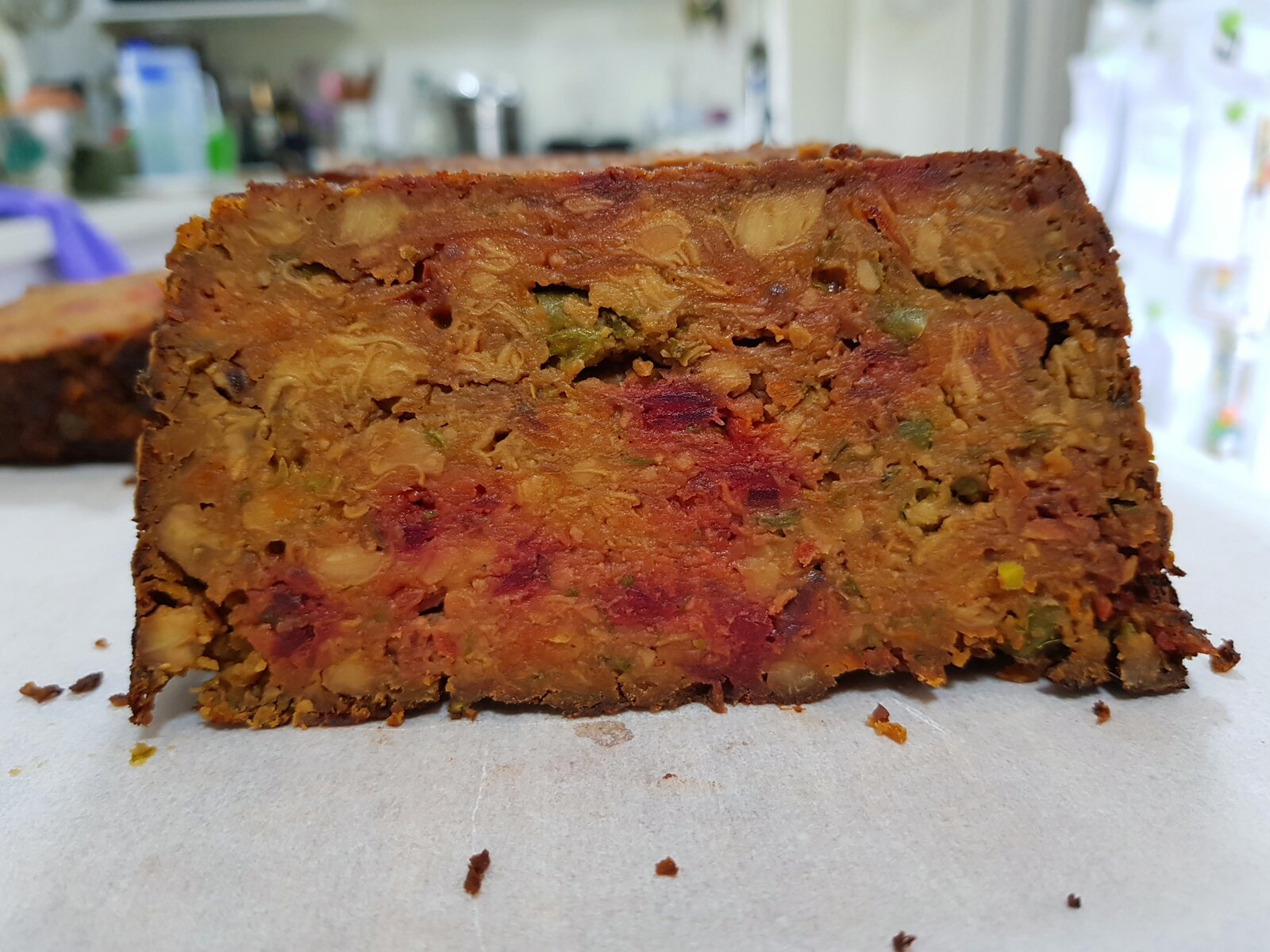 A slice of Tempeh Loaf 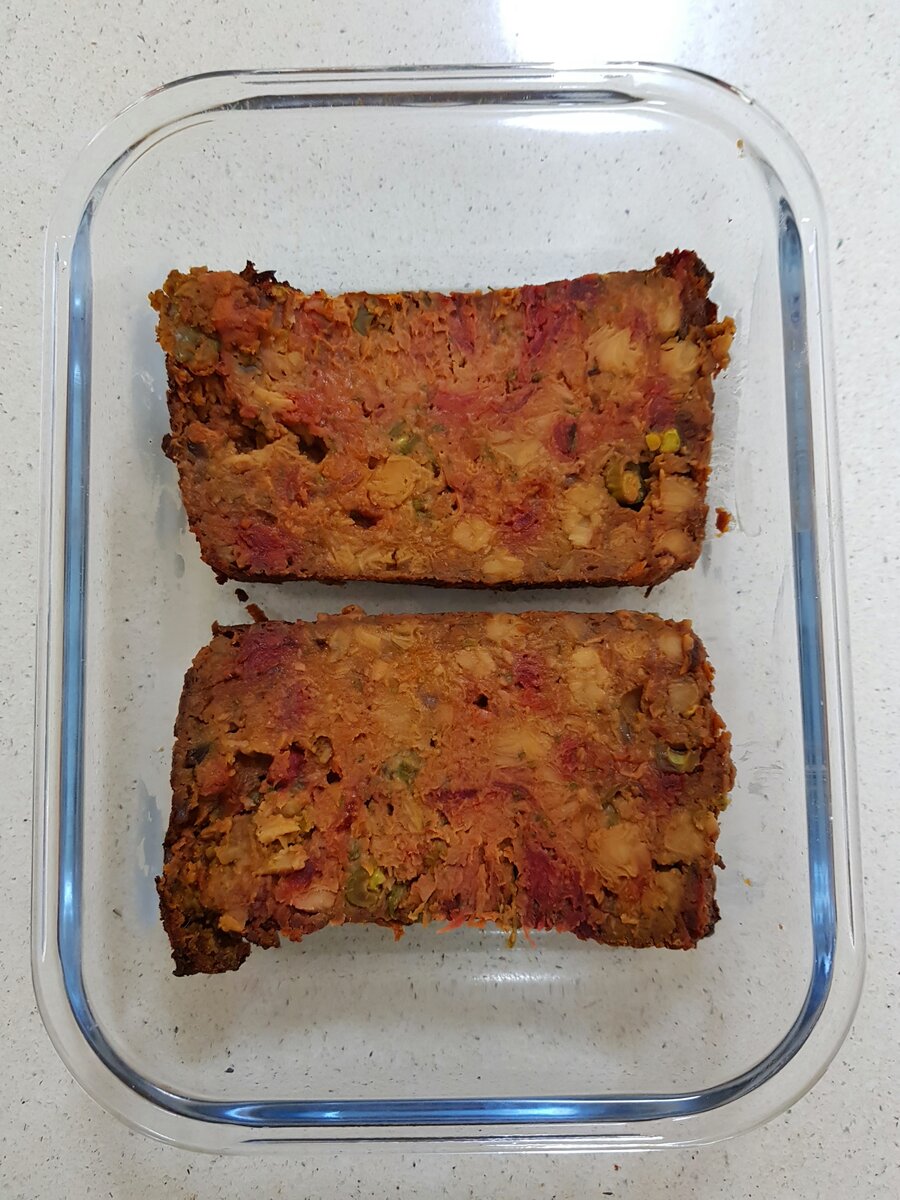 2 slices ready for the sauce 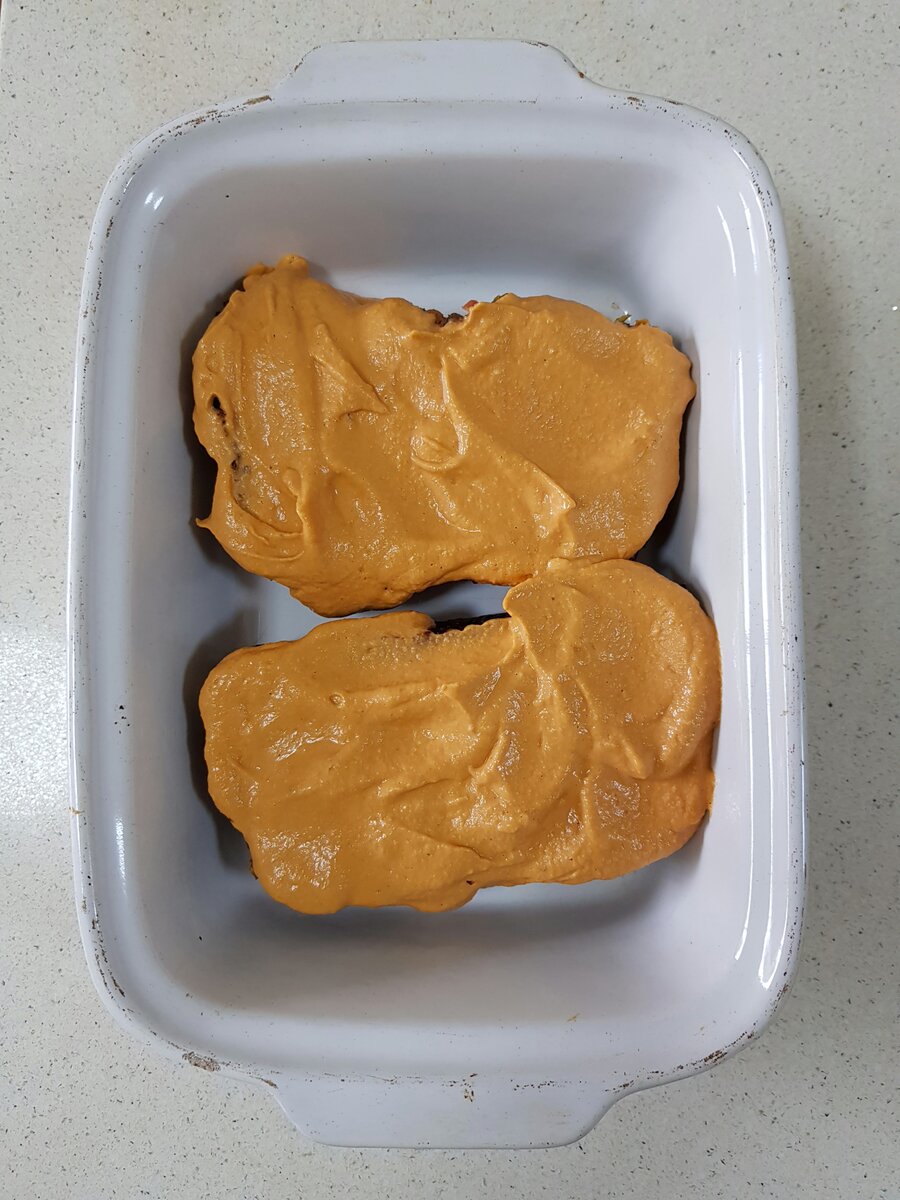