This is (will be) a review of the recipe for Mushroom Curry from The Silk Road Vegetarian cookbook by Dahlia Abraham-Klein.

There's a long list of ingredients here, but most of them are spices. Some I have had to grind myself because I simply didn't have or couldn't find them already ground. I made one or two substitutions. I didn't have any small brown onions, so used the red onions that needed using up. I didn't have a green apple and tbh, can't see why you need one. I probably wouldn't peel it next time round either.
I didn't have a jalapeño pepper, so used a frozen cayenne peppery defrosted. I don't even know what baby Bella mushrooms are, flat brown Portobello mushrooms were used instead and halved them sliced. Finally the coconut milk. I only buy coconut cream that is 100% coconut kernel extract. I just used that. The rest of the tin was frozen in a suitable container.

Finally the almonds. Nothing was going to get ½ cup of almonds to weigh 25g. Not slivered or anything. They came in at 75g. I just settled for that. I have to make my own here, blanching them myself then slicing them so mine are not roughly chopped! 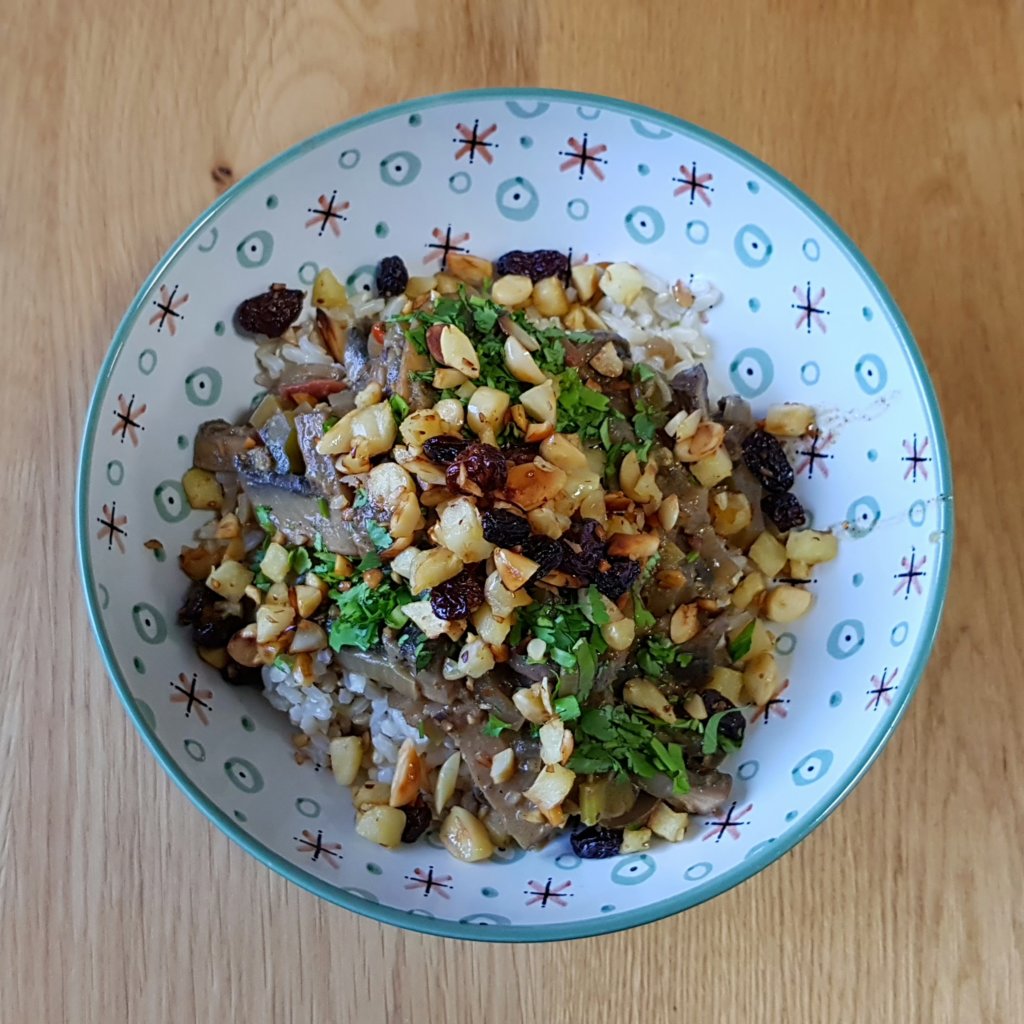 We used to get a mushroom sabji curry from a place that closed after the earthquakes, it was so yummy. With a creamy sauce and peas. I've saved your recipe and will try it after cup week. It's crazy here at the moment.

I must admit I find this recipe rather odd - dried fruit, nuts, tomatoes, mushrooms, apples and coconut cream. It doesn't sing to me - it sounds confused with too many ingredients which don't naturally work well together. Of course, I could be surprised...

morning glory said:
I must admit I find this recipe rather odd - dried fruit, nuts, tomatoes, mushrooms, apples and coconut cream. It doesn't sing to me - it sounds confused with too many ingredients which don't naturally work well together. Of course, I could be surprised...
Click to expand...

I was very surprised. It works really well. And somehow the coconut milk (I only use coconut cream because the only difference between the 2 of the brand I use, is added water!) brings the whole thing together.
We have had it 3 times now (the final time we added a tin of chickpeas to it to make enough for 2, that works really well as well). There that little tomato that it is hardly noticeable except for adding to the red flecks in the curry (my chilli was red). And sultanas/raisins are often found in curries, so that is hardly an odd ingredient to add.

SatNavSaysStraightOn said:
And sultanas/raisins are often found in curries, so that is hardly an odd ingredient to add.
Click to expand...

I know - as are apples in old Anglo Indian curries - but they are odd with mushrooms. Fruit & mushrooms is not an obvious combo.

Ok, my thoughts on the recipe.

Hubby thought it was too spicy which is unusual for him. I thought it was ok but close to what we manage but I was also aware that my substitute chilli may have been to blame. It was very tasty and one hubby said he would have again. The apple, almond and sultanas mix reminded me of the smell of homemade Christmas puddings, what with the mix of everything going on and although the spice mix was lengthy, it wasn't actually difficult even if one or two had to be ground especially for this recipe.

I needed to add water whilst the ginger chilli and garlic was cooking because they started to catch on the bottom of the pan. I didn't have the heat that high, but do have a thick stainless steel bottomed casserole pan which could have been the problem but water quickly resolved that issue. However, this would possibly be the cause of hubby thinking the sauce was too thin. It would easily be thickened.

Overall it was a really tasty dish that worked well over rice or jacket potatoes. It is most certainly one I'd make again and one we enjoyed.

Almonds are fortitutously one nut I CAN eat, although I'd personally be ditching the raisins. The seasonings sound awesome!
You must log in or register to reply here.

Thursday at 10:04 AM
Morning Glory