OK, this recipe has me intrigued. I haven't come across anything like it before. It uses the entire lemon, rind, pith and flesh, covered in sugar overnight in a fridge, then lots of eggs (always useful in this household) and pie crust which I am going to switch to sweet shortcrust pastry. http://www.countryliving.com/food-drinks/recipes/a3375/shaker-lemon-pie-recipe-clv0510/

Now the recipe says 2 cups of sugar which translates to 400g which strikes me as an awful lot of sugar, so I'm going to half it first time around and see what we have. The number of lemons depends of what you want and how big they are. I'll let you know.

So, not vegan, but vegetarian and dairy free....

I'll add the photos when I have made it!

The promised photos and review (well sort of, just an opinion of mine).

First, I used a sweet shortcrust pastry. After a lot of looking around at recipes for this lemon pie, there are a million and one different opinions but the vast majority use the American Pie Crust which I am not familiar with and being allergic to dairy, haven't really looked at making an assumption that could be wrong. So the recipe I used for the sweet shortcrust pastry wasn't as successful as I had hoped. It was sweet, it was definitely short and in a vague concept it was a pastry. I say vague because it was that short, it would have made a better shortbread, something I have missed since becoming allergic to dairy. This isn't anything to do with the recipe, it is to do with the margarine I used which is new to me. Margarine has a different water content to butter and each margarine or hard fat has to be learnt. Also margarine can be made with a variety of different oils (canola, sunflower and coconut being the most common here in Australia but in the UK it was often sunflower, olive or soya). I learnt with this one!

So the recipe I used for the sweet shortcrust pastry was

Method
Crumble the flour with the margarine (I did spot the problem here but failed to act!),
Mix in the sugar, and add the beaten egg. It should make a dough from here, if it doesn't add a touch of water or dairy free milk.
Now rest and chill for a minimum of 30 minutes.

On to the lemons.
This recipe failed to mention something that I picked up on in other recipes after I had made the pie. The lemons, used whole (though I sliced them in half length ways first) must be sliced as thinly as possible. The recipe I had chosen to follow totally failed to mention this crucial bit of information! It also wanted twice the amount of sugar (1 cup per lemon) than I was even prepared to consider! Mind you so did all of the recipes and this makes for a very sweet dessert even using half the quantity that they say.
Some recipes say to leave the lemons uncovered, some say to leave the in the fridge overnight, some say a couple of hours, others say on the counter for 24 hrs... Personally I would recommend that you leave them in the sugar for as long as possible, covered and on the counter. If I made it again I would certainly be looking at 24 hrs on the counter. I did 24hrs in the fridge.
Another thing mentioned in one or two of the recipes I found was not to use the rind and the pith. If you go down this route, you are going to have a very sweet pie with nothing to counter the sweetness. That pith and rind is needed. Keep it.

Sugar
Yeah. This is sweet even for me, though if you hit one of those thicker lemon rinds you will need all of that sugar.

Eggs
You may not need all 5. It will depend entirely on how much juice you have out of the lemons, from the sugar mixture and how big your pie dish is,

Arrowroot/Cornstarch
Whilst this is not included in most recipes, if you want a set egg mixture, you are going to need to add something to help it set. next time I will certainly be added around 2tbsp of Arrowroot for this reason.

Pastry
As mentioned above, I used sweet shortcrust pastry and I was glad of it actually. It made for it being a dessert and a pie, rather than standard shortcrust or puff pastry (I have seen one recipe say to use rough puff).

So making the pie.... some pictures. 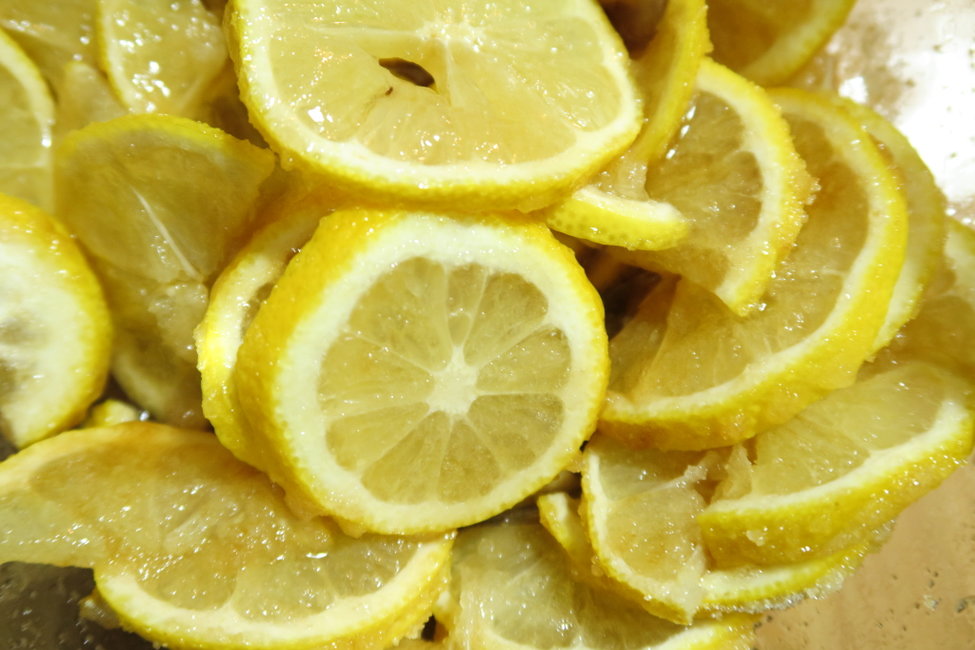 The sugared lemon slices - they needed to be sliced much more thinly! 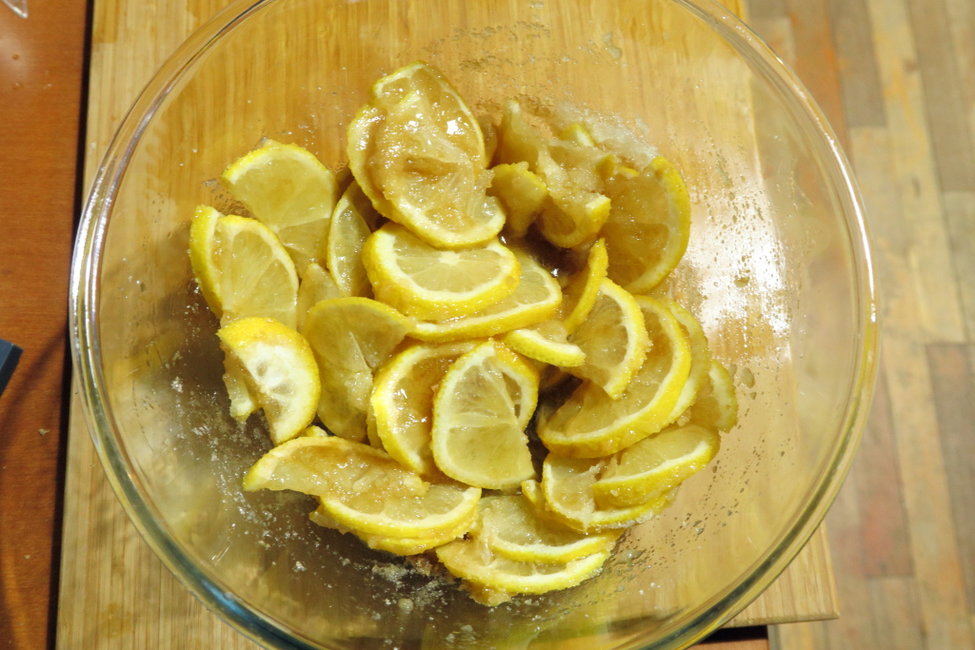 I used 2 large lemons and 1 small one.
Once the mixture had rested overnight, I removed the ends which were a touch too pithy for our liking. We were both glad I had done this. 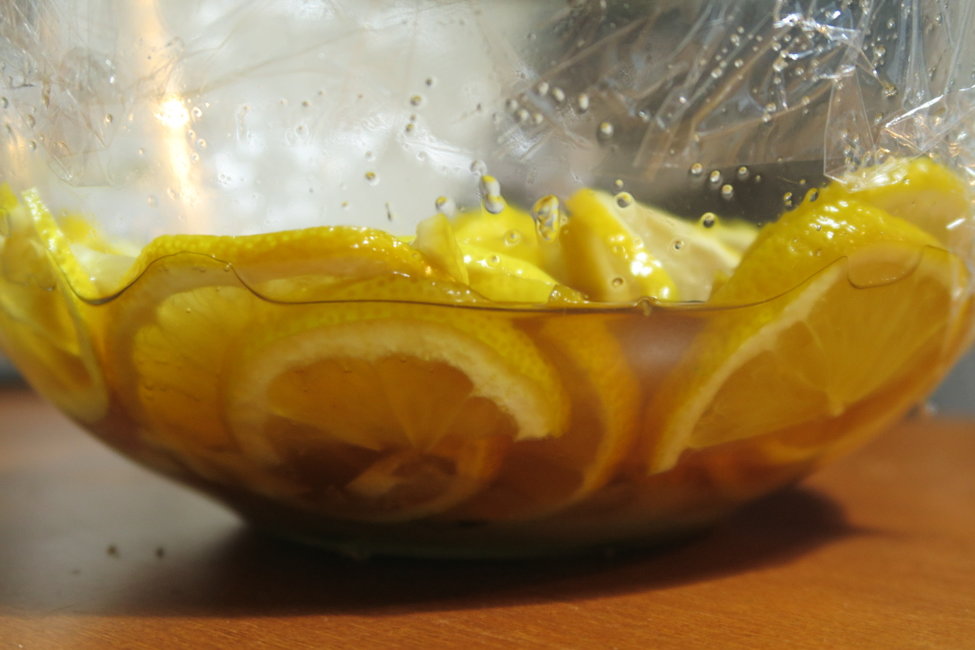 24hrs in the fridge and the sugar/lemon mixture has a lot of liquid in it. 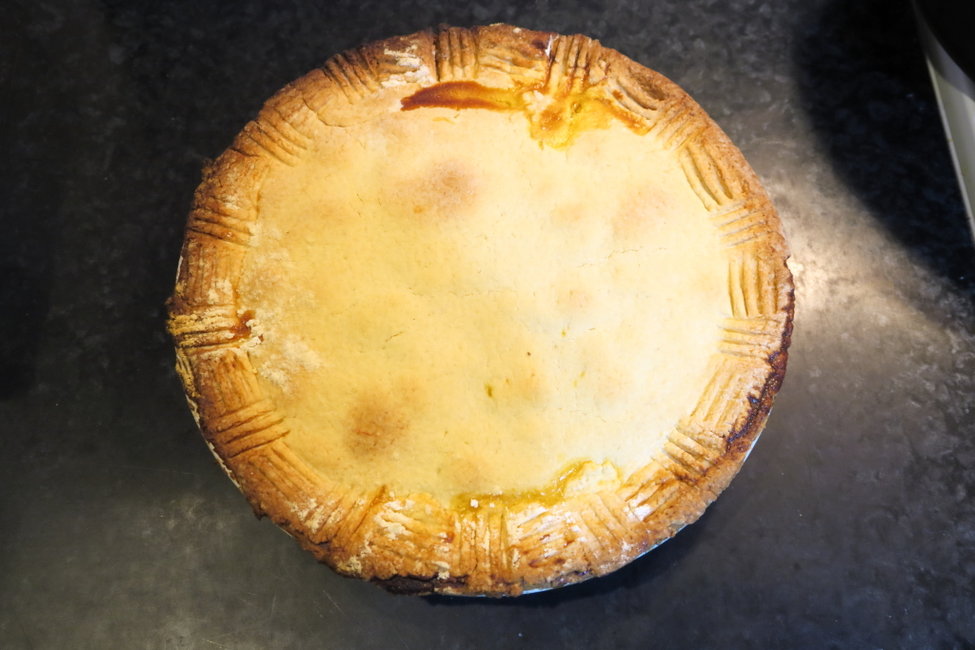 The end result was a very short, shortcrust pastry lemon pie which was very lemony and exactly to my husband`s liking.

Many things to note:
my oven is very uneven
my oven only goes to gas mark 5 (200C)
next time I will precook the lower pastry half. It was soggy and I don`t like soggy pastry.
I totally forgot to reserve any eggs to glaze the pastry.
my pastry was too short hence the joins
I probably should not have put those last few tablespoons of the egg/lemon mixture in...

I also baled all of the lemon slices out of the lemon/sugar mixture putting them into the pie dish separately. I then mixed the eggs with the remaining lemon syrup and poured the mixture over the sliced lemons.
I would probably put the lemons & sugar on the counter rather than in the fridge for 24hrs (assuming it wasn`t summer) and let them soften more.
I would definitely slice the lemons thinner!

Once the pie has set (hopefully it will do) I will try again for getting a slice out in one piece and photograph that for you!

But the all important question: Would we make it again? The short answer is yes! In an instant. I certainly wouldn`t use the 1 cup of sugar to 1 lemon ratio that every other recipe uses. I would stick with 2-3 lemons : 1 cup sugar. I would also add something extra to the egg/lemon mixture like 2 tbsp of arrowroot to thicken and hasten setting. We like our pies hot and this one had not set.

And finally, having let the pie cool I have been able to get something akin to the insides of the pie showing without them spewing out everywhere, now that the lemon custard has set. 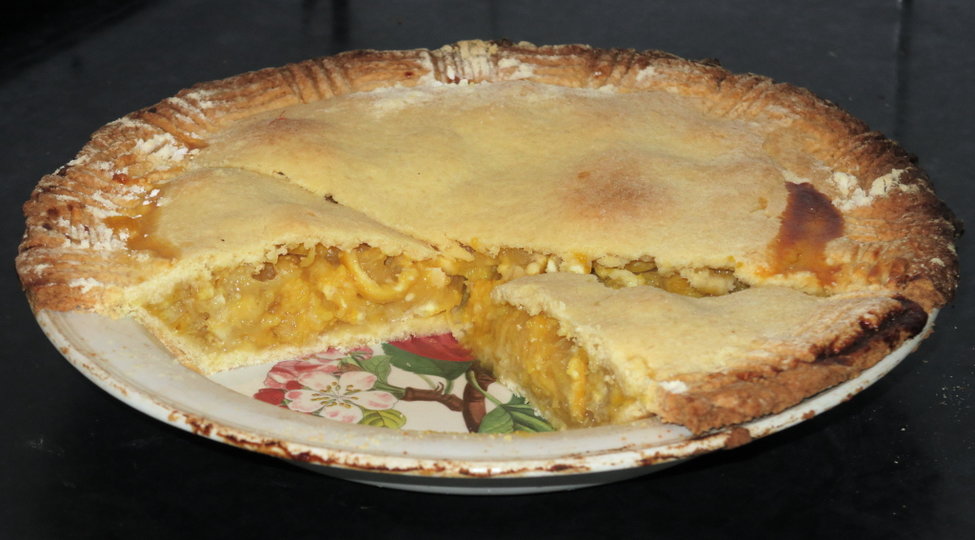 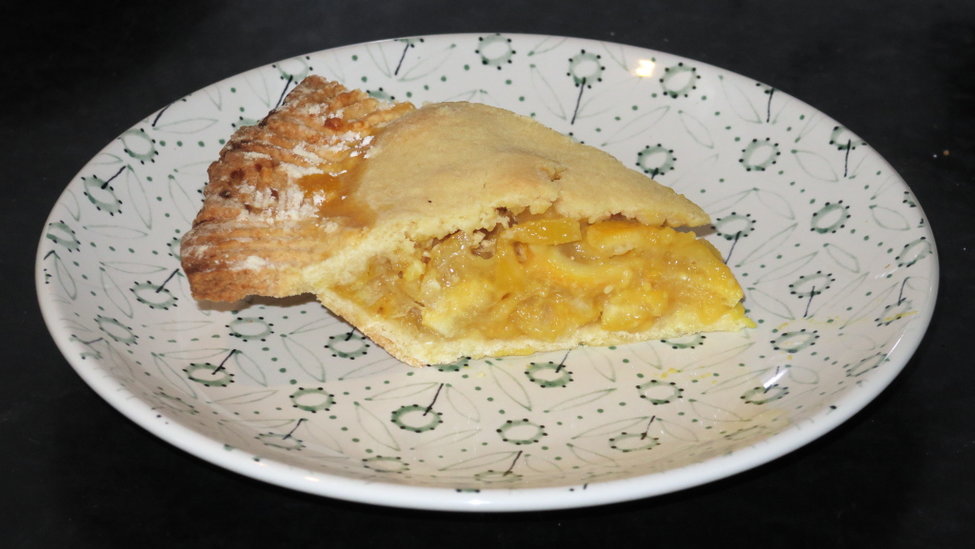 This looks great. Its the sort of dessert I would like as it could be made quite tart with less sugar (as you mentioned).

@SatNavSaysStraightOn,
In an American pie crust, you can use any fat you like. Most I have call for shortening or lard (lard is not vegan or vegetarian). You can also use your choice of cooking oil. The liquid is usually water.
Just mix fat and flour until it makes crumbs, then add water a tablespoon at a time until it forms a dough.
2 cups flour to a bit less than 1/2 cup of oil.
Or roughly 4 parts flour, 1 part oil. Roughly 250 grams of flour and 100 ml of oil.
You must log in or register to reply here.