So it's that time of year again...

British pancake day... I say British because well our pancakes are not like the American ones....

Traditionally the size of a dinner plate, served with lemon juice and caster sugar. 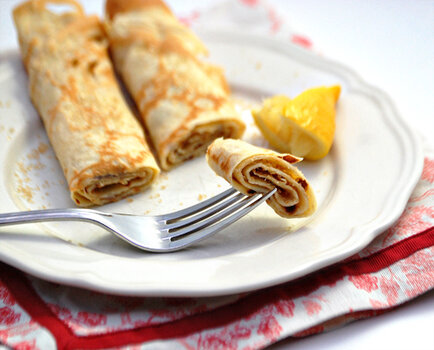 Method
Bung everything in a liquidiser and blend till smooth. You are aiming for something slightly ticket than double cream.

Cooked on my griddle (family heirloom)...
1 soup ladle of batter on a hot lightly greased (butter or last is traditionally used) griddle. Poured into the centre for that classic pancake look, then with a practice

flick of the wrist the excess is moved around the griddle to Cobbett the entire surface. Back on the heat, till the bubbles start to pop and it is browning.... Tossed to turn over

, hoping the ceiling is high enough and your catch spot on... Yet right, who are we kidding? Alternatively turn over with a spatular and brown off on the other side if it is still in one piece!

Serve immediately with plenty of halved lemons and caster sugar...

So what variations do we have put there amongst the British folk? Do you even 'celebrate' it?

If we remember, we'll have pancakes. Possibly some savory, filled with cheese, or tuna mayo, and some sweet with sugar and lemon, or perhaps we'll splash out of a bottle of maple syrup. In that case. I may even eat some banana chopped up with it.

Thanks for sharing this recipe. We do celebrate Shrove Tuesday here in the Caribbean. Making pancakes for breakfast on that day is also a tradition here. However, the pancakes we make are the ordinary type that we would normally do at any other time of the year. Flour, baking powder, milk, egg and butter are all blended together in a bowl, and the pancakes are then done in a frying pan until brown on both sides. They can be done in various sizes, but are no where near the size that is shown here. They are then served with either honey or jam spread over the.top.

Mu mum always did us pancakes on Shrove Tuesday, TVC and I don't bother though, at work all day so when we get home we want a proper meal. 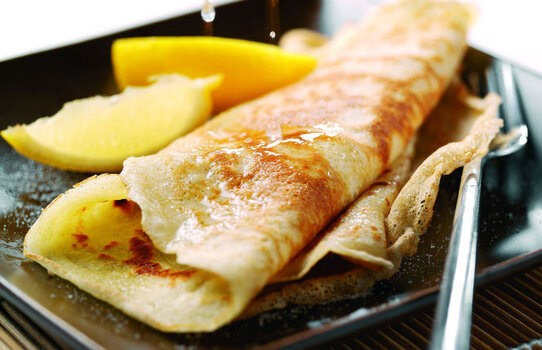 I like to fold a few squares of chocolate up in mine and leave them to melt for a minute before eating.

My colleague lives with her partner and their 2 young children and she was complaining about the trouble of making them, you do 1 then that is eaten as you make the next one and so on, I pointed out to her that she could switch her oven onto a low setting and put the pancakes on a plate and keep them warm in the oven so everyone can eat together. Apparently that is an even bigger headache

We eat them as they are made. In turn, that was always the way my grannie did it and whilst we have tried the oven approach it just isn't the same.

Now with only 2 adults, I make one, give it to my oh, set mine going and com that, put it on my plate, set his going and go off to eat mine. He keeps an eye on his, turns it over as I eat mine and I'm done ready to make and eat my next one as he takes his off the griddle.

Of there more than 2 of us, I pull the tawa into use as a secondary griddle, but I do prefer to keep the tawa grease free. From that point it works much better for my dosa...

When I was a student, we had a pancake party one year in our shared house, with me and a friend doing the pancakes. We ran out of eggs twice and had to send people out for more. it was about an hour in that we realised we hadn't had one ourselves yet - whenever one was ready, someone was standing there with a plate out... (so we downed tools until we'd had a couple each).
You must log in or register to reply here.
Share:
Facebook Twitter Reddit Pinterest Tumblr WhatsApp Email Share Link
Top Bottom