Beautiful full moon this morning, I kept stopping to look at it

Lullabelle said:
I would be worried about standing on one and squashing it.
Click to expand...

Lullabelle said:
I would be worried about standing on one and squashing it.
Click to expand...

That's why they end up being 'kicked' across the kitchen floor instead. Because we don't pick up our feet but shuffle! However given that the new sofas arrive on Wednesday, we have made the decision that they will be moved to the mud room for the next week and hopefully by then they will be old enough to be outside at night. If not, I can rig up the heat lamp outside, but inside their cage inside the chook house that is down by the garage, rather than the main chook house.

We're hoping that the air quality will start to improve soon. They have forecast 7 days of rain for us in the form of thunderstorms... But if we only get 1 day of what is forecast, it should dampen some of the fires which are all still burning. Today was another day locked into the house with doors and windows and blinds all closed. I'm beginning to feel like I live in an internal apartment block with no ventilation or windows! Natural light is a thing of the past.

Last night we watched a programme called catching a killer, I was aware of the story as it had been on the news but this was told from the police investigation. really good, sad but respectful to the victims and their families.

the air quality is weird at the moment. Remember, live rurally on a 600 hectare sheep farm(with no sheep because it is too dry to support any livestock at all, so the farm has been closed forthe time being).
My new air purifier, something we have had to resort to to keep me out of hospital, breaks down the pollutants by type as well as including humidity, temperature and so on. Many of the types were totally new to me. I've never looked into air quality before, so PM2.5, PM10 were new to me. I understand the concept quite easily itis just particulate size of 2.5 microns and 10 microns in diameter.

The size of particles affects their potential to cause health problems:

And It has been the PM2.5 in particular that has been causing a lot of the problems with air quality until yesterday. Something changed yesterday and whilst the air looked better, it had a parculiar taste to it andI was getting many more dizzy fits. The air purifier was also working overtime and one of the other things it monitors and cleans NO2 (Nitrous dioxide) were off the scale. Something somewhere is burning and it is not bush. Now I mention where I live because NO2 is typically associated with vehicle exhaust emissions! How they are off the scale is beyond me. , Weirdly, none of the other things it monitors are high, the other being VOC (volatile organic compounds) which is generally burnt cooking in a kitchen but typically are nasty chemicals such as toluene (solvent). Right now, it is just NO2 that is causing problems. Grr... It's fascinating (to me at least as a former scientist) watching which part of air quality is affected at my rural have on a daily basis but I really do wish it would go away now.

Even if we get all of the rain forecast for this next week the Rural fire Service have said it will not be enough to put out the larger bushfires and Canberra and Sydney are both surrounded by some very large bushfires.

We have finally gone hi tech! 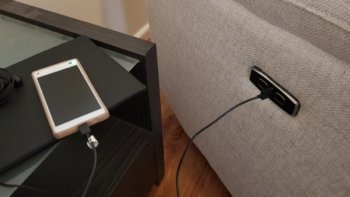 We have finally gone hi tech!

I hadn't appreciated that when we ordered the new sofas they came with built in USB charging!
There's a family joke that as the IT Engineer in the family, I'm always the last to adopt technology (primarily because of the locations I live in make it quite difficult at times).

I was chatting with what the general consensus around here says are the four most physically attractive women in the office.

Walked back to my desk and realized my trousers fly was down the entire time.

We did get a little (as in 1.0 mm of rain) but that was it. Canberra got 4.0mm, Goulburn got 0.4mm and where we used to live, where one of the large fires is still burning, got 5.4mm.
We're not due anything today and the day before yesterday we had also been forecast rain, we also didn't get anything.
Sunday is the next chance, though it's lucky dip time again because its thunderstorms and only 60% 5-10mm of rain. Monday is at 80% of 10-20mm of rain.

So I'm not holding out much hope tbh.

And we're back on the everything closed up, cracks in window frames filled with J-Cloths and doors covered over and the winter draught excluders back out on both doors and window frames (I've found that they do an exceptionally good job on single glazed sash windows for excluding draughts and hence smoke, ash and the latest one Nitrogen Dioxide (NO2) which is normally associated with vehicle exhausts in inner cities and the likes). It is turning up in very large quantities in rural areas because ofthe bushfires burning trees (from which fossil fuels are created, eventually).

So another depressing day on the agenda!

The only possible ray of light (and it won't be from the sun) is the plan to make 2 things today: Mango Soup and rice noodles. But the noodles could just as easily end up being chapatti or uthappam or maybe even Khaman Dhokla

TastyReuben said:
I was chatting with what the general consensus around here says are the four most physically attractive women in the office.

Walked back to my desk and realized my trousers fly was down the entire time.

I was at my local bottle store a few years ago, the lady I know asked where I had been, laughing. I didn't know what she meant. She said your top is inside out. Have you just got dressed,lol. I looked and somehow I put it on the wrong way,lol.
How embarrassing.

rascal said:
I was at my local bottle store a few years ago, the lady I know asked where I had been, laughing. I didn't know what she meant. She said your top is inside out. Have you just got dressed,lol. I looked and somehow I put it on the wrong way,lol.
How embarrassing.

Could be a design statement...

Watching Sky news live, rain and hail in Australia, I bet they are happy. Just what they need.