This is apparently a war time pudding, found on here (http://www.recipespastandpresent.org.uk/wartime/?page_id=204) I find old recipes fascinating and love reading them, so have left it as it is.

War-and-Peace Pudding
This pudding was made in Canada during the last war, and since then many people have never bothered with a rich Christmas pudding.

If I make it, I'll add a photo, but it actually sounds quite interesting and I can see myself trying it at some point (with the odd substitution)
C

Its not that bad, to be honest.

It's one of those that can't go wrong, if original.

I am just struck by the name. It sounds like the kind of thing I would like to present to someone I've been in a fight with as a sort of 'peace' offering. Maybe I should research and see if there is anything like a Peace cake or Peace Pudding. The reading also offers quite a bit of information for our carrot library and by extension carrot Challenge Competition.

I remember my mom making this when I was a kid. I never ate it though. I wouldn't even try it back then but I know my mom and dad really enjoyed it. I don't ever recall her making it when I was older though. It has so many different ingredients. I would watch her make it and ask lots of questions but when it came time to eat it, I was nowhere to be found. lol

It sounds interesting. I have a cookbook here that has many old fashioned recipies including a few cakes that are made without butter since butter was rationed during World War II. To be honest, I haven't tried, it but it looks like it would be a fair substitute. I also have made a Civil War Mac and Cheese, which takes parmesan cheese which was what was available during the Civil War. That dish is really quite good.
C 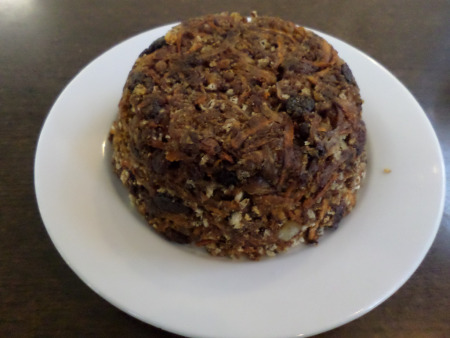