What's going on in your garden?

@SatNavSaysStraightOn, @rascal - one of the funniest/best long weekends I've ever had took place in the Lake District.

We booked a three-day mystery coach tour. On the trip:

1. The driver was a last-minute replacement and had neither driven that particular bus nor ever been to the Lake District.

2. In the middle of summer, he managed to jam the heat on and couldn't figure out how to turn it off.

3. The tour company forgot to include a map for the route (in the days before GPS).

4. It was easy to find the hotel, though...when we pulled into town, it was the one on fire.

5. One wrong turn, then another, then another, and our massive super-modern coach ended up on a...whatever is less than a single-track road - like a tractor path. The driver turned the bus around in a cow field. Just think about that.

6. The holiday-makers finally revolted when he drove past the Beatrix Potter house, announcing that what was supposed to be the highlight of the day was "frightfully busy." A cadre of older women stormed the front of the coach and physically threatened him if he didn't take us back to the house.

Several weeks later, surprise! We got a partial refund from the tour company.

TastyReuben said:
5. One wrong turn, then another, then another, and our massive super-modern coach ended up on a...whatever is less than a single-track road - like a tractor path. The driver turned the bus around in a cow field. Just think about that.
Click to expand...

Yeah, we were well used to that as well. Another one we were used to was towing vehicles off the insides of hairpin bends. There were several of them (8 maybe that I can immediately think of) and 4 or 5 of them were so steep and sharp that you couldn't tarmac the insides of them. Drivers (aka tourists) for some reason thought that you had to stick to your side of the road on a single track road. So when they got to the hairpin bends and it widened because of the need to take the easiest side of the road, they would stick to their side and ground the underneath of even the shortest cars (yes, I towed a mini off the bend) on the tarmac. Only pushing (or towing) the vehicle minus all passengers bar idiot driver would unstick said vehicle. We grew to hate tourist season.

Another trick was to use to use soft green verge to pass on, or better still park your vehicle on. Passing places are also an ideal location for parking up for the day to go hiking...

However, we did sometimes get our own back. Knowing the road inside out, we knew where it was safe to leave tarmac and where it wasn't. Where it was was one of our favourite tricks and that would be not to slow down when passing on the oncoming car and just drive at them until the last minute...

We never now go on holiday during the tourist season. Guess it had a lasting impression on us.

We have had a lot of heavy rain lately and today very strong gusty winds which has resulted in our gorgeous gladdioli plants being battered so my husband came up with a good idea. 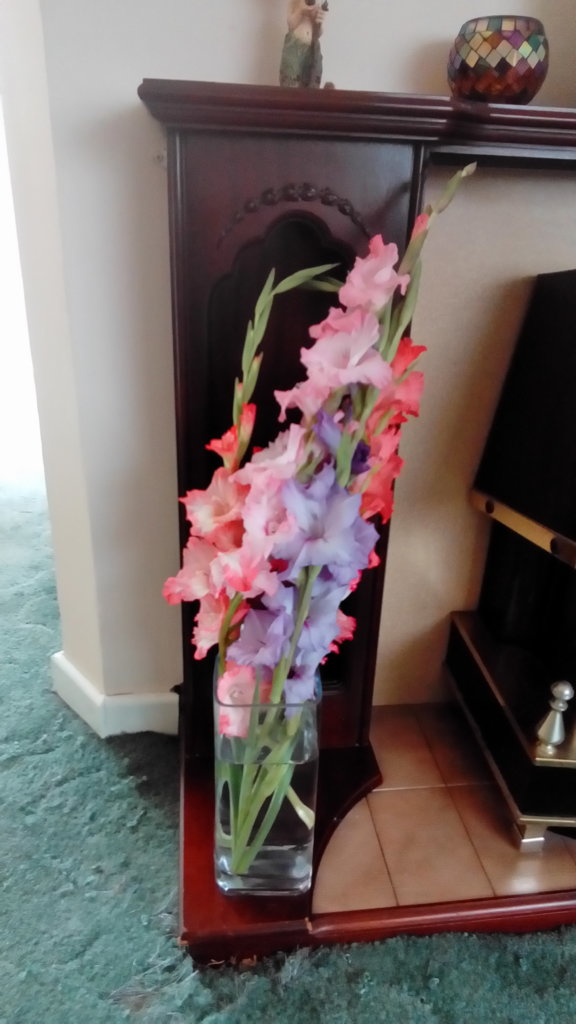 My wife bought a couple of lime trees yesterday. Given her past failures one has to wonder how long they will survive.

Yorky said:
My wife bought a couple of lime trees yesterday. Given her past failures one has to wonder how long they will survive.

Wife ordered another one in the weekend, apparently they are in short demand.?

Planted swede aka turnip seeds out. Radishes ready to plant out. Peas are up. Feels like springs just around the corner. 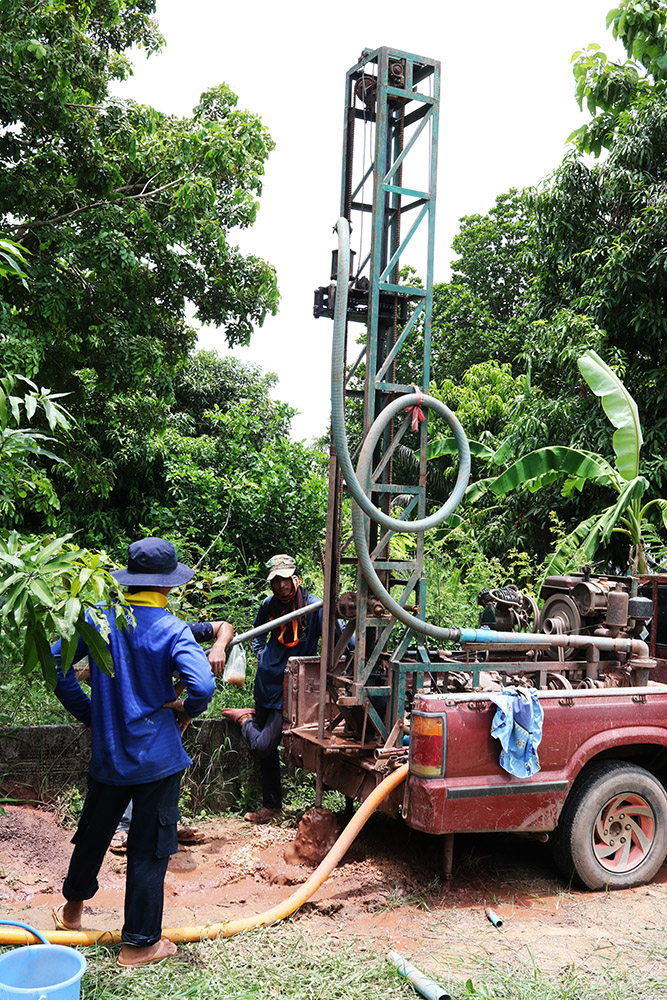 Is it just that the country isn't setup to collect enough water for what you need? The place looks green enough.

Here we are brown and the only green stuff is basically where farmers have ploughed what were previously fields of grass but is now brown roots and in some cases, not even that. They have then sprayed the field with collected water from the dams (which are dangerously low anyway) and because we have had a little rain (by which I mean last month was officially 6mm of rain in this area, though plants gained more from the morning fog and low cloud), these winter crops (which is basically wheat to be grown as vegetation for the sheep to eat directly as it grows) are now showing brilliant green in the fields that have been sown, contrasting starkly with the fields of grass which is dead and overgrazed.

SatNavSaysStraightOn said:
Is it just that the country isn't setup to collect enough water for what you need? The place looks green enough.
Click to expand...

It's not the country as much as our area. The governor is renowned for taking the route of doing nothing and hoping for the best (he retires at the end of this month). About 3 months ago, it was reported in the English speaking press that we could be in dire trouble but it was only 1 month ago that the official Thai language recommendation was released to save water.

SatNavSaysStraightOn said:
Is it just that the country isn't setup to collect enough water for what you need? The place looks green enough.
Click to expand...

The deep rooted stuff appears to be able to find water whatever the conditions. Rice, however, needs to be virtually submerged (and it isn't). Looks like a disastrous crop this year.

The gardener was in today cutting the long grass in the back field. He noticed the 8 lengths of ¾" water pipe and ½" electric conduit. "I'll do that for you", he says. "We have already organised the sparks - how much to dig the trench, today, and install the pipe later after the sparks and backfill the trench?" "฿ 500.00" he says (about £13.00).

It's not worth me getting out of bed! 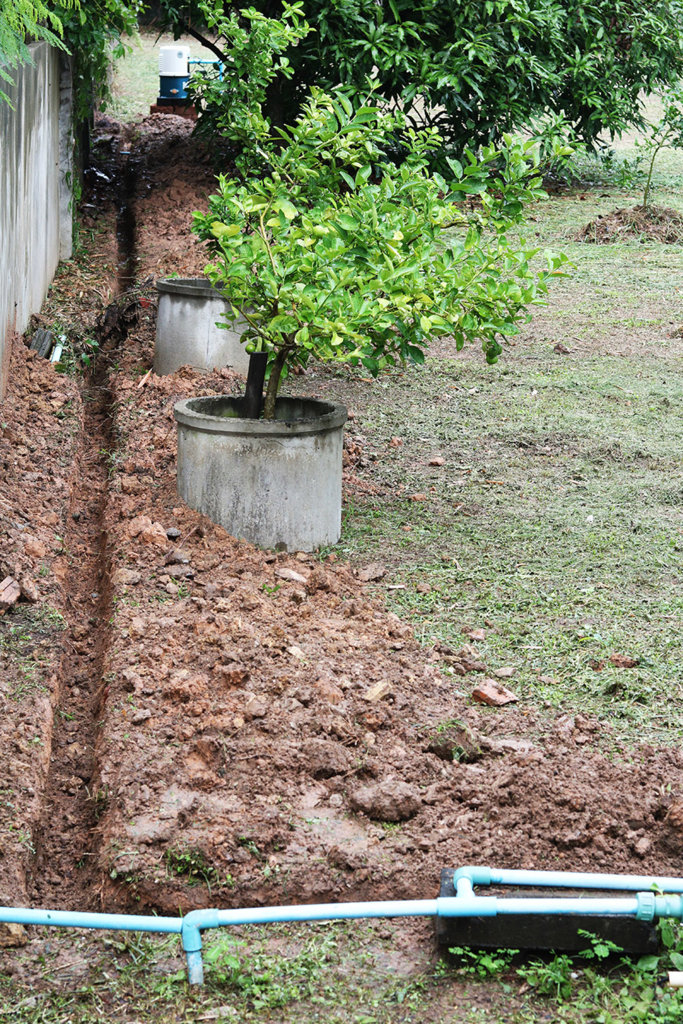 Yesterday was spent on short sleeves in the garden. A distinct contrast to last week's snow.

Much was done with the chickens. On Friday night I established that this week they had run out of feed. I don't know if it is them or something else eating it (magpies or crows are my main culprits) but sadly they are the same size as my smaller chooks which means that I can't just raise the height of the food. I great that the 2 smaller ones may go hungry whilst we're away. So more feeders were installed and a few other bits to try to get the new girls to lay in the nesting boxes and not make nests in the mulch directly below where the perch at night and often during the day as well. In fact one girls will have to be washed tomorrow and them given a blow dry (yes I own a hairdryer but only for my chickens).

Lots of planting was done in the garden. The veg plot was finally covered over completely whilst we're away so that the ground is warm when we get back, and also to stop weeds growing. I managed to get some off the plants planted that I needed to get done, but I've got more to do tomorrow. I've got snowdrop like flowers blooming along side my roses. I also found an apricot tree growing in the lawn. It has come from an apricot stone after my chooks had some apricots last summer. Them or the rosellas... so it's now in a plant pot. Totally fascinating to see it attached to three apricot stone which had split so you could see both the root and stem growing out of it. The vine was also pruned .I didn't freaky want to after the scalping it had last year but it needed it. So did the roses, but some of those prunings have become cuttings. It will deter anything digging and if they root, well I've got new roses... I also finally planted out 2 roses as well.

Veg goes on when I get back. Along with some more pruning of fruit trees.

This little fellow has been hanging around my gas grill the last few times I've gone to use it: 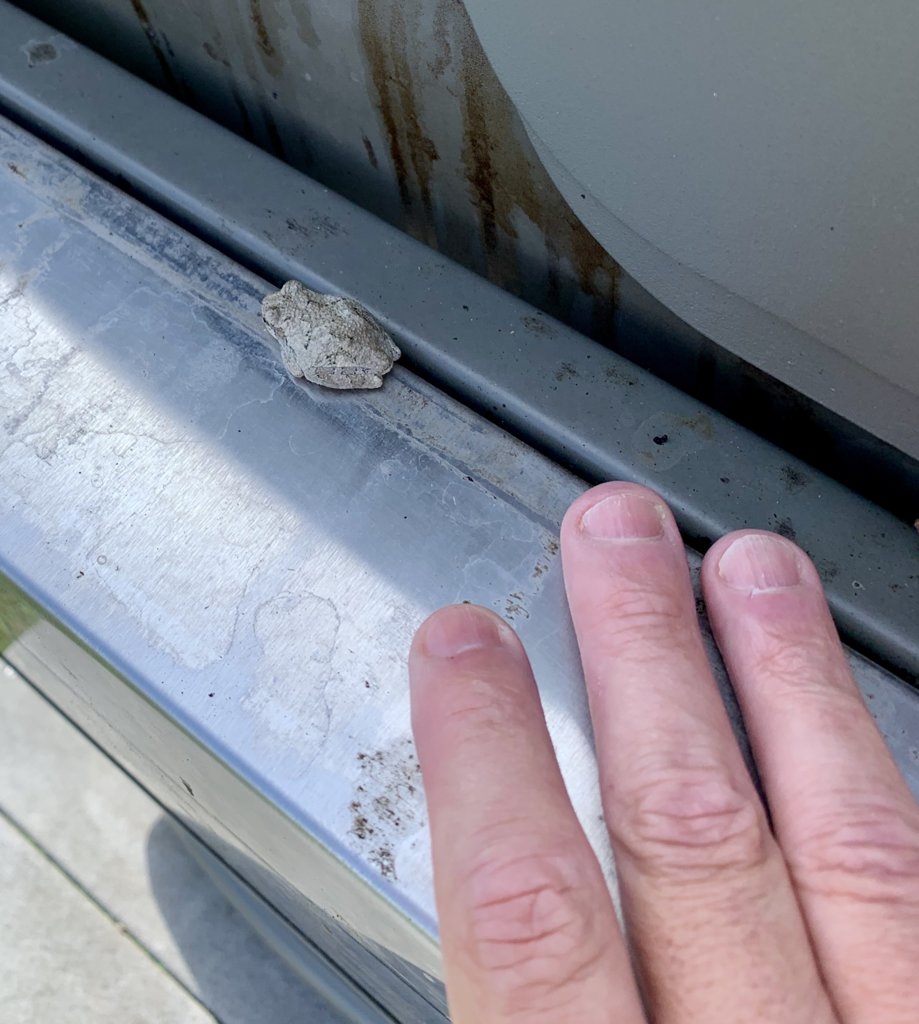 I put my hand in there to show you just how small he is.

I have no idea what that white stuff is on this caterpillar. 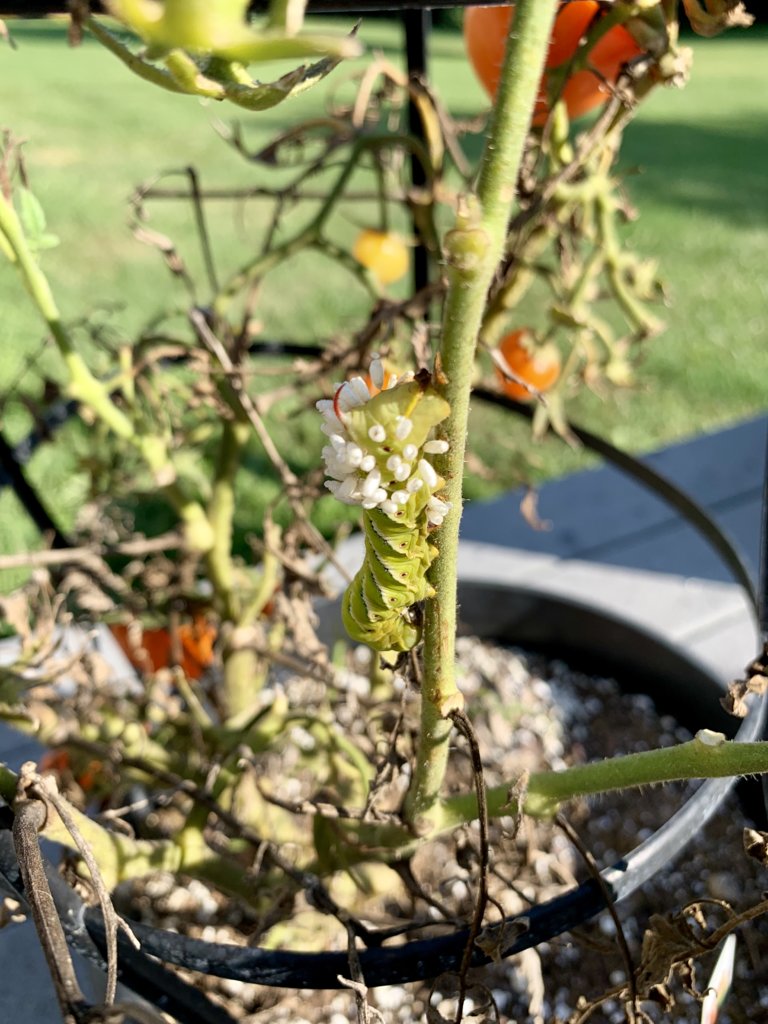 ETA: the internet tells me that's a tomato hornworm, and those white things are wasp larvae, and when they hatch, they'll dispose of the hornworm for me, then go out and find other hornworms to kill.

Isn't Nature cute in how deadly it is?