Are you hooked on big brands?

Prompted by The Late Night Gourmet 's topic on supermarket produce, I started to,wonder about the power of the big brand. Supermarkets are dominated by big brands, who offer huge incentives to the major retailers to allow them to dominate shelf space to crowd out smaller competitors. Just take a look down the soft drinks isle, or the potato chip/crisp section to see what I mean.

Are you hooked on big brand products, snacks, fizzy drinks, jars bottles or cans? Do you ever try to break free from brand loyalty, or could you do without them altogether, even if only for a month? Please share your thoughts.

Not very much, but I want my tomato ketchup to be Heinz. And if I drink a fizzy drink it has to be Coca Cola, not Pepsi. Otherwise I am not very fussed about brands, I prefer shopping from local small bussinesses instead.

I have tried different brands of ketchup and fizzy drinks, but I really do think there's a marked difference on these two things.

Not at all. There are some items that I go big brand with, but only because I haven't yet found an alternative I like, or there isn't a choice.

Kroger is a big supermarket chain in the US that has a some really good store brand products. I really like their Simple Truth branded items. They are all-natural, and sometimes organic items. Their Private Selection store brand is pretty good, too -- most of the time.

COSTCO has their Kirkland branded products that are also pretty consistently good.

I don't drink fizzy soft drinks often, but always go store brand if I buy them at the grocery store. If I grab a drink on the go, I don't usually have a choice.

There is, in my experience, a lot of difference between big brand and supermarket own label, though obviously and especially so in the UK, the quality of the supermarket does make a difference. Taste is everything to us and we'd much rather buy something we like and eat less of it, than buy something that's ok but need extra adding to make it edible.

Both of us used to work on production lines as a student. One of the main ones was in a bonded warehouse bottling alcohol, usually spirits. We could always tell when the cheap stuff was being bottled. The nice stuff always smelled so much better and yes, you could tell the difference.

We don't buy much branded food but back in the UK we would ensure what veg we bought was from Waitrose. It was fresher and nicer, lasted longer and was just generally better.

I had the opportunity by chance to talk to one of the major fruit producers in Herefordshire when I cycled down from Warrington to Swansea and back a few months before my back went and it was interesting taking to them about the quality of their fruit, who got what and in which order the companies supplied the supermarkets. Tescos and Asda were at the bottom of the list. Waitrose at the top. They were happy to sell at to passing people and it was in fact their signs that had lead me to them, free of my husband I was able to stop and follow my nose. The blueberries and cherries were some of the best I have ever had (only the wild blueberries in Finland were better). Everything was freshly picked that day, ready for the lorries which were soon to arrive.

I'll sample anything and then decide on taste. I do have Fooducate loaded on my phone and will sometimes use that to help me decide between two products if I'm curious, and I'll also check ingredients between the shop's brand item and the national item, but when it comes down two it, flavor is the decider.

I buy cheap brands of things like tinned baked beans and 'doctor' them in the kitchen.

I find that quality is usually associated with most brand names. Other than tomatoes, we buy very little canned products, maybe some beans, chipotles in adobo and condensed milk. I'll buy canned tuna if it meets my snobbish requirements. If we buy frozen vegetables, we tent to stick with name brands but sometimes buy store brands.

It depends. Right now after moving I miss my old brand of recycled paper towels. The brand they have up here falls apart under use, and I'd really prefer to use recycled ones over "first/last use ever" sourced paper towels.

I don't drink sodas/fizzy drinks any more (other than home-made seltzer water to which sometimes I add a good squeeze of lemon or lime). When I did drink the stuff, I preferred Coke to Pepsi. I do have preferences for wine or whisky. Although both are also driven by price... as I don't even try something over a given price.

Tomato sauce - doesn't matter - i do prefer to find this in jars rather than tins as I'm not fond of the metallic aftertaste. Also, no added sugars etc.

Over years of experience I do have favorite brands of cream cheese and yogurt. And there are brands of things I avoid at all costs. But for most items, I'm glad to choose the store brand - in most stores, most of those items are pretty good.

Frozen veggies are usually the store brand for me.

I like to experiment with new brands, I'm not necessarily fond of the big ones, even less to those that are constantly advertised on TV. I am curious about niche products or even those without a high-sounding brand name that have the only "defect" of not having enough fame.
I try them, and if I don't like them, end of the story, both for big names and for minor names.
However, there are some products of big brands that I now know well so far and that have my confidence both in terms of quality and in terms of savings.
Pasta, rice and tomato sauce (I know, I'm not very original) are among these and I know I'm going without fail.

What an interesting question

For most ingredients I buy unbranded (or the supermarket's own brand). Eg. herbs and spices I buy in large packets from the "ethinic" aisle rather than buying the ones in Schwartz jars. Eggs and flour I usually buy the stores own brand, same for things like tinned tomatoes or passata.

But for something like coconut milk I'll look carefully at the tin to see what % is actually coconut (the rest is mostly water), and pasta I think is always worth buying a good brand if you want it to taste nice. Then there are products like baked beans and tinned soups which its a case of trial and error to see which brand I prefer, and once identified I tend to stick with it: I much prefer Branston baked beans and Baxters tomato soup to any other brand that I've tried (especially Heinz).

For household things such as kitchen roll, toilet paper, washing powder, etc. we tend to buy Costco's own brand. And veg is either grown ourselves or bought from the market.

I tend to buy herbs and spices from the ethnic aisle too, although I've noticed lately that some of their large packs are getting smaller and smaller - they obviously sell to a price rather than a quantity. Tinned beans, pulses etc are a mixture of KTC, East End, and Sainsbury's. As for frozen food, I usually buy Sainsbury's chicken and sausages for the dog and their peas for both of us. I buy 5 litre bottles of oil and at the moment am breaking my own rules by getting this from Tesco on account of theirs normally being the cheapest. The jury is still out as far as rice is concerned. At the moment Sainsbury's is winning but I have yet to try some of the larger packs from the ethnic aisles. I usually make my own pasta but have a bag or two of Sainsbury's wholemeal or spelt pasta in the cupboard for emergencies. Flour - Sainsbury's plain or self-raising flour is usually good enough for general use, but I do buy Dove Farm or Tesco's organic. For bread making, then it's either Sainsbury's, Dove Farm or Allinson at the moment, although there is a Co-op near me that stocks Marriages flour and I intend to give that a try before long.

Even so, I don't buy big-brands for the sake of it. Some of the big-brand stuff isn't a patch on supermarket budget ranges.

MrsDangermouse said:
herbs and spices I buy in large packets from the "ethinic" aisle rather than buying the ones in Schwartz jars.
Click to expand...

Elawin said:
I tend to buy herbs and spices from the ethnic aisle too,
Click to expand...

Me to - a fraction of the price of Shwartz.

I am surprised that none of the Yurripeans have mentioned ALDI store brands. I have two ALDI stores ten minutes drive from me, and many of my friends rave about their store brands.

caseydog said:
I am surprised that none of the Yurripeans have mentioned ALDI store brands. I have two ALDI stores ten minutes drive from me, and many of my friends rave about their store brands.

I mentioned Aldi in the What Supermarket Produce Do You Use? thread. I have an Aldi at the end of my road - less than 5 minutes walk. Yep - I can just pop out my house and saunter down the road to Aldi! I agree they are very good. In fact I'm currently addicted to their truffle salami which is stunningly good. And its less than £1.50 ($2) per packet. Made in Italy. 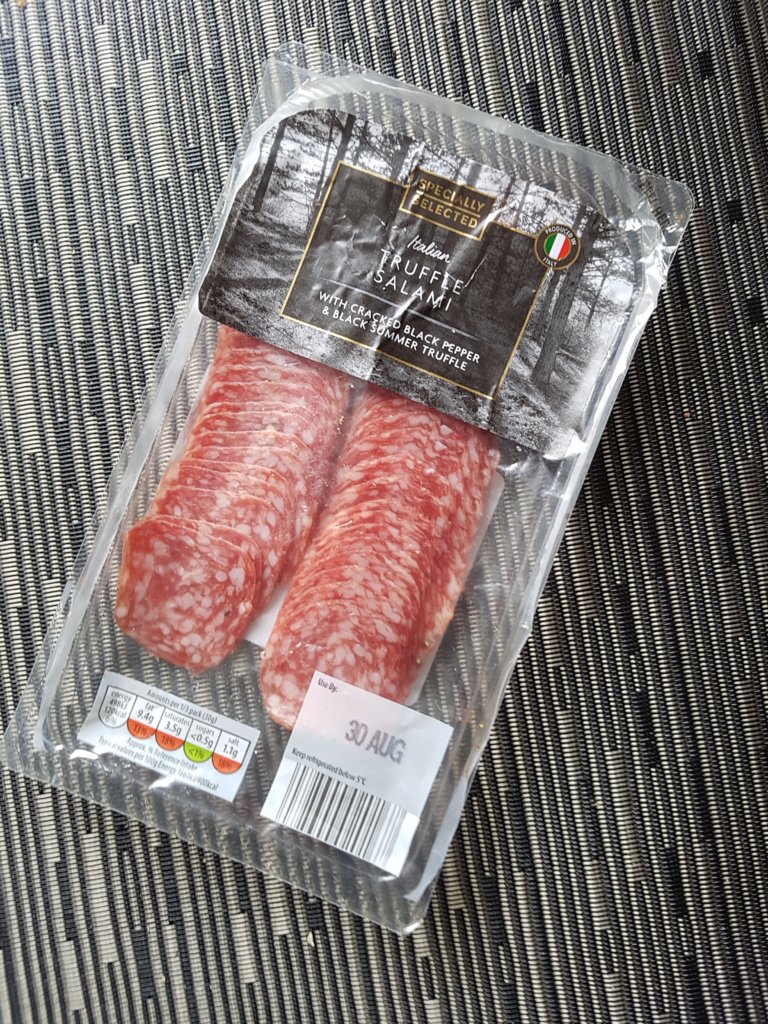 Dishes & Beverages you made from tv shows and/or movies

Do you take notes on your cookbooks?
2