It could be a new source of protein or a new combination for tomatoes and given we have every other combination...
http://www.bbc.co.uk/news/uk-england-birmingham-33018521


A couple making lunch were shocked to find an unwanted addition inside a can of tomatoes - a dead lizard.

Muhammad and Sanam Hussain made the grisly discovery as Mrs Hussain was cooking a curry on Thursday at their home in Alum Rock, Birmingham.

Mrs Hussain, who is seven months pregnant, said the sight of the creature had made her feel ill.

Euro Foods, which distributes the product, said it was investigating how the lizard could have got into the tin.
....
"We are worried about food poisoning. The can was part of a pack of 12. We had already eaten seven of them. Now my wife is off her food.

"I think we have been put off tinned tomatoes for life."
Click to expand...

I have to confess to being more worried if it was alive! Poor thing. Drowning by tomatoes. That has to be a new way to die!

I'd rather eat my placenta...
C

morning glory said:
I'd rather eat my placenta...
Click to expand...

I would have thought the little fella was ready to be eaten ,chemically cooked like a cerviche
Sort of like a more regional version of mini sausages and beans in a tin

Bear Grylls would have eaten it alive. 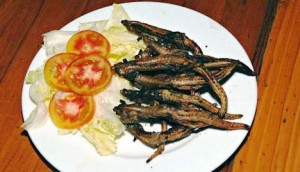 they seem to have missed the tomato out of it!