What is a sandwich?

It is said (but without verification) that the fourth Earl of Sandwich, John Montagu, gave the name to meat placed between two pieces of bread that he could eat without interrupting his gambling.

If this is correct, and I believe it is, then I am of the opinion that whatever style or type of bread is used to envelop a "filling" it is a sandwich. The bread may start as a loaf, a baguette, a cob, a roll, etc., but as soon as it's cut or sliced and contents added then it becomes a sandwich ("Please may I have a beef sandwich in a baguette?")..

What I think we have here is a difference in American and British use of the word. My understanding is that in UK usage, a sandwich is two slices of bread from a loaf with a filling in between. If a roll is used then its called a 'name the filling' roll. So if you go into a cafe and ask for a cheese sandwich you will get slices of bread with cheese in between. If you ask for a cheese roll then you will get a roll. I think in America the word sandwich covers any type of bread.

I suspect the use of the word 'sandwich' in the British sense is changing though, to include other types of bread

Here is the sandwich menu from 'Terry's. A rather famous London Cafe - note the 'doorstep bread': 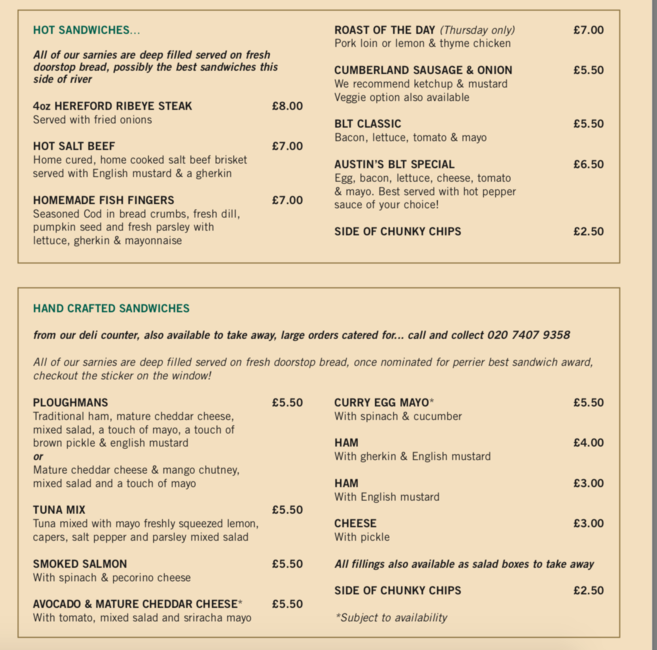 I also noted the "chunky chips" - very avant garde. I don't really consider a "new style" cafe in London to be expert in culinary history.

Yorky said:
I also noted the "chunky chips" - very avant garde. I don't really consider a "new style" cafe in London to be expert in culinary history.
Click to expand...

Its been open since 1982. Its not new style but preserving its old style and hence becoming renowned- although I'm sure they have updated the menu to reflect some new trends.

OK - here is the sandwich menu from one of my local cafes in Maidstone. This cafe is as about near as you will get to the old fashioned British Cafe and I sometimes get an English breakfast there. But of course they have a menu we wouldn't quite recognise from or childhood, including 'mayo' and 'baguettes' which you would not have found in any cafe in those days.


Note the distinction between Sandwich, roll and baguette: 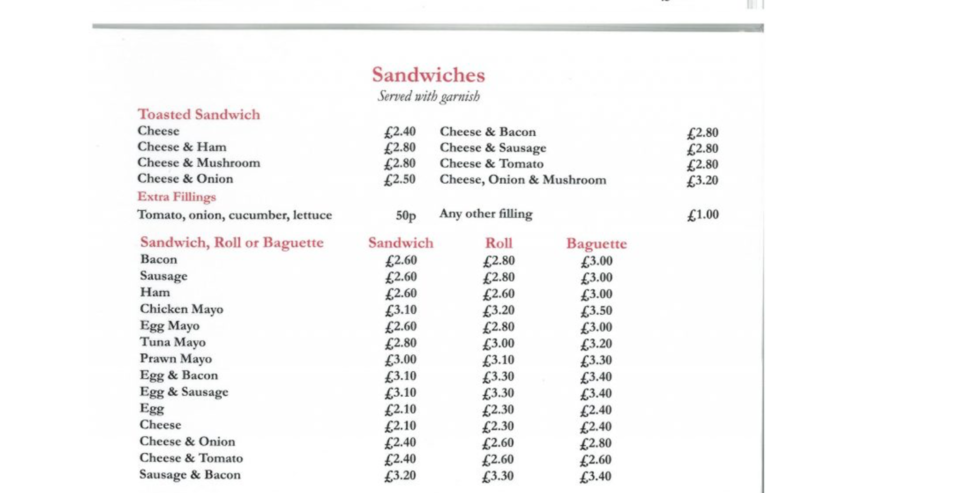 morning glory said:
What I think we have here is a difference in American and British use of the word.
Click to expand...

I think, if you ask different people, you'll get different answers. That's certainly true over here.

Clearly, two slices of bread with something between them is a sandwich. I can't imagine anyone disputing that. But, some people bristle at the notion that a hot dog is a sandwich, because the dog is cradled in the bun. Maybe it's because of the verb form the the word: having something sandwiched between the bread means it has to cover both sides of it.

Some people can't imagine calling a hamburger a sandwich, even though - if a sandwich is something between two pieces of bread - it clearly is.

Is a calzone a sandwich? It's meat and cheese between bread. But, because it's encased in bread, most people wouldn't think of it as a sandwich.

Okay...it's lunch time. As it turns out, I brought a piece of my Moroccan Flatbread, which is onion, parsley, and spices encased in a bread exterior. Sandwich? No, but whatever you call it, it's tasty. 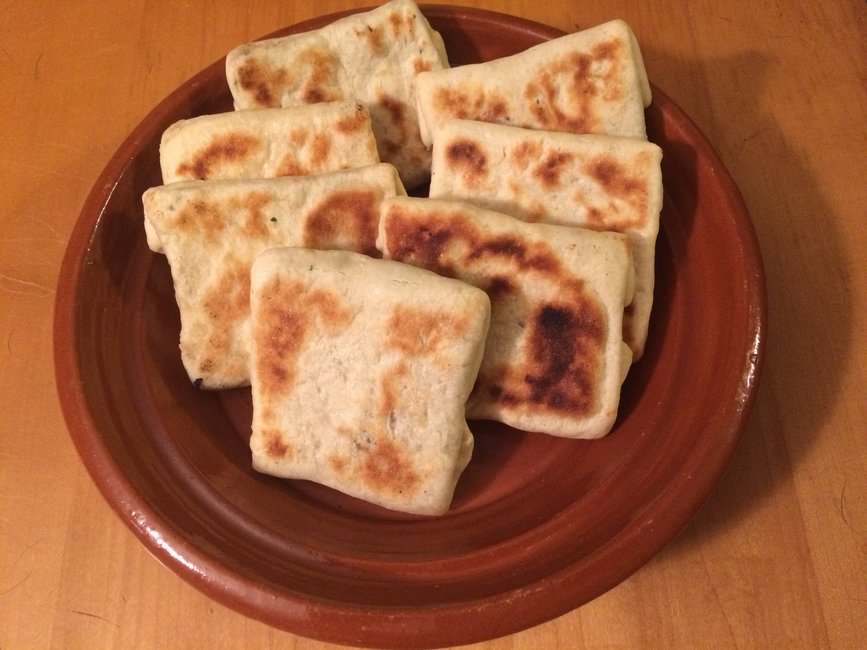 Are Subs (submarine), hoagies, grinders and heros sandwiches? For certain Subs, I don't slice the bread in the conventional way. I make a "v" cut in the top of the loaf and remove quite a bit of the inner bread to allow for more goodies. The removed bread is saved for bread crumbs.

Being as kiwis are from the motherland our is similar to your stuff, sammy or as I call them a sammich, a term I picked up from American friends is 2 slices of bread with a filling as m.g menu describes. Baguettes is just French, Everyman and his dog walk around with them. A doorstep was every day sandwhiches when I grew up, my mum was left handed and couldn't cut bread straight to save herself. We still joke about it today. If you wanted a slice you had to cut on a 30 degree angle. Funny as hell.

Another variable is a hot open sandwich. It's 2 slices of bread, but they are placed down first then topped with hot meats, melted cheeses, sauces and/or gravies.

One of my sandwiches that I had a couple of days ago - it is on a dinner plate, not a titchy side plate. There were actually two eggs in there, and, yes, it is homemade sourdough bread 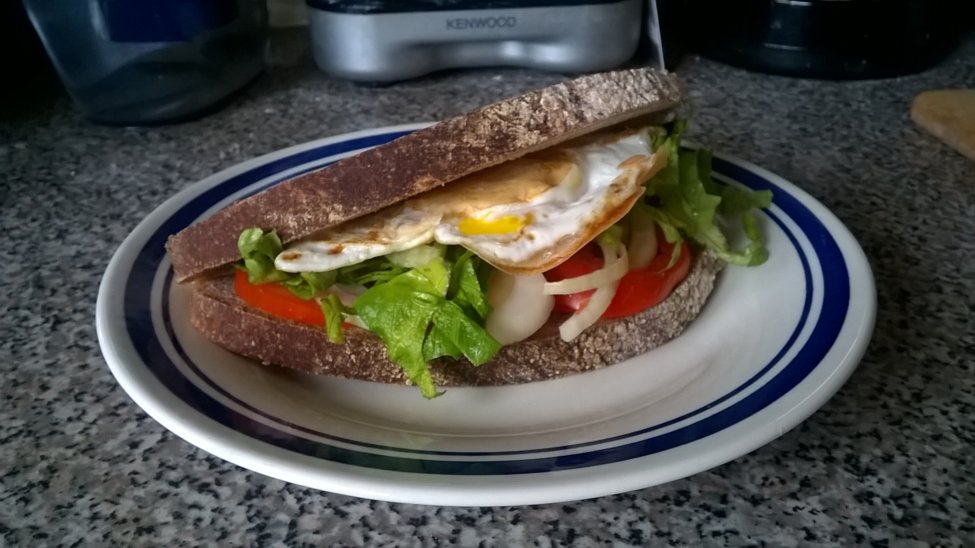 Elawin said:
One of my sandwiches that I had a couple of days ago - it is on a dinner plate, not a titchy side plate. There were actually two eggs in there, and, yes, it is homemade sourdough bread

All of my faves right there. I buy free range large so most of mine are double yolkers.
Russ
Last edited by a moderator: 21 Mar 2018

Elawin said:
One of my sandwiches that I had a couple of days ago - it is on a dinner plate, not a titchy side plate. There were actually two eggs in there, and, yes, it is homemade sourdough bread

rascal said:
All of my faves right there. I buy free range large so most of mine are double yolkers.
Russ
Click to expand...

I've actually ordered some organic eggs from the supermarket this week (my usual supplier was snowed-in), so I'll be able to see if there is any difference. It's a while since I've had any double yolkers.

The loaves I baked Tuesday morning didn't seem to rise so much as "puddled" but the bread it still delicious. It think it may have been because Monday was so cold and it affected the starter/proving. The loaves are so much bigger than those from the bread-maker, I have to cut them in half and freeze what I am not going to use immediately so I don't have to be up all night a couple of times a week. I still make one large or two small loaves using the bread-maker too as I can use that bread immediately if necessary, while the sourdough is better left a day before using.