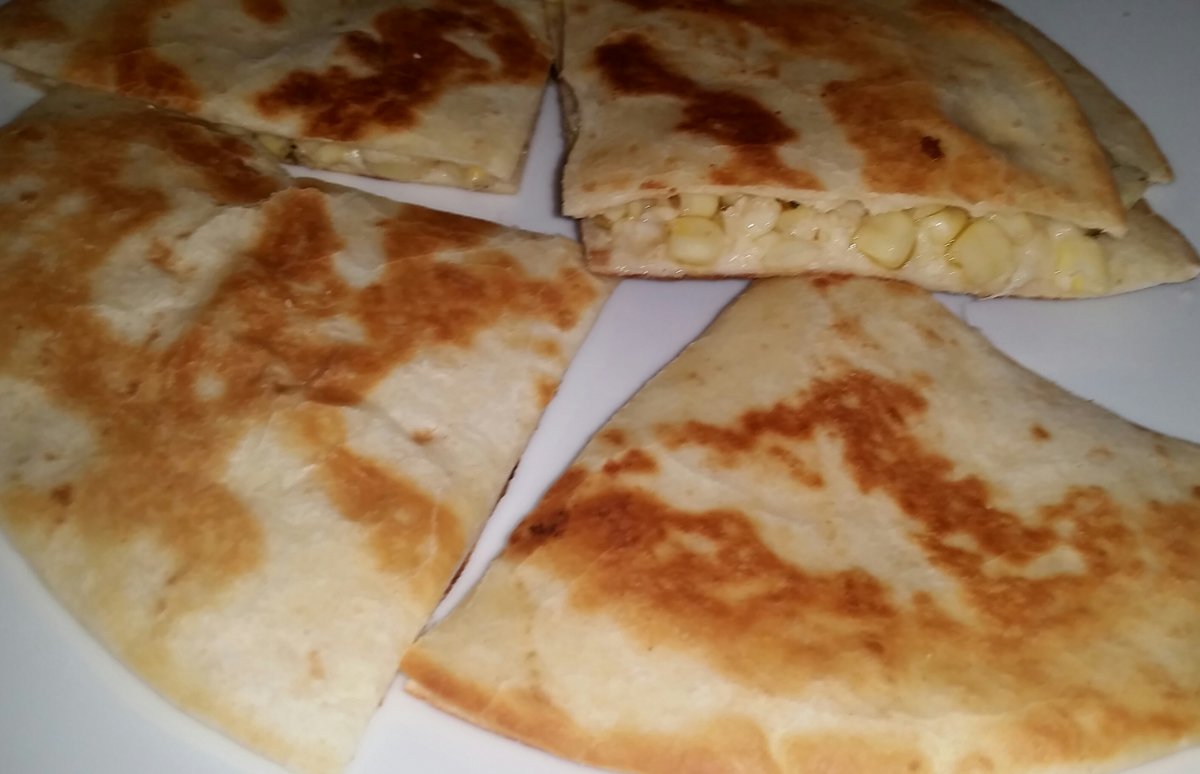 Heat an 8 inch skillet over medium heat. Pour in about 1/2 Tbsp oil, add the corn, oregano, salt and pepper. Cook, stirring frequently, for 4-5 minutes. Remove from heat and place corn mixture into a small bowl and allow to cool.

Wipe out the skillet.

Meanwhile, heat the skillet over medium to medium-high heat. Add 1 Tbsp of oil and swirl to coat. Place 1 of the quesadillas into the skillet, being careful not to spill cheese or corn. Allow to cook until golden brown on the bottom. Using a plate large enough to cover the skillet, flip it over so that the quesadilla is now on the plate. Add another Tablespoon of oil and swirl. Slide the quesadilla back into the skillet and cook until golden brown on the uncooked side. Using a spatula, slide onto a cutting board and let cool while you cook the other quesadilla. Cut the first one and place on a serving dish, then cut the second after it has cooled a couple of minutes. Serve.

These can be served with salsa, guacamole, sour cream, but I like them just plain the best.
Last edited: 19 Jun 2020

I reckon the cheese matters here and although I don't know this American cheese, I believe its a good melter with both sweet and sharp notes.

I dated a girl named Stella Fontinella once. She was also sweet and sharp, but not very meltable, no matter how hard I tried.

Ok, that's a lie, I just like saying "Stella Fontinella."

You can use Fontina and something sharp like pecorino Romano, but I prefer the Stella Fontinella ,and I like saying it too.

TastyReuben said:
I dated a girl named Stella Fontinella once. She was also sweet and sharp, but not very meltable, no matter how hard I tried.

Ok, that's a lie, I just like saying "Stella Fontinella."

That's a cool name though. I went out with a Stella chandler, when I was about 15, when I was about 20 a friend told me she was a hooker then. Went on to open her own parlour. I was friends with her brother. Btw her working name was completely different. And that's not a lie