Ragout.
The term Ragout (Ragù in Italian) is used to identify a full-bodied tomato sauce based on minced meat, cooked for some hours - it takes patience the making of Ragù.
It is widespread throughout the Italian territory, and it's doubtless one of the symbolic foods of the family gathering during the traditional Pranzo della Domenica.

Perhaps not everyone knows that in Italy, there are two cities that compete for the paternity of the Ragù: Bologna and Napoli. Both are Ragù, even if with substantial differences:

The Bolognese Ragù is prepared with mixed vegetable sauté (i.e. Soffritto with onions, carrots, celery), tomato sauce of course, minced meat and basil at the end of cooking (sometimes even during it). Cooking time from 2 to 3 hours.

The Neapolitan Ragù is made with meat pieces (beef or pork ribs/chops, no chicken or turkey), no mixed vegetables sauté, only diced onions, tomato sauce of course, no basil added. Cooking time from 4 hours to 5-6 (sometimes even 8!) 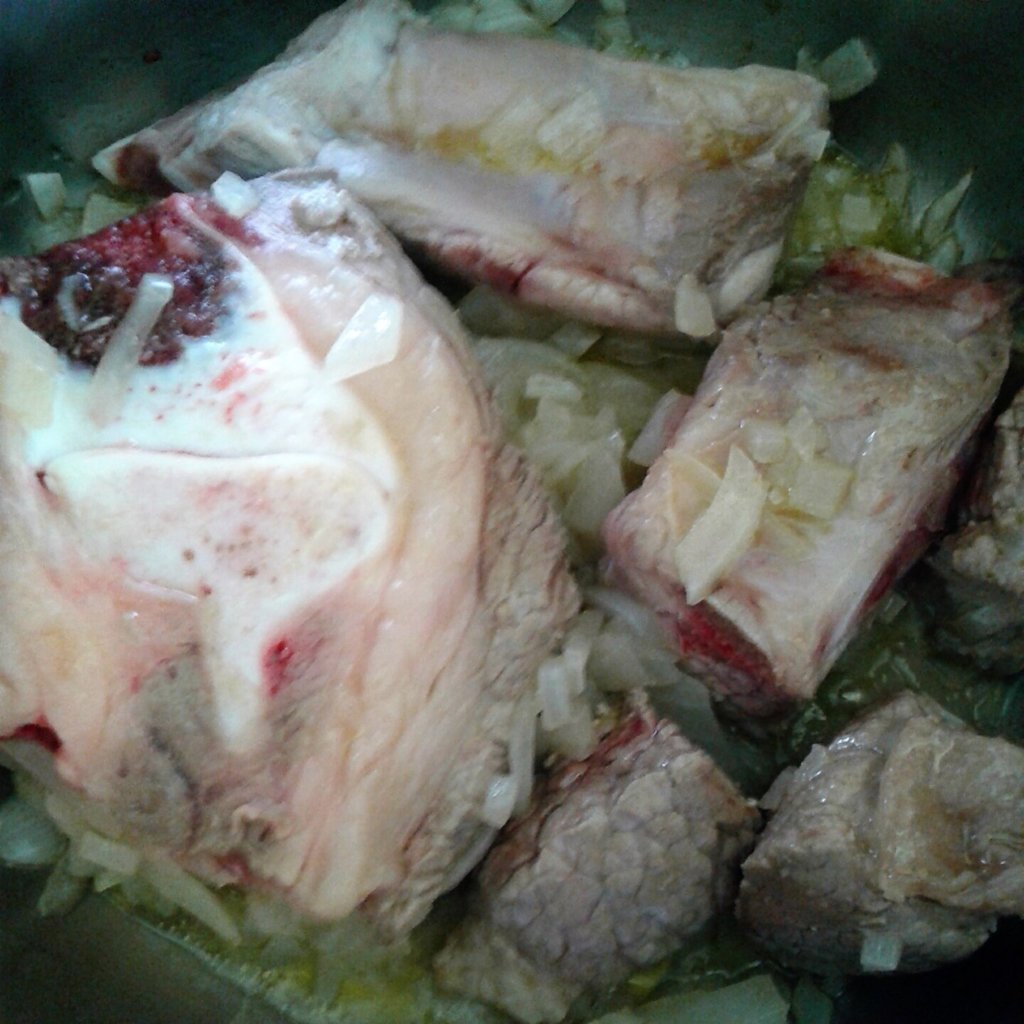 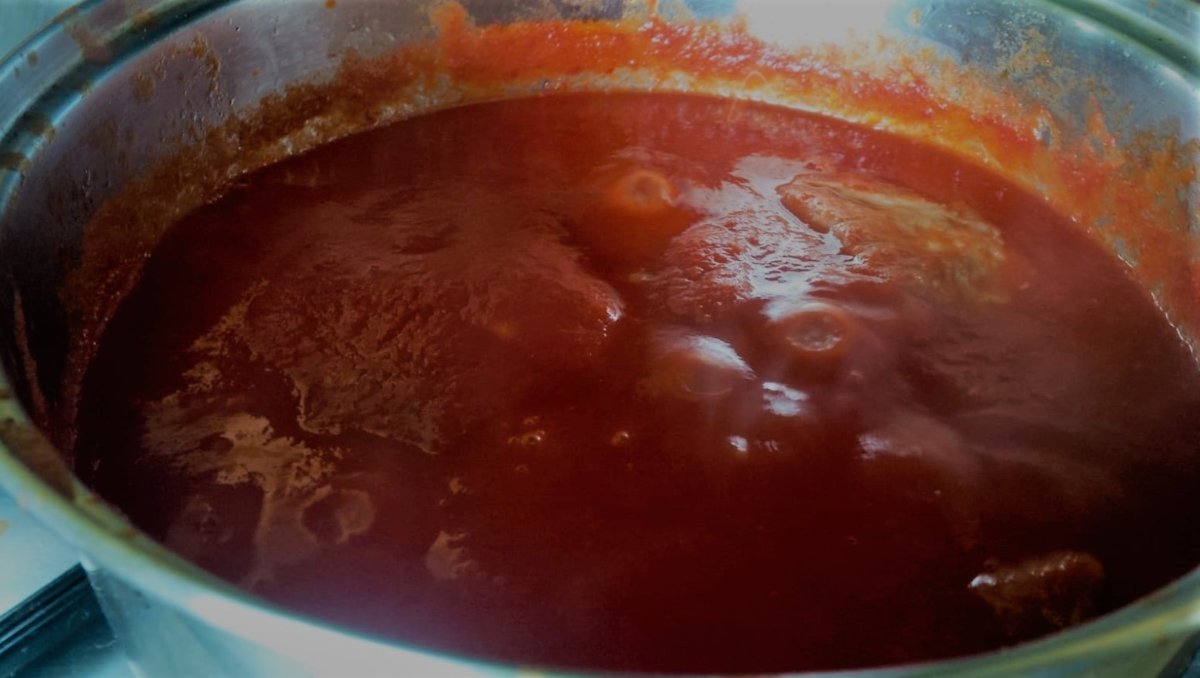 I recently saved the sage plant that was groping on my terrace, so having butter in the fridge, fresh spinach and ricotta, I thought of preparing the Gnudi.
They are ricotta typical of Tuscan cuisine, without filling the pasta to 'cover' it. In fact 'gnudi' means 'nudes'.
Tradition calls for spinach, but can also be done with nettle or swiss chard.
In the past, being still a poor dish, if there were no spinach or beets, they were substituted with wild herbs. 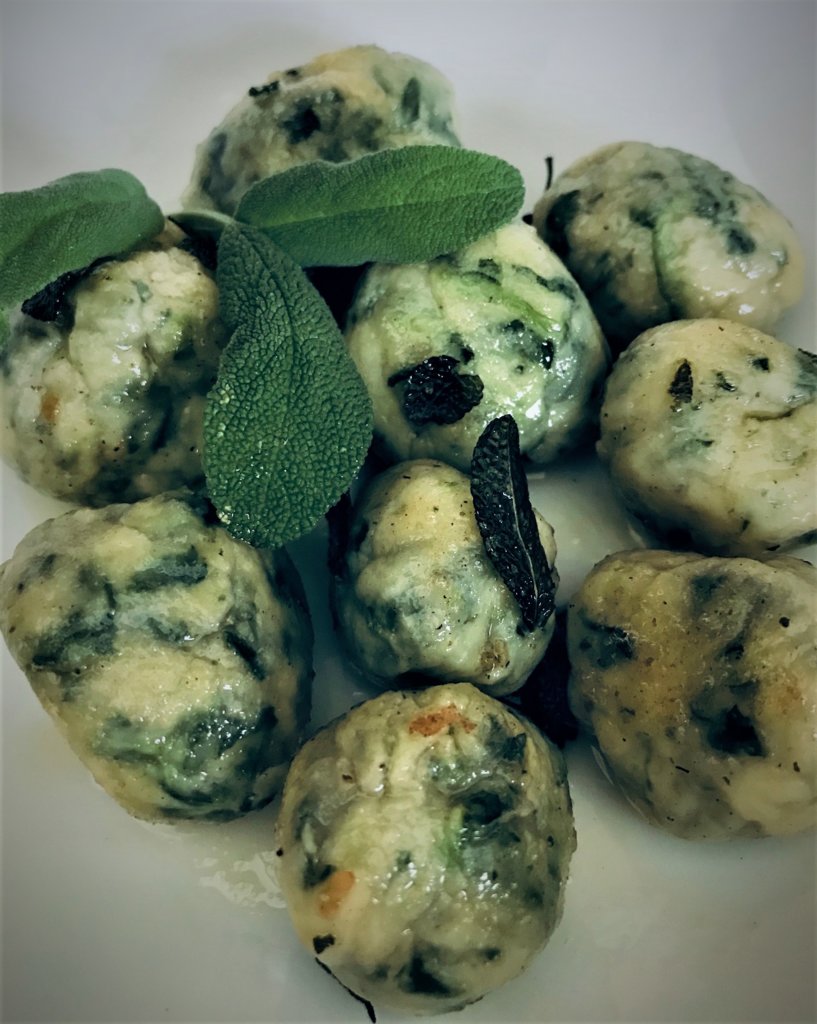 If you "steam" the spinach in the saute pan you are going to use later, you have 1 less pan and the skimmer to clean. As well, the spinach won't have as much water in it, as you'll only be using the water that clings to the leaves after washing and draining the spinach (or just add a couple Tbsp of water to the pan if you are using triple washed spinach out of the bag).

medtran49 said:
If you "steam" the spinach in the saute pan you are going to use later, you have 1 less pan and the skimmer to clean. As well, the spinach won't have as much water in it, as you'll only be using the water that clings to the leaves after washing and draining the spinach (or just add a couple Tbsp of water to the pan if you are using triple washed spinach out of the bag).
Click to expand...

Maybe I missed a point, but I think you use the same number of pans anyway. For the skimmer that needs to be cleaned, it's not so problematic, at least for me. If you don't want to use the skimmer to pull the dumplings up, you can use a fork or whatever is more congenial to you of course
You won't have that much water even if you dry them well - mine didn't have any. After all, everyone has their own method, the important thing is the final result!

Have you cooked gnudi before? Just out of curiosity

Yes I have and whenever I'm using spinach in something like that or in ricotta as a filling for filled pasta or anything similar, I always cook the spinach like that instead of putting it in boiling water. Less water to squeeze out, along with the nutrients spinach contains.

I use both ways to cook spinach. In this specific case cooking these ricotta balls in the water where I blanched the spinach before, I do not lose the nutrients. 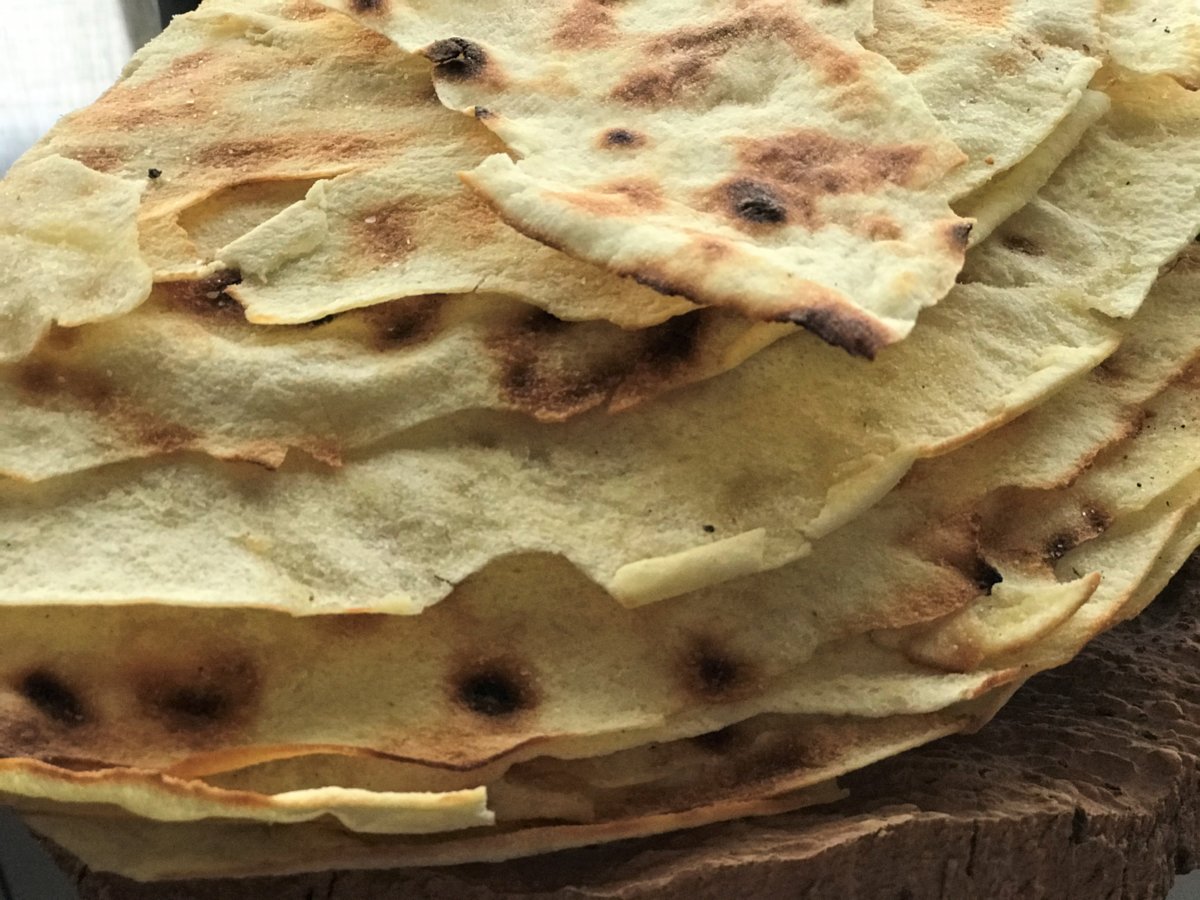 The Carasau bread is a typical product of Sardinia, one of the two big islands of Italy; it originated in the area of Barbagia, in the North-East of the island, and the name Carasau comes from the Sardinian word for ‘to toast’.

The peculiar shape of the Carasau bread was actually very functional for its main consumers, namely the Sardinian shepherds; once cut in half, the sheets of bread had the same semi-circular shape of the shepherd’s bag, which allowed them to transport it easily – and because the Carasau bread is dried, it doesn’t develop mold as easily as normal moist bread.

Even nowadays, most Sardinian families prepare their Carasau bread at home, in wood ovens or normal ovens alike. It can be eaten by itself or used for bruschettas – and even used in lieu of pasta sheets for lasagne! The Zuppa Gallurese is an example of lasagna-like dish prepared with Carasau bread.

Divide the dough into three pieces of roughly the same weight; use a rolling pin to flatten each piece of dough into a thin disc-shaped sheet with a diameter of about 35 cm.

Place each disc onto a cloth and cover them with another kitchen cloth.

Tip: It would be best to use a woolen cloth, but if you don’t have one you can use a cotton cloth, as well.
Click to expand...

Leave the discs to rest for about 2-3 hours. When you’re nearing the end of the resting time, switch on the oven: it needs to preheat to at least 220°C.

Place the first disc on an oven tray and put it in the oven. The dough will start swelling almost immediately. After a few minutes, the whole dough will be swollen like a balloon.

Take the bread out of the oven and use a sharp knife to cut it into two discs, by separating the upper layer of dough from the lower one. Place both sheets on a kitchen cloth, cover them with another kitchen cloth and gently press the discs together.

Repeat until all the discs of dough have been baked and cut: you will have 6 thin sheets of flatbread. These sheets are baked, but still fully pliable; to make your carasau bread crunchy, you need to toast it by placing it agan in the oven.

Put each sheet back in the oven for 1-2 minutes, turning it over about half-way through the cooking time so that both sides toast evenly.

Let your Carasau bread cool down before serving it. Carasau bread is delicious when topped simply by a sprinkle of salt and olive oil, and some fresh rosemary leaves.

Tip: Keep your Carasau bread into an air-tight plastic bag, and it will be good for at least two months
Click to expand... 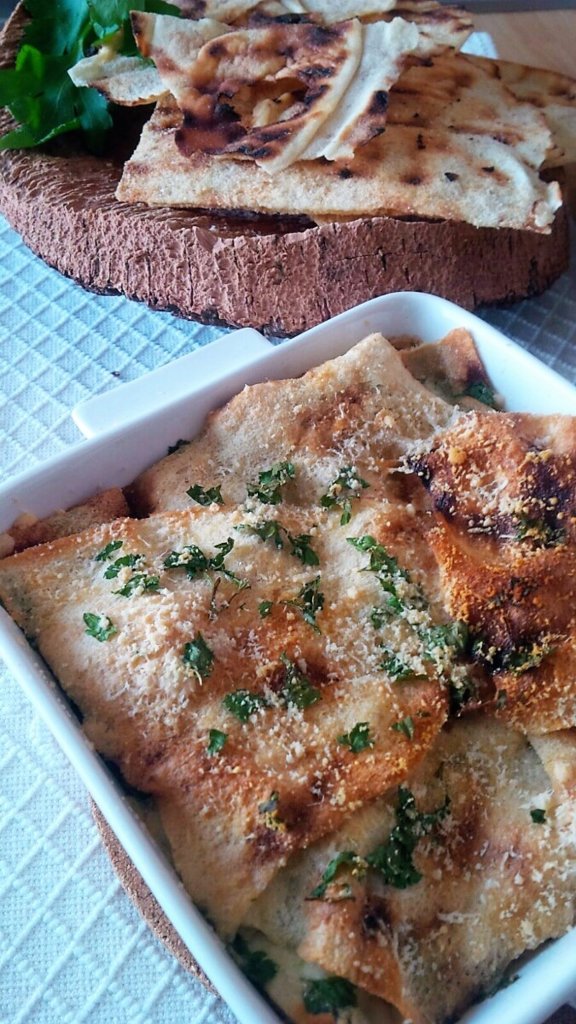 Gallura is an area in the Northeast of Sardinia Island, well-known for La Maddalena Isles and the Costa Smeralda and it’s the area from which this soup takes its name.

Gallurese soup is a soup made with Carasau bread, cheese and meat broth.

Gallurese soup has another main ingredient: broth made by sheep meat, but if you don’t have to hand a sheep, you can use a mixed meat broth ( beef, lamb or chicken as well). Same for Carasau bread, if you can't find it, at most you can use stale bread.

Prepare the broth by using both meat and vegetables together in two liters of water. It will take at least a cuople of hours.

The traditional recipe of the Gallurese soup involves the use of a mixed meat broth, plus carrots, potatoes, celery and onion, to get a broth rich in flavor and nutritious.

Mince the parsley along with the fresh mint, add it in a bowl with grated Pecorino, a pinch of nutmeg, a pinch of salt and mix them.

Meanwhile prepare Carasau bread and assemble it at the bottom of baking pan.

Add the slices of Caciotta cheese to cover Carasau, then add the chopped parsley along with Pecorino and keep making layers like if it was a lasagna making.

You have to get at least 3 layers of Carasau and cheese, and lastly add 4 ladles of broth, by wetting Carasau both above and to the sides, delicately.
On the top of your Carasau layers, put a handful of grated Pecorino which will get a crunchy gratin and bake it for 20 minutes at 180 ° C.

I found out a way to make cannoli without the use of steel cylinders.. 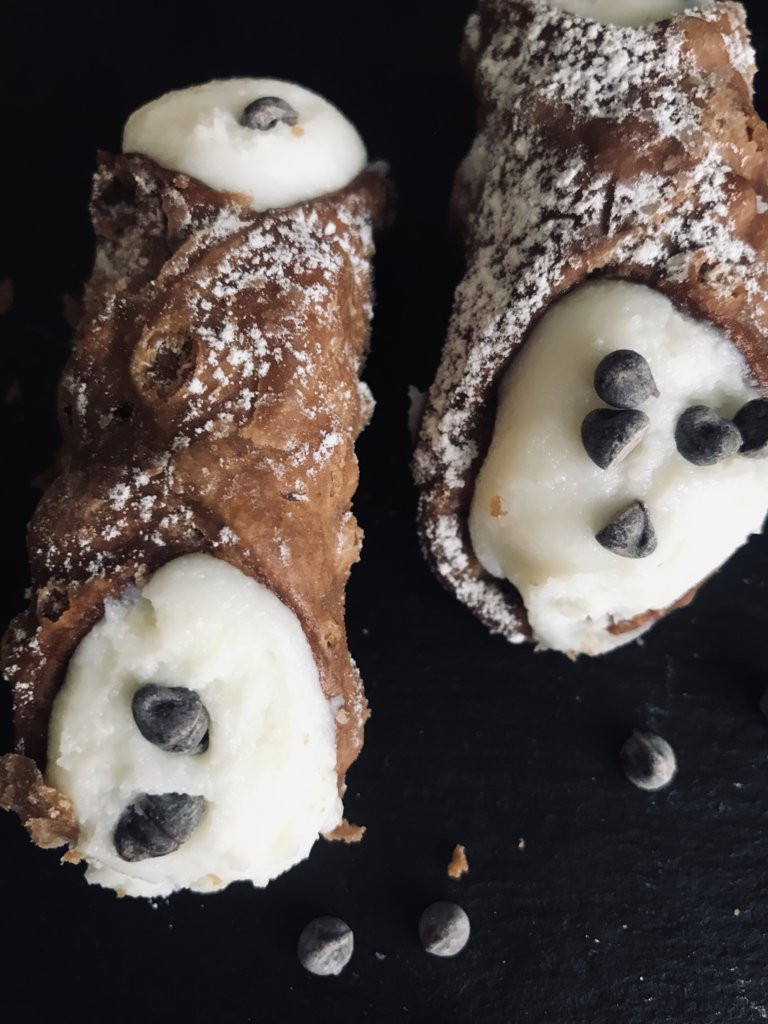 I'm a fan of Nutella, oh yep. Several time ago I tried to make a homemade version that I sometimes keep making still now.
Of course it hasn't the consistency of original Nutella, but I'm happy with it. However, I'm still improving the recipe, but more or less this is the recipe that I make and then eating so far. 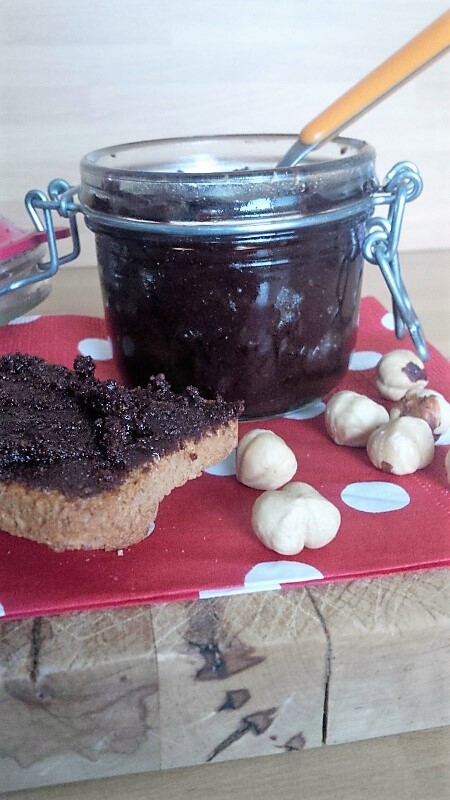 MypinchofItaly said:
I'm a fan of Nutella, oh yep. Several time ago I tried to make a homemade version that I sometimes keep making still now.
Of course it hasn't the consistency of original Nutella, but I'm happy with it. However, I'm still improving the recipe, but more or less this is the recipe that I make and then eating so far.

Melt the chocolate in a saucepan, adding a bit of water.

Use a food processor to blend the nuts in a cream. Make sure to use the food processor only at slow speed, otherwise the oils naturally secreted by the nuts will overheat and the mixture will burn.

The cream will initially be very coarse and with a quite thick consistency; continue to blend the nuts until the cream becomes smoother and less firm, almost liquid. The whole process should take about 5 to 8 minutes.

When the cream has reached the desired consistency, add to it the cocoa powder, the icing sugar, the melted chocolate, the peanut oil and a pinch of salt. Mix again in the food processor, always at a very slow speed and stop only when the cream has become very firm. Leave the cream to rest for at least 10 minutes.

Transfer the cream in a glass jar; your homemade Nutella is ready to be enjoyed! You can try it on a slice of bread or use it to garnish cakes and biscuits.
Click to expand...

Loving your recipes - but may I remind you of site rules - (puts Mod hat on): See rule 19. Recipes must be posted as separate threads. This is good for recognition by search engines and also ensures recipes are fully searchable and have suitable tags. A link the the recipe plus any photos, comments you want to make can be placed in this thread.

morning glory said:
Loving your recipes - but may I remind you of site rules - (puts Mod hat on): See rule 19. Recipes must be posted as separate threads. This is good for recognition by search engines and also ensures recipes are fully searchable and have suitable tags. A link the the recipe plus any photos, comments you want to make can be placed in this thread.
Click to expand...

Oh gosh, sorry. I delete the recipe and write it separately as per the rules, absolutely no problem!

These traditional biscuits from Lazio are a tasty treat – their incredible smell will fill your house!

The area these biscuits originate from is called Castelli Romani (literally: ‘Roman castles’), and it’s a region famous for the quality of the grapes that grow from its rich vulcanic soil. The wines produced in the Castelli Romani are among the best in Italy.

In another area of Lazio, the Ciociaria, these biscuits are prepared by adding anise seeds to the dough. Although traditionally one should use red wine, white wine will also give you good results.

Much like Cantucci Toscani, these biscuits are often enjoyed dipped in a dessert wine like Passito or Vin Santo – but I also love them for breakfast with a glass of milk or as a treat for our afternoon tea. 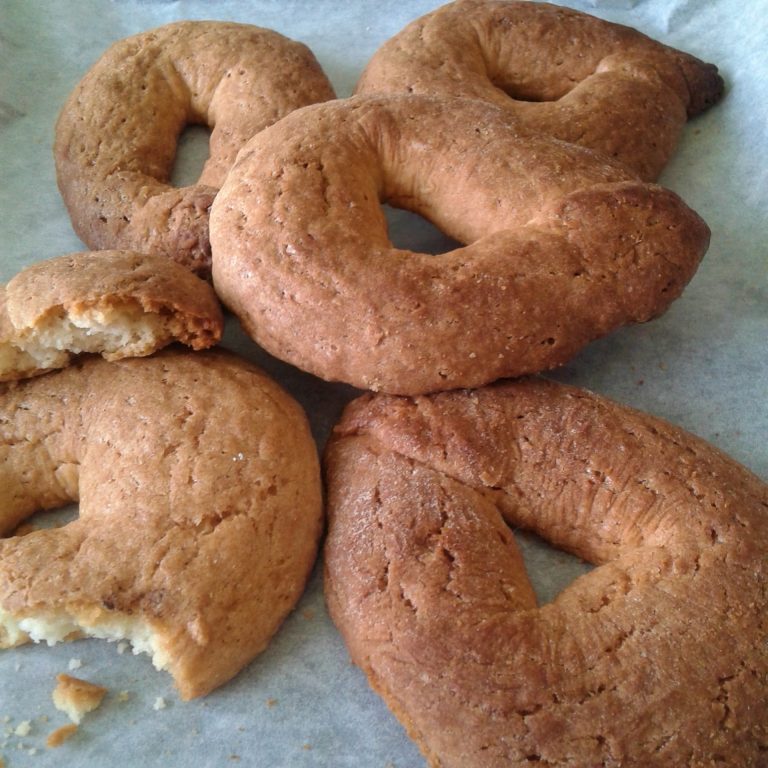