This is a two-part series, and unless you in a northern region of Canada or Maine, the season for you is over this year. BUT - this is something to refer to for NEXT year!

This is a first-year experience for me – I did try on one tree last year but that wasn’t my finest moment of glory, shall we say? It didn’t ooze out much, for sure! This is also apparently a better sap-collecting year by various accounts. And this post is for individual trees collecting via gravity into their own buckets, not for inter-connected lines. For one, two of the trees are at quite a distance from each other, and for the three nestled together, it makes little sense for just three! 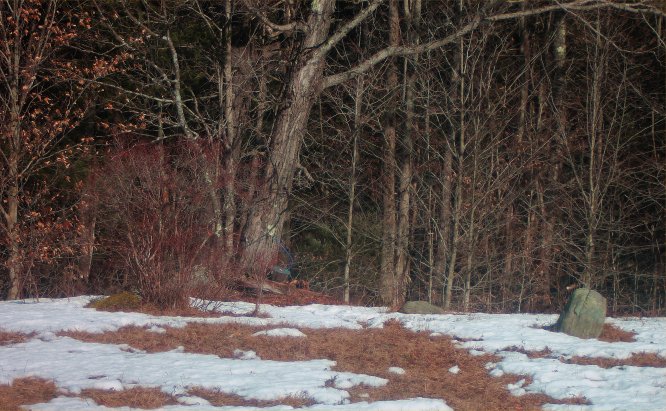 A view of my largest sugar maple that is easily accessible. If you squint, you can see the sap harvesting equipment (blue tubing line). I could have put in a second tap. I am standing in my driveway, facing east. 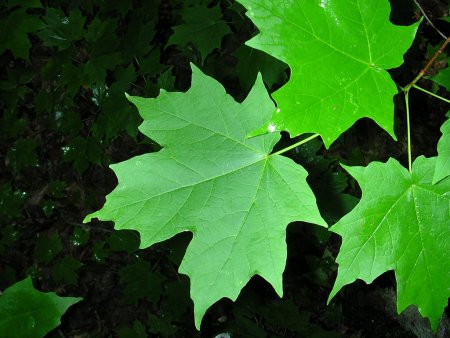 But back to topic – I identify my sugar maples back in October when leaf color changes. The red leaf color will be, ahem, redder than the sugar maples, and leaf shape is somewhat different. Where I need to, I mark them by tying ribbons loosely to the appropriate trees.

2: Time to tap – look at weather forecasts. Some years will be earlier or later than others, depending on your specific locale. Ideally, you want a series of days where it warms above freezing during the day, but sinks below 32 F / 0 C at night. I ended up a few days late, but I am using this as proof-of-principle this year. (Besides, I was having enough knee issues getting back to my chickens (a priority!), much less starting a new path over hard-frozen snowpack, I really decided to wait for things to mush down a bit first. I do wear crampons, but my hiking poles weren’t going to indent into the snow to carry me immediately to my trees this year.)

At any rate, you will find best tapping times between late February into early April, depending on locale and a given year’s weather patterns.

3: Tap. Tap. Tap. As this is an actual first year (and two of my trees that I opted to tap were a fair distance from the rest), I didn’t set up a vacuum line to port a bunch of sap into a central collecting area. TBH, I know nothing about the dynamics of that. This is for first time tappers, who want to learn small, before deciding to grow large. So, each tree gets its own individual bucket.

You will need a set of maple syrup tapping tools. Some suppliers are: Maple Tapper, or Tap My Trees. They come with actual taps (“spiles, in the lingo”), UV-resistant tubing which appears to be about 2.5 feet long (generally a translucent blue), hooks for supporting some types of bucket, instructions, and in the case of the former, both filters and recipes for maple syrup use. 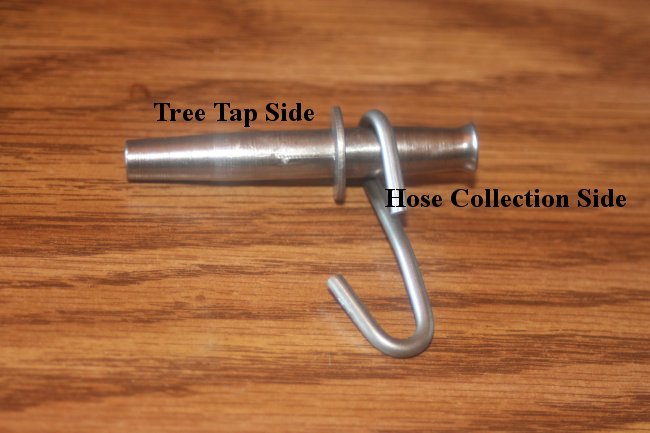 Before you go out, attach each tubing to each of the spiles on the drainage side. TBH, I found this to be an ultimate challenge, even with the hot water recommended to soften the tubing end so it could slip over that “ridge” at the drainage end. I ended up deciding to nick the tubing with a knife so I could accomplish the necessary task. Hey, you do what you gotta do!

Also, have a collection container to hand. Maple sap collection buckets (aluminum) are sold online, or you can use a used gallon water container. For the wider-topped collection buckets, you’ll want either dedicated maple syrup lids (with a hole to permit the sap to enter the bucket) or aluminum foil. I’ve used both. Last thing you want to find is excess debris in your bucket, or worse yet (I’d dump that bucket), a dead mouse that failed to do the backstroke to find its way out. (Haven’t seen that in my maple sap, but I did see it in my rainwater catchment system for my chicken drinking water.) 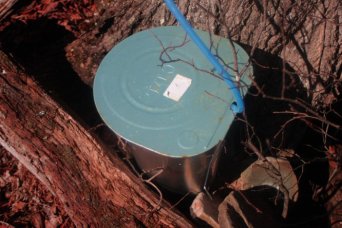 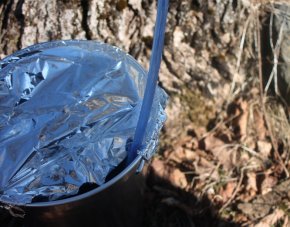 You will also need a cordless drill, to pre-drill. (Most sugar maples are not going to be within range of your electric drill, after alll…) These days most spiles are 5/16th inch, so that’s the drill bit size you need. This combines optimum sap flow with minimal tree damage. You’ll notice that the spiles are about 1.5 inches long on the side that goes into the tree. You don’t want to drill into the heartwood, if you respect your sap-giving tree! On many trees, as in the youngest, you don’t even need to go in that 1.5 inch depth! The “feel” of the wood as you pre-drill will tell you when you can stop.

Drill on the side of a tree that faces either South, Southwest, or West. Drill 2 – 4 feet off the ground, preferably over a root or below a large branch. You want where most of the sun will hit the tree and warm it, hoping that sap will run better here. Drill at a very slight upwards angle – you want gravity to work FOR you. 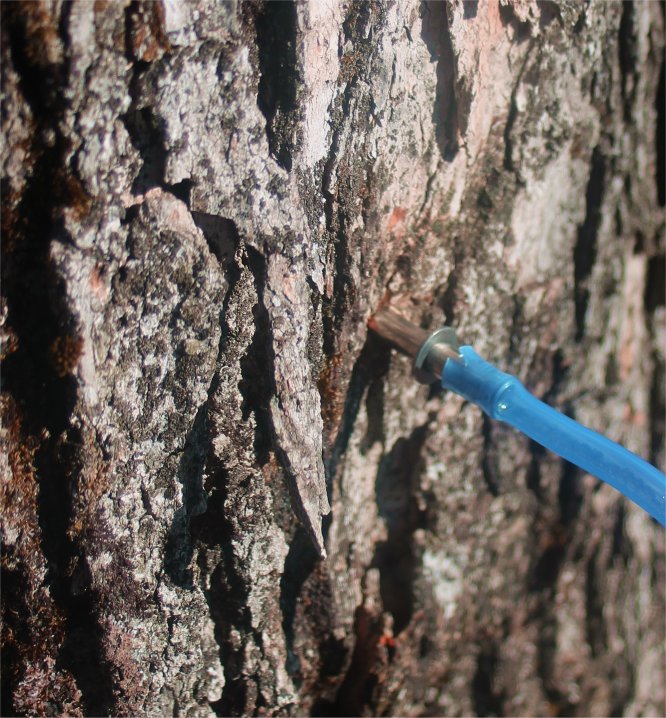 Insertion. Sometimes you really don’t need to drill in an inch and a half. Let your tree tell you.

Insert the spile, and set up the bucket or other clean container, and make sure it is secured either to the tree or onto the ground. I piled up a few rocks around the one. Make sure the tubing runs into the container. Cover as appropriate.

Large trees, over a foot or so in diameter, can have two taps. The tree depicted below could potentially have three. Don’t tap anything less than 10 inches in diameter.

4: Check every few days. At first, every other day – you don’t want the sap to overflow your container, losing you some…. Have some sort of storage vessel available for your maple sap as it reaches close to the top of your container. (You will need to keep this chilled. A fridge? Set into a snow pack out of the sun?)

I was surprised (I should not have been) when I saw a large ice chuck floating on a bucket. Freezing sap is mostly water – you can try to save the outside portions which may have sugar adhering to it, but the frozen parts are pretty much pure water – saves you on some of the boiling time if you get rid of it… or you may need that ice hunk to keep your sap chill, if you don’t have fridge space, and you are not quite ready to start distilling the sap down to final product. 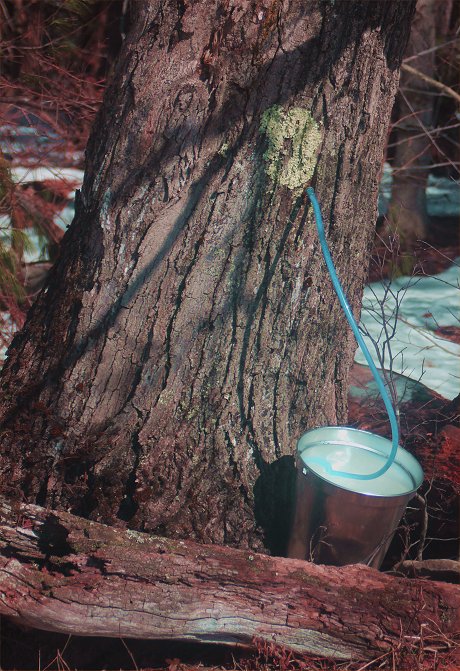 PS, my other trees this year are not depicted. They are further back in the woods – less light and much more awkward to access with a camera around my neck, when you have two bad knees!

Amazing stuff! I have to hand it to you for undertaking this.
You must log in or register to reply here.