I need some recipes for ramekin cake recipes. Specifically a jam upside pudding. (got jam I need to use up)
I don't like making big puddings because it's really only me and the wife eats them and I prefer to cook fresh individual recipes.

In addition, I can't get hold of baking powder, so I was looking into an alternative which is mainly lemon juice mixed with bicarbonate of soda (which I think Americans call baking soda)

Despite googling, I can't find what I'm looking for. I got a few pineapple upside down cake recipes though. It seems I need to reduce the temp and cooking time because smaller cooking containers expose the cake to more heat from the sides and hold the heat longer.

Also Any other ramekin recipes aswell as the jam one would come in handy. I've already made some chicken pot pies.

I have a ramekin recipe here: cranberry-clementine-sponge-pudding.17186 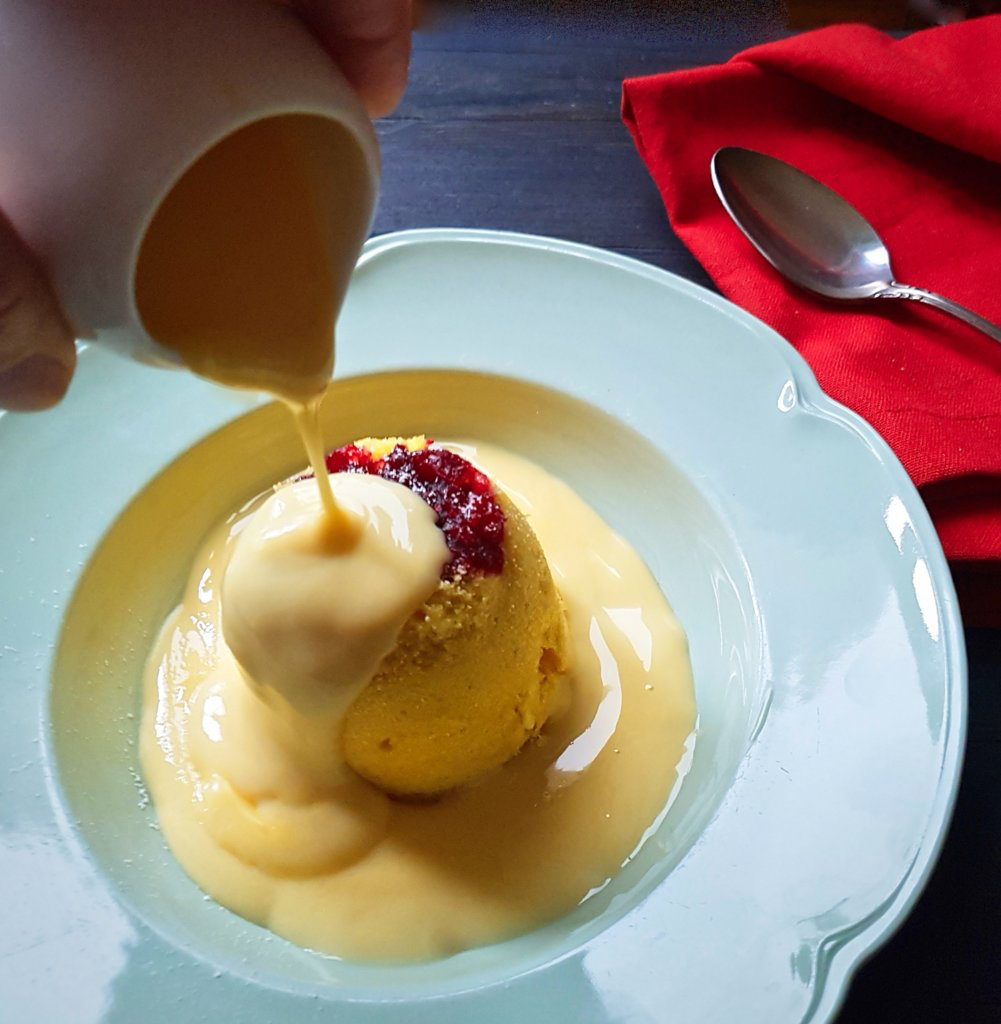 You can substitute any jam for the cranberry/clementine. This is a microwave recipe which I think works really well and is super fast! If you prefer you can steam it.

Yep - you can use bicarbonate of soda if you have it. Or simply use self-raising flour if you have that.
T

Looks exactly what I was looking for. I even had cornflour for my own custard too. I'll probably steam. I'm not a fan of the microwave.

That looks so yummy!!

Tonychantelle said:
Looks exactly what I was looking for. I even had cornflour for my own custard too. I'll probably steam. I'm not a fan of the microwave.

You may be surprised how well this works in a microwave if you try it. Anyway, I hope the recipe turns out OK for you. Please report back if you can! Incidentally, instead of clementine zest you can use lemon or orange zest.

We are a small friendly community here and like to welcome new members to our forum. I hope you stick around! If you want to introduce yourself hop over to New to CookingBites?
T

It's difficult to get certain ingredients where I live. For example, I haven't seen yeast or cooking apples for 2 months.
I think orange zest is basically grated orange peel right?

I'll have a go though.
I don't use the microwave. Basically ive read up on how microwaved water fed to plants destroy them when compared to identical plants in rain water in studies.
Also microwaves destroy nutrients, its probably the most unhealthy form of cooking.
Finally microwave food contains a toxin where the only other form of that toxin is in genetically modified food.


My microwave is mostly for heating up my gel centered water bottle in the winters
Last edited: 16 May 2020

Tonychantelle said:
I don't use the microwave. Basically ive read up on how microwaved water fed to plants destroy them when compared to identical plants in rain water in studies.
Click to expand...

Not heard of this. Do you have a source?

I've read that cooking in the microwave actually preserves more nutrients in vegetables because they aren't leached into boiling water. So the jury is out on that one! The internet abounds with conflicting information, particularly regarding 'healthy' cooking and 'healthy' foods. I tend to only believe properly verified scientific studies.

Yes - but you do need a fine grater to zest and orange. Its the outer skin of the orange not the white part underneath. You can substitute any flavour you like in the recipe - maybe a few drops of vanilla extract if you have it.
Last edited: 16 May 2020

morning glory said:
Yes - but you do need a fine grater to zest and orange. Its the outer skin of the orange not the white part underneath.
Click to expand...

If you're a fair hand, you can deftly use a vegetable peeler, or even a paring knife, and then finely mince the peel - you've just got to watch out for that pith. I've done this in a pinch (as well as using a knife to scrape shavings off of whole nutmegs).
T

I don't know hope to multi quote but in response :

This is (one of the sources) somebody had read extensive studies of microwaved water and decided to try it themselves. In all 3 studies the microwave water plant died first.
But really there were extensive studies proving this is the case, even though "snopes" etc claim it's a myth virtually every private study performed proves it right.
(note in this forum the response was to assume he didn't let the water cool)
But I find it ridiculous to assume anyone with common sense is going to throw boiling water on a plant. If he wanted to do a study, chances are he let it cool.
I don't trust snopes etc. As they aren't unbiased or qualified, and basically "auto debunk" everything.
I prefer to go by regular non shill first hand experience.

As for the nutrients. I have read the same thing (that boiling water leeches nutrients) but microwaves actually disintegrate them far worse than boiling. In fact streaming seems to be the healthier option I know of.
Here's a link which lists harmful effects of microwaved foods
Including its effects on nutrients and creating carginogens.

Source :5 Reasons Why Microwave Oven Cooking Is Harming Your Health