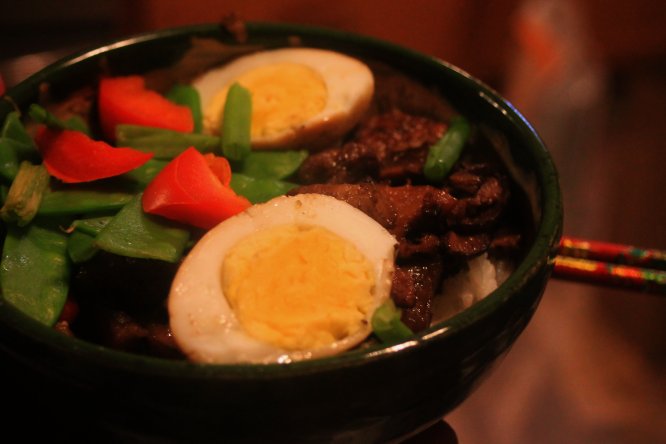 I mention potential substitutions for alcohol in the recipe proper. Soy sauces can also be subbed with coconut aminos to make them legume-free as well as gluten-free. (I find that to be too sweet for me.)

A note about measurements – I provide approximate measurements in this recipe, derived from my recipe source. Please don’t feel you need to measure exactly, but to use these measurements as a guideline. Asian home cooks don’t typically measure – and I suspect Asian restaurants, at least in their native countries, seldom do, either. I would measure for baked goods, at least until I got a feel for the feel of specific dough, however. Otherwise eyeballing will be fine. Asian cooking tends to be observational (tactile and visual).

The pork belly: I understand this is best with skin-on. That which was in my freezer actually had some skin. BUT: It’s still Lu Rou Fan either way.

The shiitake: Use dried shiitake, not fresh. You want to reserve the soaking/rehydrating water for the braising broth.

The shallots: I didn’t have a large shallot but a bunch of small ones. Again, guess you’ll need say, four small shallots for one large one, but once again the definitions of “small” or “large” are variable. Let your tastes lead you here.

Shaoxing wine: Not always easy to find. I have a bottle of “Chinese Cooking Wine”, which has salt added so it can be sold on regular market shelves. Even without the salt, they are not the same thing. According to the recipe, dry sherry can be substituted for Shaoxing wine. PS if you don’t wish alcohol, check the ingredient suggestions below.

NOTE: Standard tablespoons = 20 mL over most of the world, but 15 mL in Australia/New Zealand.

And for the braising:

First, marinate the pork belly strips in the wine and soy sauce, 20-30 minutes.

Meanwhile, heat up a heavy bottomed skillet, add the oil, and when that sizzles with a drop of water, toss in the sliced shallots. After about 5 minutes of frying – shallots should be turning a light golden brown – add the minced garlic. Allow to fry another five minutes (approximately), making sure to fish out anything that might start to burn, lowering heat if necessary.

When they turn a little further golden, remove from pan, draining off excess oil back into the pan. You don’t want them too brown, as they may become bitter. If there is a lot of excess oil, remove and reserve for another dish (flavoring). You only need a bare amount of oil remaining.

Secondly, bring the skillet back up to medium heat, and add the marinated pork. This should stir fry for about five minutes.

Add in the wine/sherry, and deglaze the pan.

Add in the mushroom soaking liquid (omitting the sediment at the bottom, plus a half cup of water.

Bring to a boil, then reduce heat to a low simmer. This next step may take from an hour to an hour and a half, depending on many factors. I covered the dish with a vent area for a little evaporation. Check to see that you don’t simmer to dryness.

During this time, boil the eggs for 10 minutes in previously-boiling water, and run under cold water after cooking in order to peel them. You are supposed to add these to the braising pork for the last 30 minutes of cooking, but I figure if the eggs are cooked during this interlude, they will be hot enough and ready if the pork is cooked at the one-hour mark. I would still put them in the pan to absorb a few flavors for around at least ten minutes.

At any rate, check pork at 1 hour, and test for tenderness, and also for sauce thickening. (Sauce may be thickening too fast – I’d add more water if so. )

When the pork is tender and the sauce is thickened, remove the pot from the heat.

Arrange over the rice, and add the blanched greens and the (optional) pickles. Slice the eggs in half for serving.

Lovely! I think there is a good point in adding the eggs earlier - there is a dish I do which is a bit similar to this. The eggs really absorb the flavour and colour of the sauce so I would add them for 30 minutes.

That looks and sounds delicious. I have never had a dinner dish with hard boiled eggs. I've got this saved to try. Thanks for sharing!
You must log in or register to reply here.