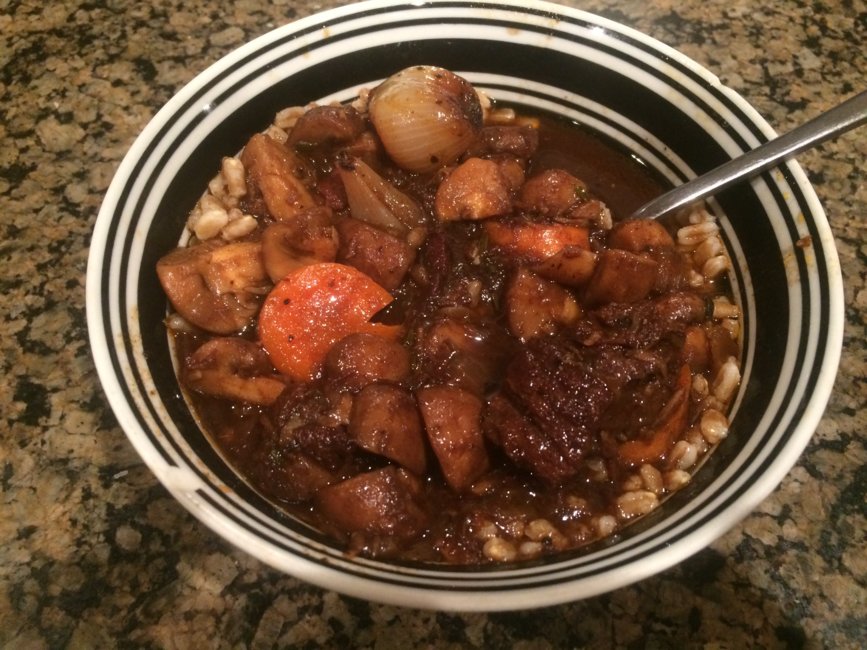 Well now...I broke quite a few conventions in making this. I'm not sure if Julia Child would have approved! I'm happy to say that my ambition - which almost spun out of control more than once in making this - paid off.

I would say that this started with the decision to use my sous vide for the first time (it's been sitting in the box for 2 months), but really it started with my decision to use brisket. I wanted to not just chop it up and throw it into a stew, but rather to make it the way beef brisket is traditionally prepared in barbecues all over the American south: low and slow. This normally means many hours in a smoker. I decided on a compromise, courtesy of a recipe on Food Labs.

But first, I seasoned the brisket with a heavy salt and pepper rub. 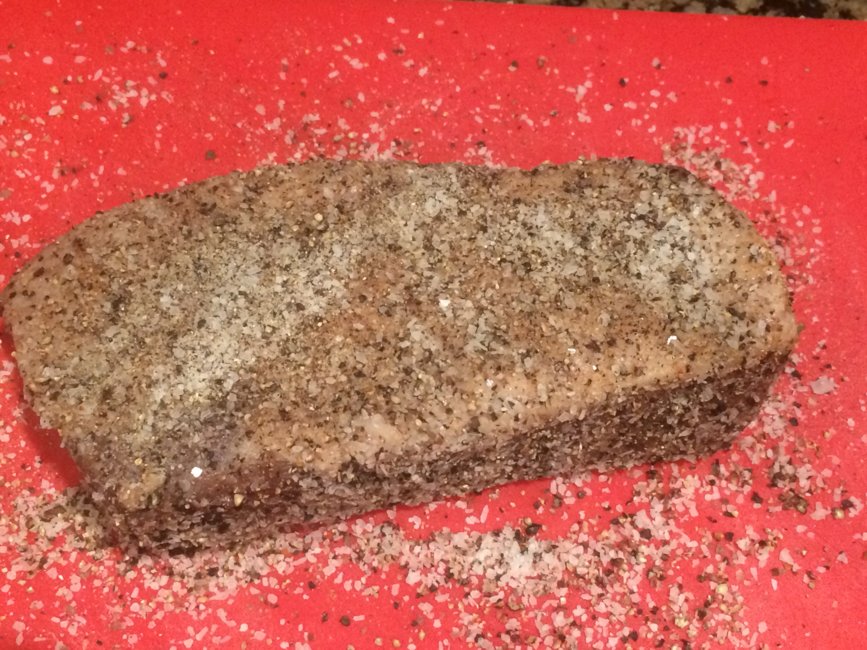 Then, I set up the sous vide machine on a large metal pot. When the temperature reached 155° F, I vacuum sealed the brisket and gave it a bath. Weirdly, the timer seemed to only count time when the temperature - which fluctuated throughout the cook - was 155° F. So, after 24 hours, it had only registered about 14 hours. This taught me to not rely on the device's timer! 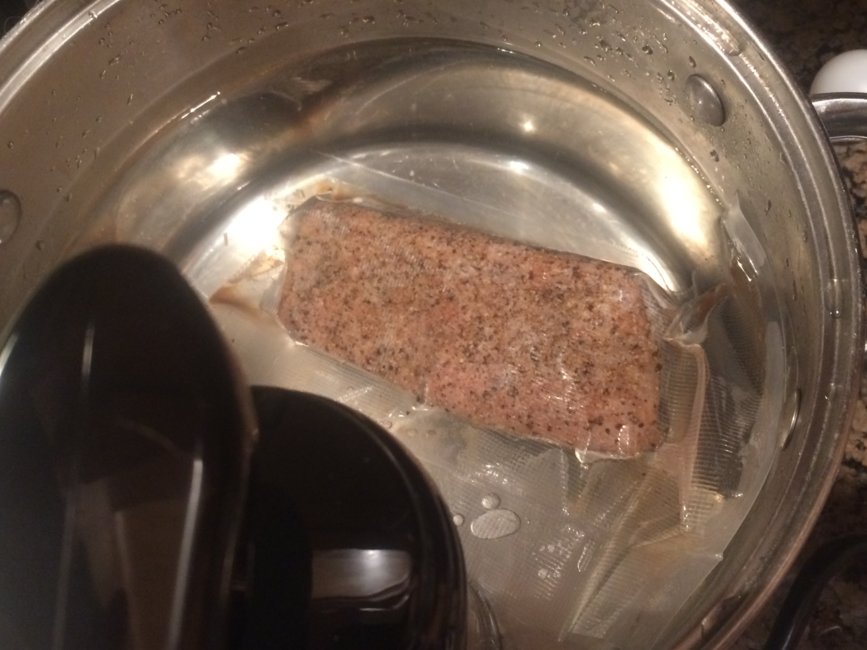 Then, the part that will probably baffle most people: ping-pong balls! These keep the heat in while also holding the food down (as it will tend to float, meaning potentially uneven cooking). 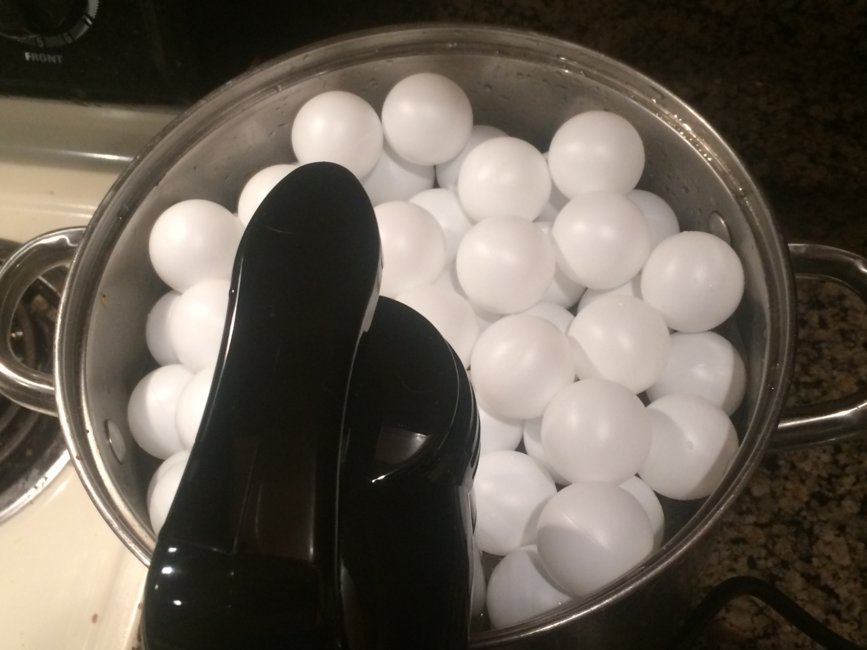 The decision to prepare the beef this way led me to think of other sous vide opportunities for this recipe. I did see some sous vide beef bourguignon recipes, which mostly used the sous vide process to replace the stewing in the oven. Since I was already preparing the brisket for smoking later, this wouldn't have worked for what I wanted to do. So, I decided to sous vide some of the vegetables separately. 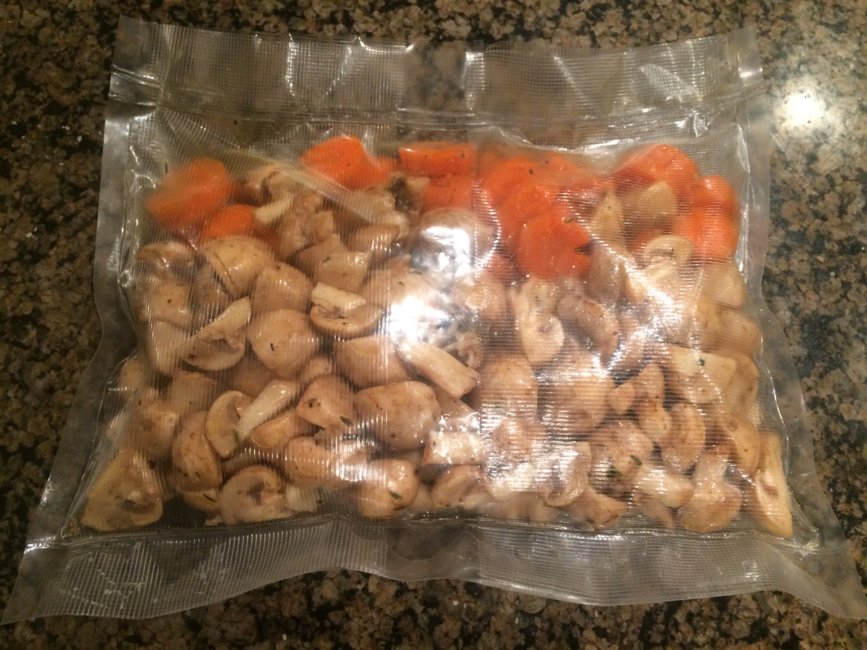 The idea here is that the mushrooms would retain their mushroominess, and carrots their carrotiness, since stewing would result in the flavors blending together. This is an advantage of sous vide: nothing escapes! This is also why the onions were treated separately: intense flavors get more intense with no way to mellow out. 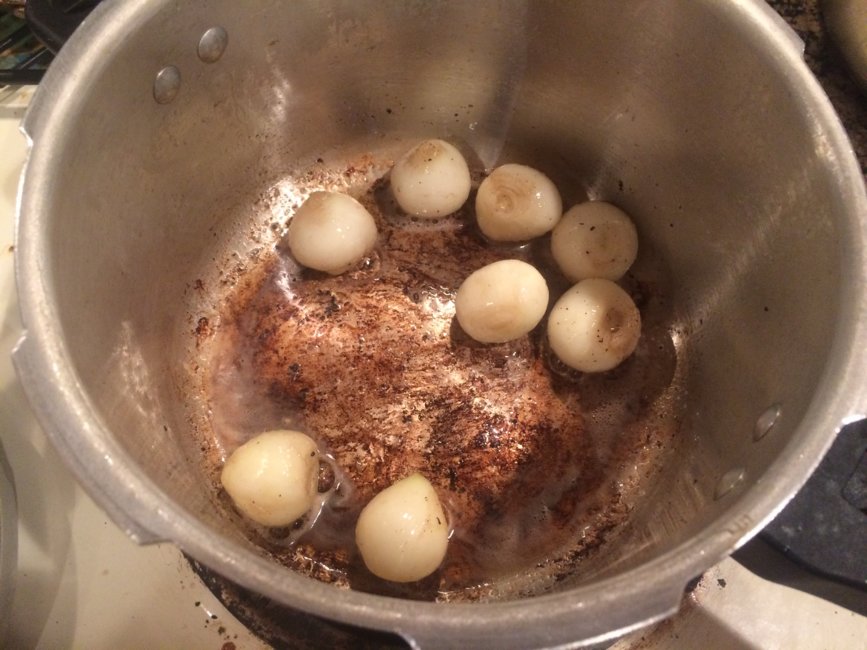 I had previously rendered some bacon in the bottom of this pressure cooker pot. That's right: sous vide and smoking weren't chefy enough for me, so I decided to try pressure cooking. I scooped out the bacon and proceeded to saute the pearl onions in the rendered fat. Then, I added garlic for a bit, added juices from the brisket sous vide bag, and wine, and sealed up the pressure cooker. I considered checking after 5 minutes, but I gave it 10...and had an incinerated mess at the bottom of the pot. I saved what I could (the remaining onions, though pulverized, were delicious), then decided to go with a traditional stove top method where I could actually see what was going on.

Now, back to the brisket. After 24 hours in the sous vide bag, I placed the brisket on my grill, firing up the other side with a "foil boat" of wood chips, and keeping the brisket side off to provide indirect heat. My big embarrassment here is that, yes, I do have a smoker that's also still in the box, and I didn't have time to put it together. But, as you can see, the grill method led to a gorgeous result: 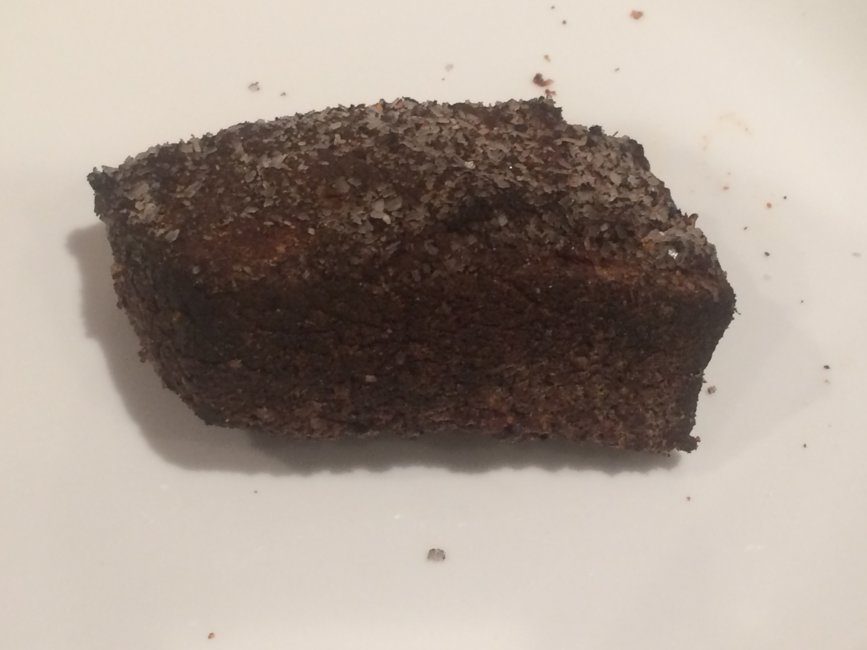 The Food Labs recipe calls for 3 hours on the grill, but that assumes a larger piece of meat. I made just a 1 pound brisket (so I didn't wreck the whole thing if things went wrong), so it cooked much faster. I took it off after 90 minutes, and it was overdone to my liking. I think it would have been good after 60 minutes. Live and learn. The good news is that the crusty "bark" (the exterior) softened up and added a magnificent flavor to the final product.

While the brisket smoked, I dropped the carrots and mushrooms. I added some sherry, olive oil, thyme, salt, and pepper to the bag to make a bit of a marinade. I was skeptical if it would make any difference, considering that it was all going to be mixed together anyway. I'm blown away to report that I was wrong: the mushroom marinade is fantastic, and you get it in every bite. The carrots didn't take to the marinade quite as well, but the carrot flavor is powerful and tasty. 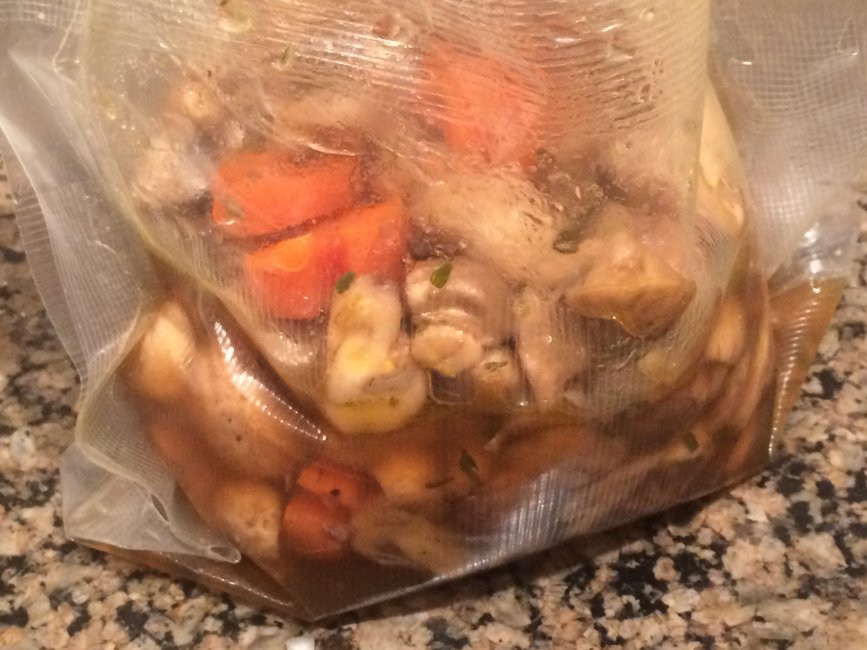 My final plan was to bring it all together - the sous vide vegetables, the smoked brisket, and the other components - but I didn't want all this to sit in the oven for another few hours. So, I reduced the quantity of wine, knowing that it wouldn't have time to cook down fully, and cooked it on the stove top for 20 minutes. 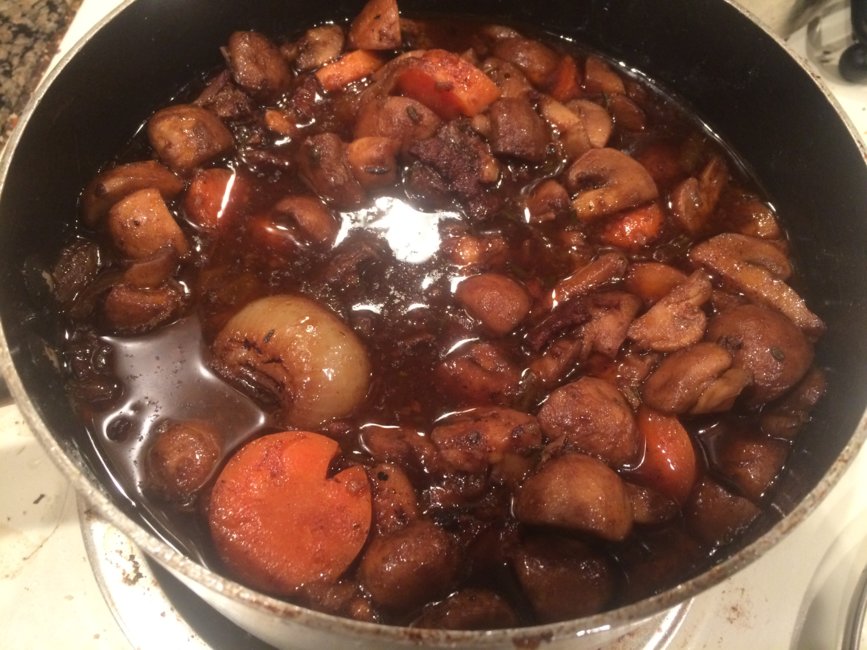 The result was terrific, though I now wish I had cooked down the wine separately some more before bringing everything together.

Because I was able to avoid adding oils, and I skipped the traditional flour, what I ended up with was surprisingly light (about 23 calories an ounce): 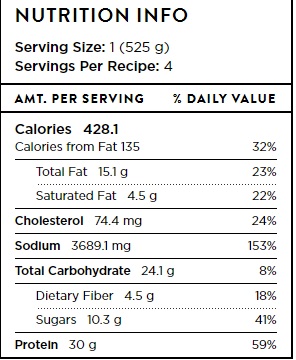 Wow! This is a real 'tour de force'. I feel exhausted just reading it (especially as I have visions of you cooking this late at night)! The result looks fantastic and just as Beef Bourguignon should look. I am wondering how the smoky flavour would work as it is certainly not traditional.

It looks like your sous vide is an immersion type. I am hoping to get a sous vide for my birthday now that prices have come down - but I am getting the 'tank' type. There is one on sale here which is quite compact. I haven't room for it in the kitchen but it struck me that there is no need for it to be in the kitchen as it just needs a power source. So it is going in the cellar!

OI wondered why you didn't marinate the meat in wine first?


The Late Night Gourmet said:
Then, the part that will probably baffle most people: ping-pong balls!
Click to expand...

Did I read this wrong - did you marinate the mushrooms and carrots after cooking in the sous-vide?

My mouth is watering!

morning glory said:
Wow! This is a real 'tour de force'. I feel exhausted just reading it (especially as I have visions of you cooking this late at night)! The result looks fantastic and just as Beef Bourguignon should look. I am wondering how the smoky flavour would work as it is certainly not traditional.
Click to expand...

I hadn't made anything terribly complex in a while, so it was actually exhilarating. My first thought on the taste was that it tasted "wrong" (based on more traditional preparations), but I am really liking the flavor now.

I considered taking a pic of the grill, which was in the dark, so you'd only see the glow of the flames. The other interesting thing was that it had recently rained, and I was very fortunate to be able to keep the flame going. Next time I grill - which will probably also be at night - I'll give a picture a go.

I wondered why you didn't marinate the meat in wine first?
Click to expand...

I decided to do this like a smoked brisket, which meant just a rub of seasoning (salt and pepper). But, next time I think I'll try an overnight marinade, then pat it dry and add the rub later. This sounds like it would work really well.

Did I read this wrong - did you marinate the mushrooms and carrots after cooking in the sous-vide?
Click to expand...

The mushrooms and carrots marinaded in the sous vide bag. I sealed the bag with the marinade inside it, refrigerated it while I did other things, then dropped it in the water to cook later.
Last edited by a moderator: 13 Oct 2017
You must log in or register to reply here.
Share:
Facebook Twitter Reddit Pinterest Tumblr WhatsApp Email Share Link
Top Bottom