caseydog said:
Anything over 20 pounds is a pretty big red snapper. Commercial catch snapper are usually less than 20 pounds. The ones we caught and kept were in the 20-25 pound range.

Offshore fishing is the only fishing I enjoy. When I was a teenager, we would go out for three days on my neighbor's 42-foot fishing boat.

Well you'll be happy to know that I regularly caught red snapper that big only 10 miles off shore. Just about everyone I knew owned a boat or dated someone who owned a boat, so I'd just pony up money for gas and bait and pretty much got to fish whenever I wanted.

I didn't mind surf fishing for pompano in the spring., that was fun and they taste really good.

I used to spearfish at reefs about 4 miles out while scuba diving. Much smaller fish, of course. I'd get dragged trying to spear big fish so didn't even try. I could fill my net bag in 20 minutes.

I have a huge fish production to do today. I had thought to do it yesterday, but my schedule blocked that and I gotta get it done today as the apartment complex will have water shut off for some kind of repairs on Monday. Things are ready to go and I will start around noon today.

The fish used will be red snapper or Pacific rockfish snapper. Either will work.

caseydog said:
I'll have to cook some kind of fried catfish entry to keep with my trend of entering at least one Texican dish in challenges. I figured I'd mention this now, before I buy all the stuff just in time for somebody else to enter the same thing minutes before I cook mine.

Are you ever going to make the catfish? 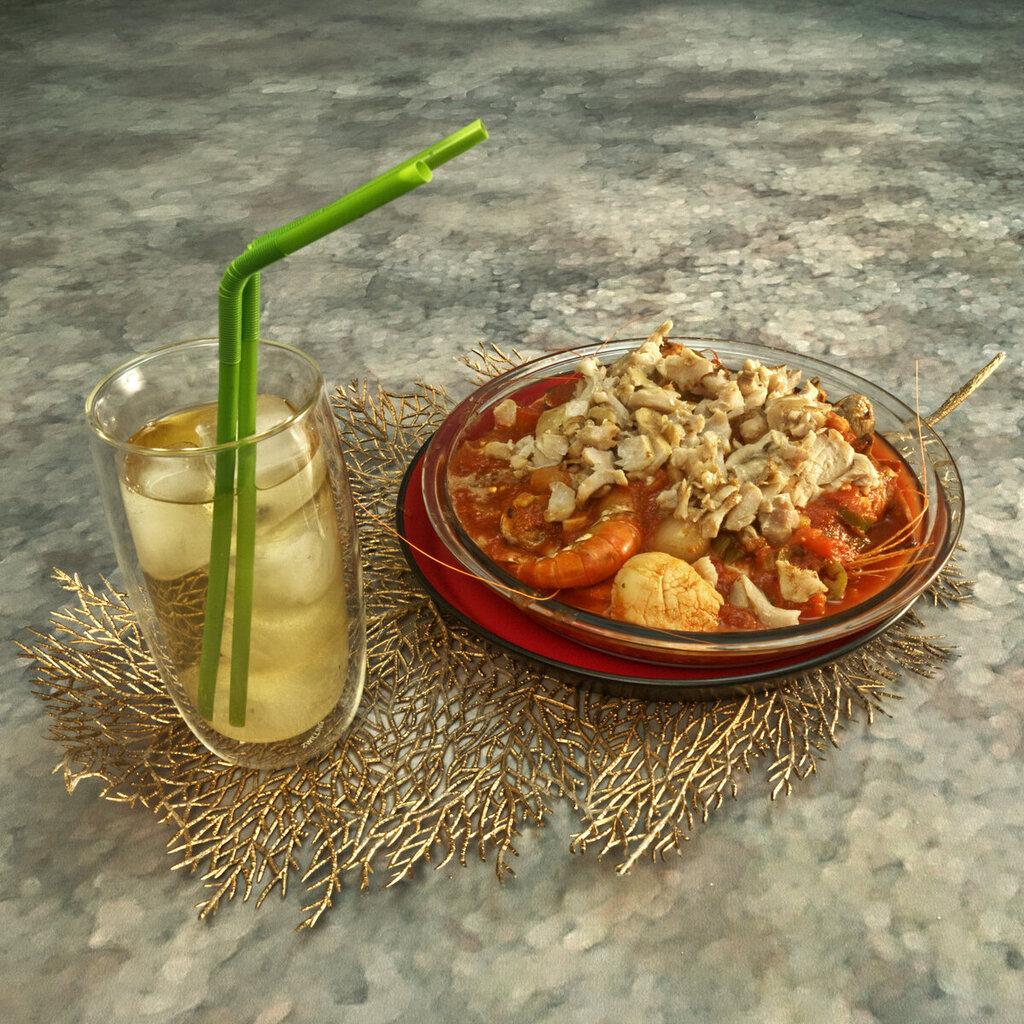 JAS_OH1 said:
Are you ever going to make the catfish?
Click to expand...

Yes, although I already entered a Mexican dish. I need to go to West Frisco to Market street to get some good catfish. Or the Kroger Marketplace might have some. The Kroger nearest to me didn't have any nice catfish.

I only go grocery shopping on weekday afternoon, since too many people refuse to get vaccinated. I stay away from crowds.

I need to make a COSTCO run soon, and they usually have really nice catfish but in large quantities. I guess I could vacuum seal and freeze some.

Here we go, my version of fish tacos! I made my own tortillas and also made a tequila-lime crema for drizzle. I was very pleased with the results, and so was my husband! 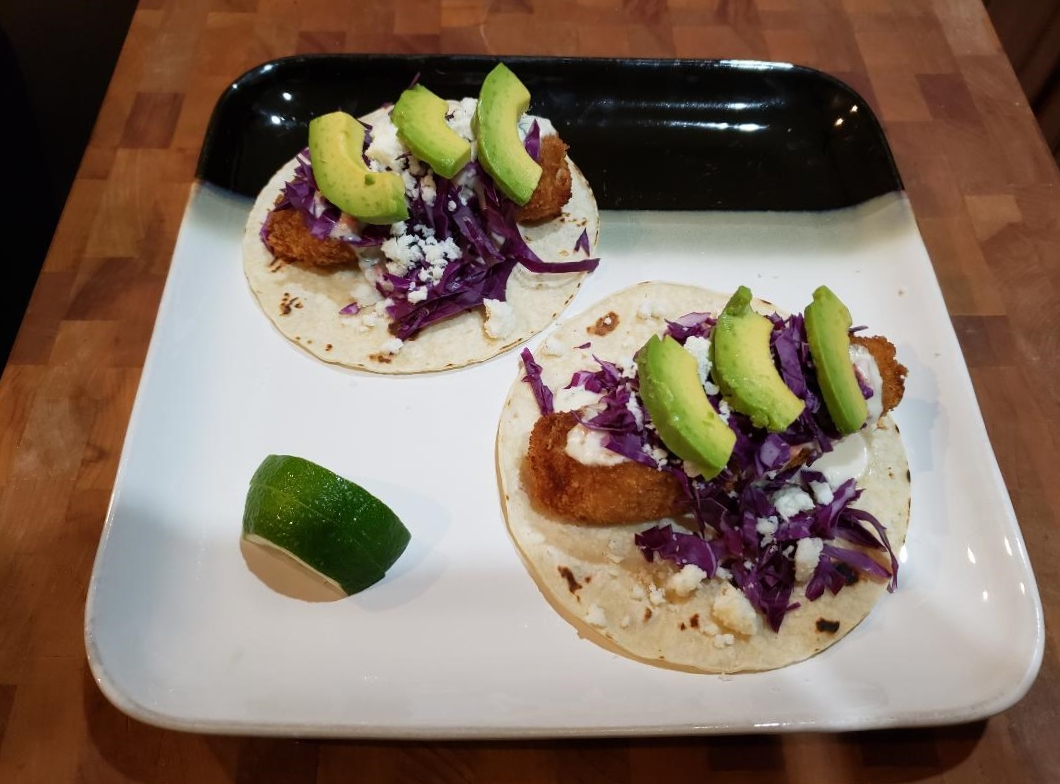 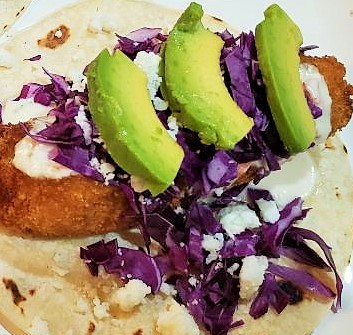 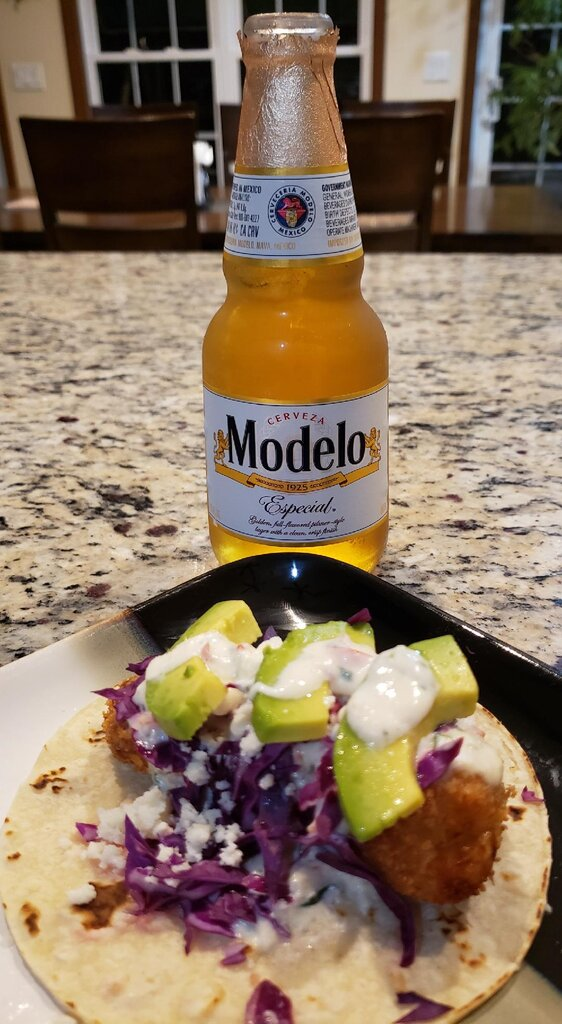 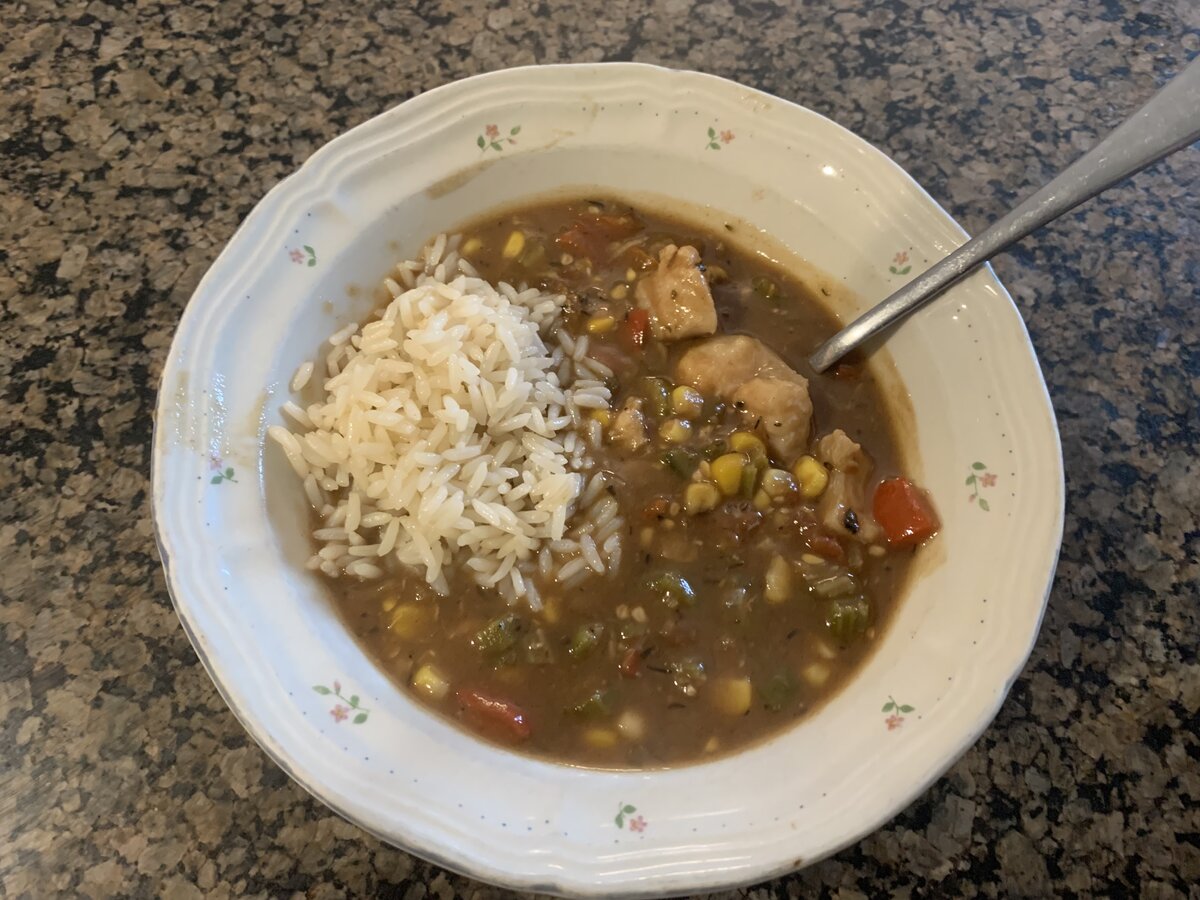 Catfish Gumbo. I can’t imagine anything that sounds more like it belongs on the bayou than catfish gumbo. I have posted gumbo recipes before, but this one is different enough that I believe it should qualify.

Fried catfish is a staple in the American South. It is mostly farm raised, now. It is one fish that is actually better farm raised, as it is a bottom feeder. Farm raised catfish eat better (cleaner) food. These filets came from a farm in Louisiana.

The crust is a mixture of cornmeal and regular flour, so it has a pronounced crunch. Catfish is a mild, flaky white fish. 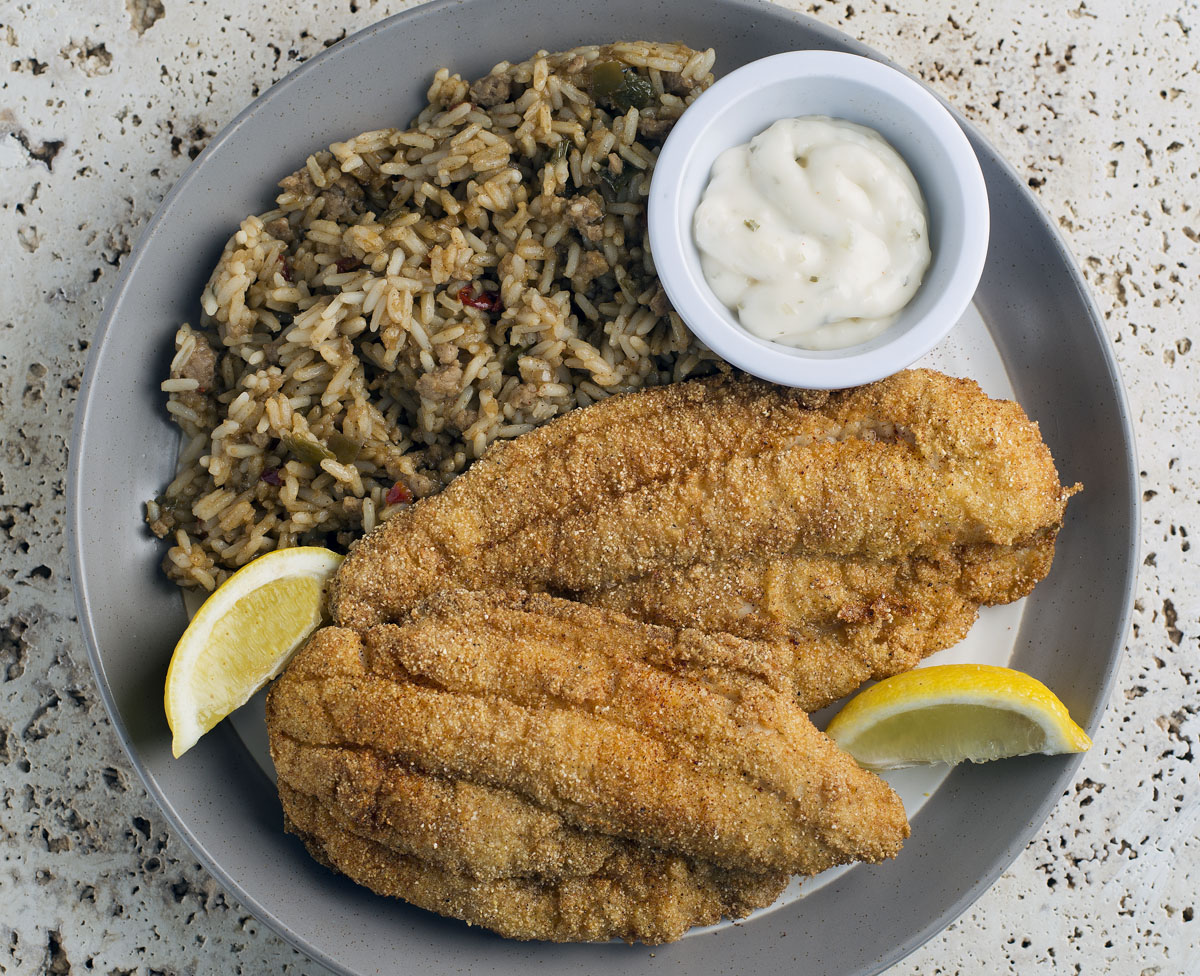 The Late Night Gourmet
Good job! Your Roux is lovely. I did cringe over the tomatoes. Your recipe is a nice fusion of Cajun and Creole Gumbo. Bravo!!
BTW - I am a Cajun Gumbo snob. High praise for The Late Night Gourmet.
caseydog - I am so glad you cooked catfish. It is much maligned and under appreciated fish.

ElizabethB said:
caseydog - I am so glad you cooked catfish. It is much maligned and under appreciated fish.
Click to expand...

I think it goes back to the pre farming days, when catfish were often caught in dubious water, like muddy (even polluted) rivers -- the old "channel cats."

Today's catfish farms in the US (a lot in Louisiana) produce a very clean fish.

Another benefit to catfish to fledgling cooks is that they are more forgiving than many other white, flaky fish. You can over cook them by a considerable amount, and still have a firm, but moist and tender fish filet, compared to other fish. They don't dry out or turn to mush as easily.

Thank you for the compliment...it means a lot coming from you!

Yes...I hesitated before including the tomatoes. I knew there's a sacrilege in certain quarters (like the French Quarter

). To be totally honest, I included them because my wife's mom came over with a massive amount of tomatoes from her brother's garden. They're excellent, and I was running out of things to put them on (sandwiches, salads).

And, really, you'd never know they were in there. I used red bell peppers, the tomatoes are seeded, and the jalapenos make this a spicy bowl. I can't see even the most diehard Cajun being able to detect them and spit them out.

Okay, I now have two fishes in my possession.

That Trout I plan to stuff with tapenade, that I mentioned earlier on, when the topic was announced . I actually HAVE to make this by tomorrow as I entered it in a FB group challenge (not a judging challenge, btw). Topped with a mushroom sauce and breaded in almond. Should be fun!

The other fish I obtained was Arctic Char, similar but not identical to salmon. I've just written up my tentative recipe plan for this one - And I want to cook it between now and Friday. The Arctic char was a complete luck-out find - normally my fish choices are limited where I now live. The topping for this one will actually be... (hold your breath...) sweet! Not normally Me. (Fig-maple vinaigrette, with a few other additions...).

I do have a third idea. Won't mention until I am ready to cook it. 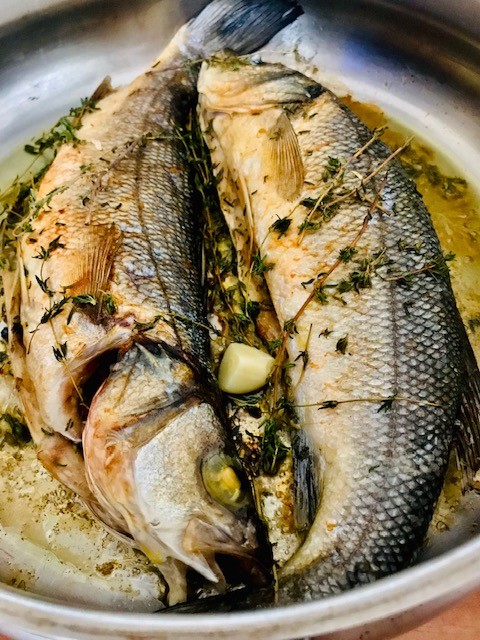 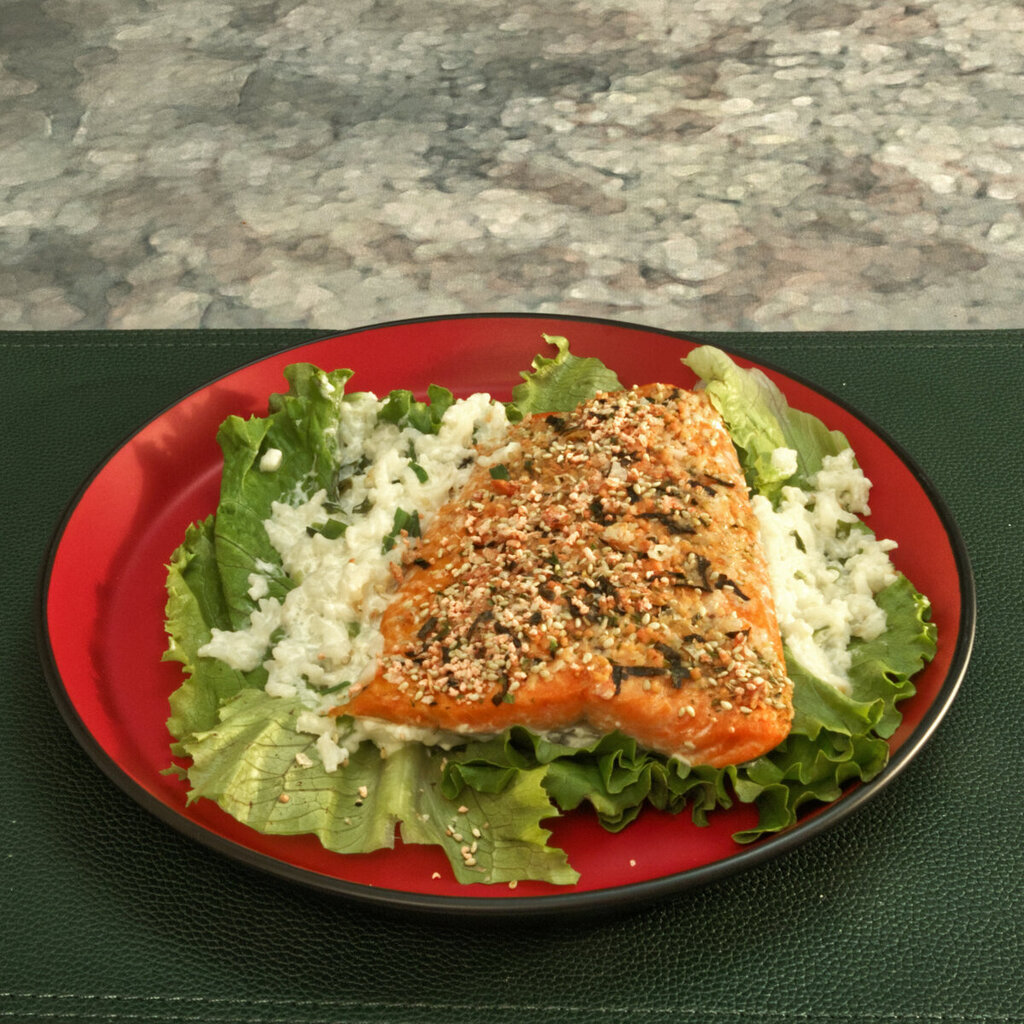 3 down and 3 to go. The remaining recipes will use salmon again, Pacific halibut and unagi.

I have already written up the recipes and have had to create a 4th recipe for a special sauce.
You must log in or register to reply here.