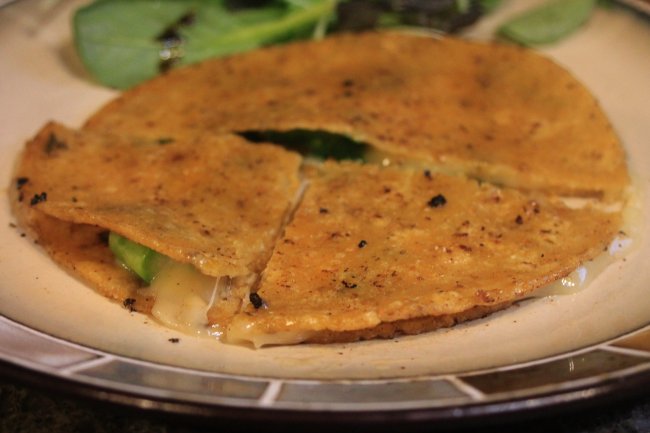 Grilled cheese corn tortilla (instead of toast), with asparagus and ramps inside. You can see them peaking out!

What are ramps? Ramps are not just a way into a venue, that you need to climb, descend, or use roller skates for. They are veggies in the allium family. Their scientific name is Allium tricoccum, and they are native to eastern Canada and the United States.
They have a small root and underground bulb, a short stalk and a broad leaf. To the unexperienced, they DO look a lot like the poisonous lily-of-the-valley, but they really prefer to grow in moist areas near stream beds or other water sources, and I think they require more sun than do the drier-weather preferring lilies-of-the-valley. There are places in Canada and the US where they are regarded as "threatened". I find that they taste somewhere between shallots and garlic. Native American tribes such as the Menominee, Cherokee, Iroquois, Ojibwa and the Potawatomi are all known to use this plant in their ancestral diets.

The ones I received from MassFoodDelivery - who obtained them from a Massachusetts farm - unfortunately had their bulbs cut off. Not sure why - much of the flavor is down there in the bulb. At any rate, I was surprised to be able to get ramps this year - and yes, these looked exceedingly fresh despite the absence of their bulbs. The bulbs themselves are elongated ovals. 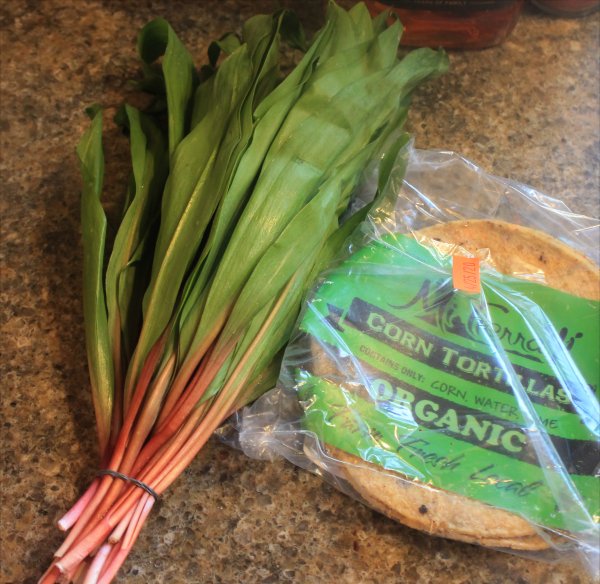 These are the ramps, with the bulbs sadly amputated. A good organic corn tortilla package to the right.

For cheese, I used Pepper Jack - which is Monterey Jack with spicy pepper inclusions. Use anything you like that melts.

Consider this a riff off of the old general Grilled Cheese Sandwich. I had this for breakfast this morning, alongside some salad mixed greens.

Grilled Cheese with Asparagus & Ramps in Soft Corn Tortillas
Heat the butter in a skillet to about medium.

Add each tortilla and allow the butter to coat each side, then remove. About a minute or two overall.

Pan fry the asparagus for a couple minutes in the butter, then remove.

Layer the cheese and the asparagus on one of the tortillas, working for a good cheese coverage. Top with the ramps. Top this with the other tortilla.

Using a spatula, transfer the tortilla cheese sandwich to the skillet. Cook for two minutes (or less) on one side, then gently flip, and cook the other side for the same time.