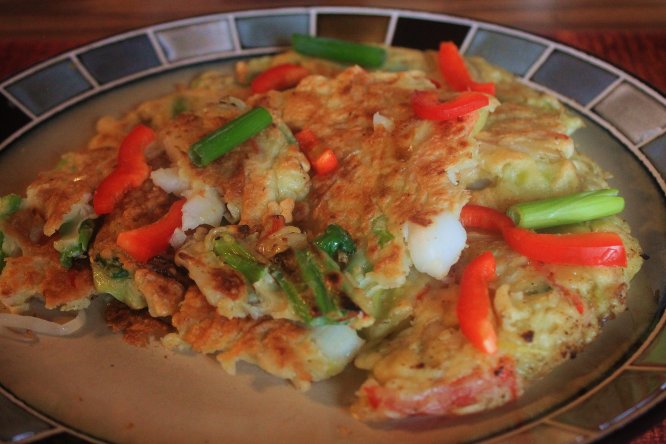 A double serving of Korean pancakes, this version with scallops, scallion (green onion), bell pepper, onion, and mung bean sprouts. (And a side-dip.) Yes, nearly half is waiting for tomorrow! 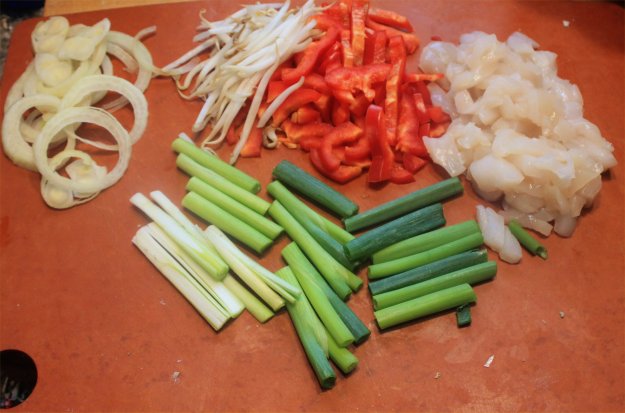 I ended up only using 1/3rd of the depicted bell pepper. The rest became garnish or snacks. Sometimes I chop with enthusiasm! 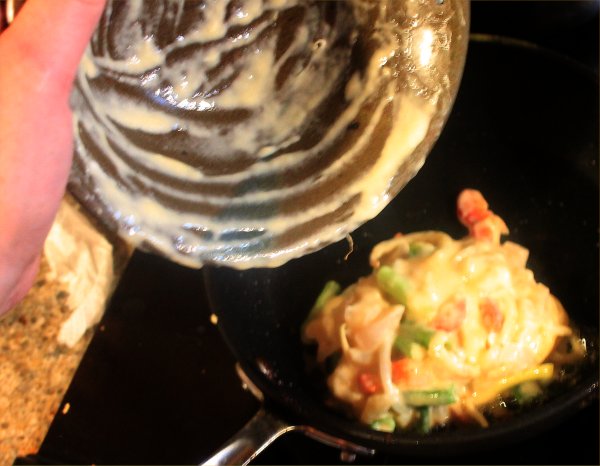 This recipe is part of Asian Cooking Month here at Goats and Greens. Where all recipes posted this month will be east Asian or southeast Asian in theme, in honor of the upcoming Lunar New Year’s on the 12th. 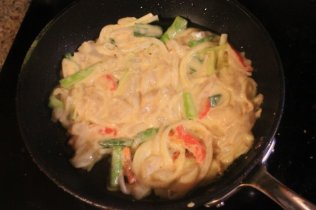 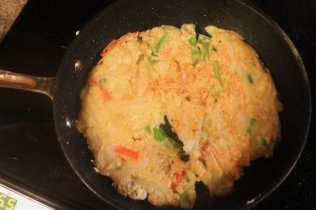 For the above: Pre- and post- flip of one of the pancakes. (You may note that I was chicken and cut the pancake in two prior to flipping this first of my pancakes…_(you can see the gap…)​

I will note these taste extremely close to the Korean pancakes I used to pick up from the Korean supermarket, H-Mart, down in White Plains, NY, Unfortunately, the store is two states away from me during an era where we are not being encouraged to cross state lines. But I am glad now to have this workable recipe!

I made a half recipe, as noted below – just double up the numbers for the full.

Cut the green onion into 2 inch (5 cm) long segments. I sliced the thicker white sections into half, longitudinally. (At the last moment, I decided to cut the above scallions into 1 inch (2.5 cm) lengths, as I felt this would mix better.

In a large bowl, add the egg, flour, salt, and water. Mix them by hand until all large flour lumps are gone.

Add the veggies and seafood.

Over medium heat, add 2 tablespoons of oil to a skillet. allow to heat, and add half of the batter, spreading it evenly, and flattening it. (If you are making a full recipe, ie double my ingredient list, add 1/3rd the batter instead – you will be making three slightly smaller pancakes instead of these two slightly larger ones.)

After about two minutes, the edge of the pancake will brown and crisp. Carefully flip with a spatula, and cook an additional 2-3 minutes.

Remove the cooked pancake to a plate.

Add a couple teaspoons more of the oil, and repeat the batter cooking steps, until you’ve finished making all the pancakes.

You can garnish with a little raw scallion, and a touch of a veggie with contrasting color, such as the red pepper. Use an Asian dipping sauce as available.

Leftovers refrigerate fine. Just re-heat, preferably in a skillet and flip. A quick visit to a toaster oven also works.

This looks really simple (which means I'll find a way to not do it right ;-). It almost reminds me of Egg Foo Yung without the gravy. Added to my list to try! Thanks for sharing.

What colourful and delicious looking pancakes. So these are quite thin pancakes? I'm not familiar with Korean pancakes, hence my asking.
I can't quite make out what I'm seeing in the 3rd photo...

Morning Glory said:
What colourful and delicious looking pancakes. So these are quite thin pancakes? I'm not familiar with Korean pancakes, hence my asking.
I can't quite make out what I'm seeing in the 3rd photo...
Click to expand...

I think that 3rd photo is showing the mixture being poured into the pan.

This looks like how I want all my breakfasts to look. It seems to have some relation to hash browns, but I'm amazed to see that what looks like shredded potato...isn't potato. I also like that the way you presented this recipe looks like how people actually cook. Things don't always go the way you plan, but if you create something tasty, it's all worth it.
N

Those look lovely. At first I thought the pancake part of the recipe was just the same as any other pancake recipe, then I realized it uses water instead of milk. I might try this recipe, but would just go for one egg as half an egg is rather difficult to measure.

When you whisk the egg it's not hard to half it.
Stay healthy