You can substitute the ground beef with whatever ground meat you like. (Or for vegetarian/vegan, switch to lentils that you’ve soaked and cooked to where they still have texture, but are soft.) Use what works for you. 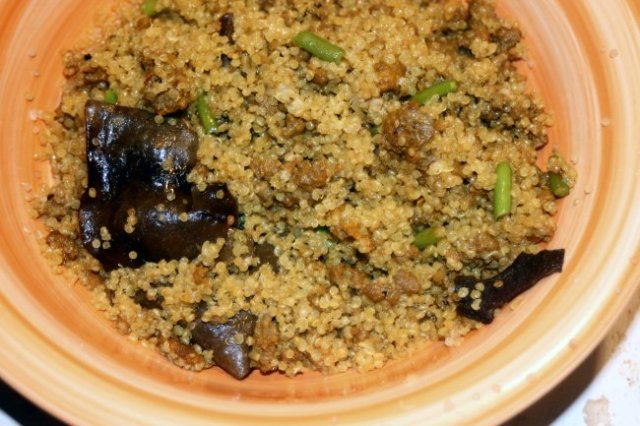 Quinoa holds onto texture well, and has a pleasantly “nutty” flavor. 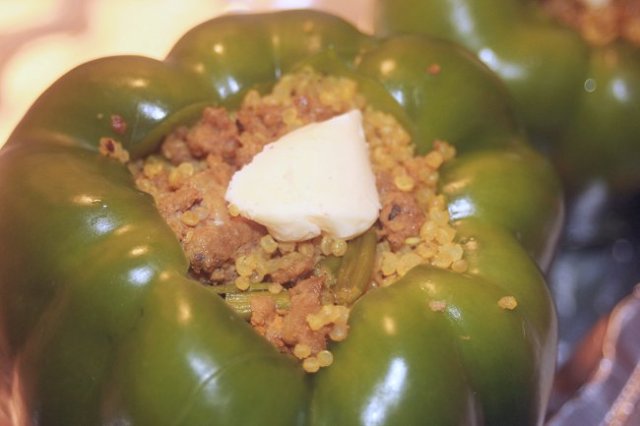 Quinoa is so versatile, and cooks up readily in a rice cooker. It has a pretty good nutritional profile, and as it turned out, worked very well in the following recipe. 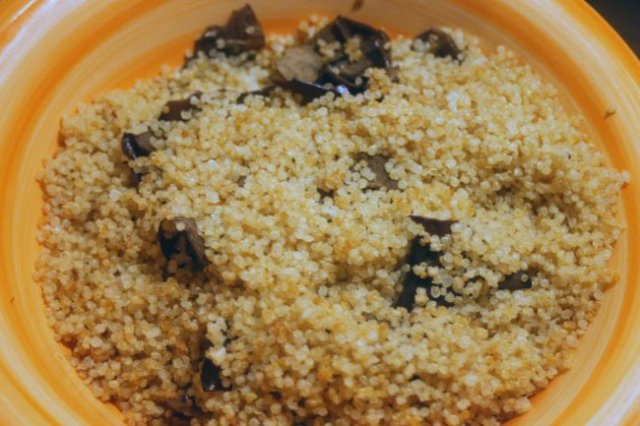 Above: The quinoa portion of the stuffing, just pulled out of the rice cooker.

Feel free to adapt any or all of the extra flavor profile I use in this recipe. 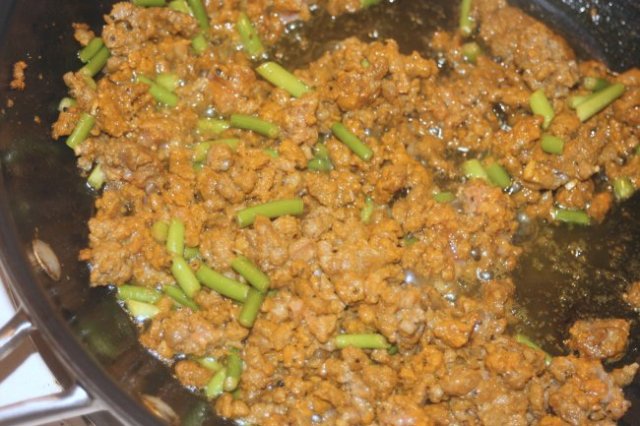 Above: Prepping up the ground beef portion. With this high quality CSA beef, there was very little excess fat to remove. Note the chopped garlic scapes. 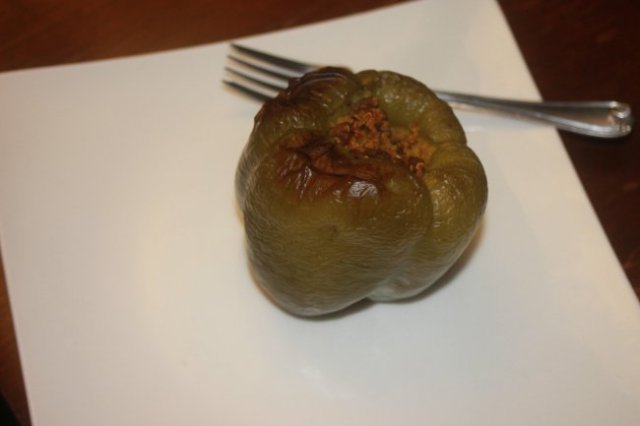 Prep time: I do this while the quinoa is cooking.
Cook Time: about 30-40 minutes for the quinoa and the skillet; plus 25-40 for the baking
Rest Time: 5 minutes
Serves: Approximately 4 stuffed bell peppers — one per person

3/4 cup quinoa
1.5 cups water, chicken broth, or veggie broth. I used broth from a boxed package of “organic chicken bone broth”, although making my own is my preferred route.
Two or three dried tree ears (tree fungi), or perhaps 5 dried porchini — broken up. Optional, but adds a nice change.

Put into rice cooker and let ‘er rip. I use the brown rice setting. I let the cooking soften the dried mushroom matter, but you can pre-soften them in warm water first.

For the ground meat:

Let cooking oil heat, and add the meat, breaking it up and browning it, cooking it through. Use a spoon to remove/discard grease, if any. Add the seasonings and continue to mix.

Approximately 4 bell peppers (this will depend on bell pepper size. Aim for peppers with flat bottoms if you plan to bake the peppers on their bottoms.
The stuffing mix, as made above.
Optional chunks of cheese, melt-able. Say, a couple ounces.
1 – 2 teaspoons of butter.

Clean, and using a paring knife, cut out the stem and leave a hole large enough to scoop out the seeds and excess ribbing.

Add the stuffing, occasionally putting in a chunk of cheese at whim. Fill in gaps with the stuffing. Fill to the top. Add a dab of butter to the top of each of these — less than half a teaspoon — to keep the exposed surface of the stuffing from drying out.

Cook for 25-40 minutes in the oven. This will depend on the size of the peppers, and on how au dente you like your peppers. I prefer mine on the crispy side, but I know in this I am a minority. However, I did get distracted, and mine began to roast up a little — they were still quite good! 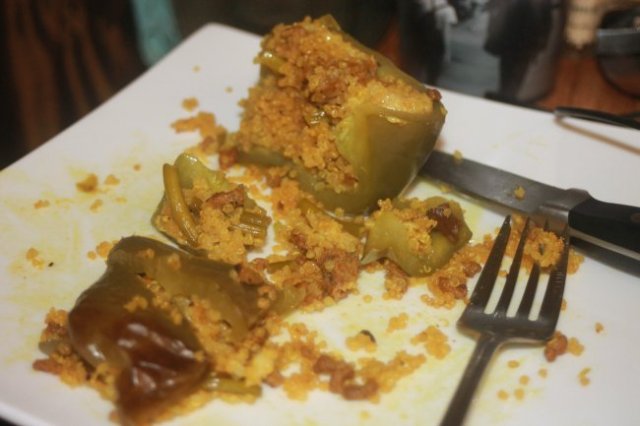 That looks easy enough. Bookmarked! Thank you for posting it.

I would gladly eat that, and I generally don't like stuffed bell peppers...but my mom used to make them with a horrid tomato and rice stuffing with hamburger. I was glad to see you did not use any tomato sauce in yours. And love the idea of the mushrooms and garlic scapes, and the turmeric, very clever. Nice job!

JAS_OH1 said:
I would gladly eat that, and I generally don't like stuffed bell peppers...but my mom used to make them with a horrid tomato and rice stuffing with hamburger. I was glad to see you did not use any tomato sauce in yours. And love the idea of the mushrooms and garlic scapes, and the turmeric, very clever. Nice job!
Click to expand...