I went looking for a recipe to try for the milk/cream CookingBites ingredient challenge. I thought to myself that someone somewhere must have a milk pudding recipe, straight and simple. And they do. The Canadians have one. So I'm going to make it dairy free (for obvious reasons) and because hubby like vanilla it's going to omit the rosewater. Otherwise I'm trying it straight as it is... That is until I look at the sugar levels and rethink that idea. 125ml of sugar in a litre of any milk sounds a lot but when soya or almond milk can already contain sugar it takes on a new concept. So I'm going to omit the sugar and replace it with a couple of dates. I'll cook the dates in the unsweetened milk (can't yet decide on which of the soya, almond or coconut milk (not the tinned variety but the dairy milk replacement variety that comes in tetra packs) though right now I'm heading down the soya milk idea just because I'm in the middle of moving house, in exhausted and soya milk has a lot more protein in it than almond, coconut, brazil, hazelnut, hemp or even rice milk has.

As usual I will upload the recipe, then make it tomorrow, and review it with photos (hopefully). Mine won't be pure white because hate white sugar (even if I was using sugar) and because I'm using dates which will get liquidised into the pudding.

Method
I'll let you know how we get on later. it's based around this Canadian Milk Pudding recipe (https://www.dairygoodness.ca/recipes/everyone-s-milk-pudding)
I'm also looking at trying a Japanese version of the same dish as well.
Last edited: 2 May 2018

I've found that Stevia works well as a sweetener when it's replacing something that provides "background" sweetness, but not so much when the point of the thing is to be SWEET. I think it would work here, depending on how sweet you like your pudding.

Coincidentally I made something similar but with vege-gel. I haven't posted it up yet. I did make a cornflour one a week or so ago but it was horrible! I think I may have used too much cornflour...

I like the idea of making a milk pudding with dates.

Kake Lover said:
I like the idea of making a milk pudding with dates.
Click to expand...

It does rather affect the colour of the pudding though.


morning glory said:
I did make a cornflour one a week or so ago but it was horrible! I think I may have used too much cornflour...
Click to expand...

I weighed out a 1/3rd of a cup of cornflour (50g) when I made up the milk pudding yesterday. It is set but not quite solid, but the pudding doesn't run to fill the gap when you remove a spoonful like custard does. You can't taste the cornflour with 50g per litre of milk.

I made it up with unsweetened soya milk (500ml), 3 dates, 1tsp vanilla extract and 25g of cornflour. I decided that it was going to make 3 servings rather than 2 so poured out into 3 Ikea children's bowls. 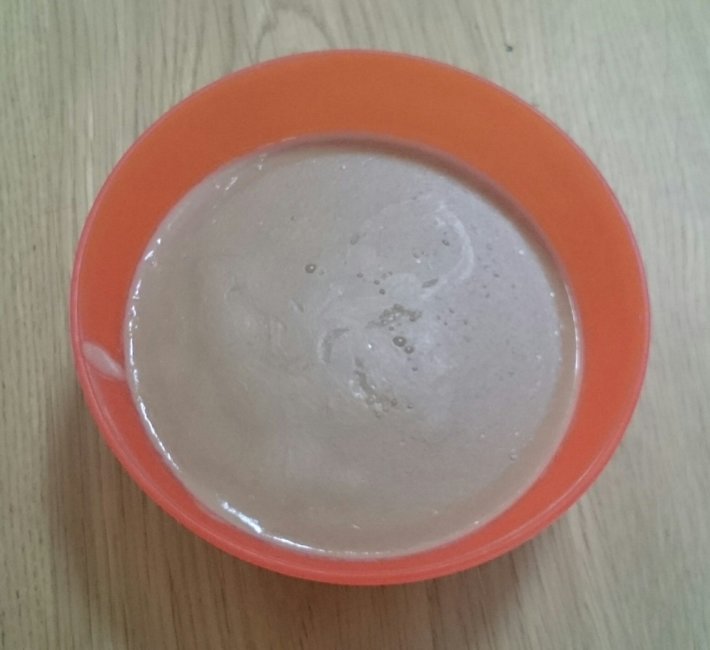 As was, so to speak. This was straight out of the blender. I actually preferred it hot. 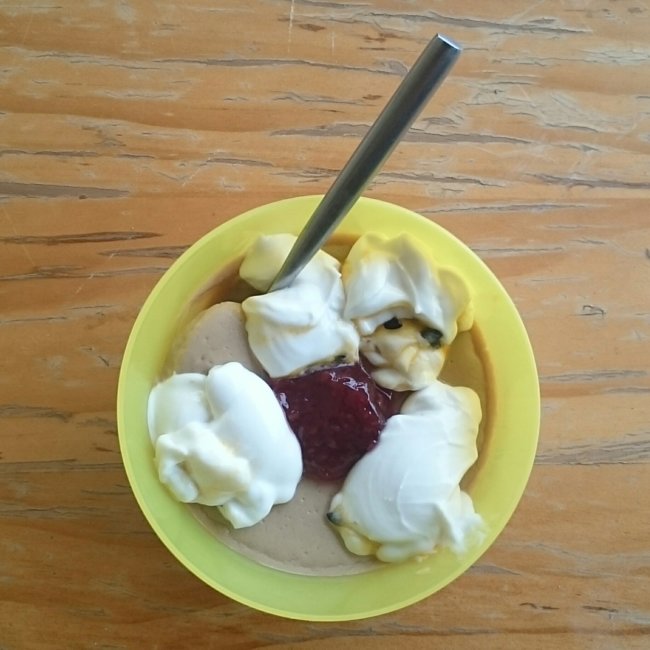 Even with jam and coconut yoghurt it still needs help, lots of help to look good in a bowl. Perhaps white is the way to go with milk pudding? But I hate white sugar...

SatNavSaysStraightOn said:
Perhaps white is the way to go with milk pudding? But I hate white sugar...
Click to expand...

You could go completely grey like my ice-cream! I would have expected dates and brown sugar (if that is what you used) to produce a caramel coloured result, though.

morning glory said:
You could go completely grey like my ice-cream! I would have expected dates and brown sugar (if that is what you used) to produce a caramel coloured result, though.
Click to expand...

I only used dates, no sugar.
It is a brownish (or rather was) colour though definitely not caramel in colour. More like the table top which is oak. I think the white balance has been thrown a touch on the tablet. It's not the best camera and the device is getting on in age now as well. Even the yellow of the child's Ikea bowl isn't as vibrant as it is in real life.
You must log in or register to reply here.
Share:
Facebook Twitter Reddit Pinterest Tumblr WhatsApp Email Share Link
Top Bottom