Shopping lists - do you use them?

Probably one of the first steps I need to take in becoming more organised in my cooking, is to write shopping lists, the reason I don't currently do this is mostly because I feel restricted by them - yessss I could write a list and buy additional foods, but in general I love to shop freely and buy whatever takes my fancy when I'm in the shop! Also, some of you may agree with me that there's also an element of not wanting to buy a full jar/ pack of whatever, when the recipe you're looking at only calls for a teaspoon of that ingredient, and then you won't have a use for it thereafter!

The obvious problem in not creating lists, is that I then don't have any specific ingredients for specific recipes.

How do you guys manage your shopping/ recipes?
Do you plan what you'll eat for the whole week and shop per what it says on your list? or do you have a shopping list for one/ two recipes that you'll cook and freestyle the rest? or do you never use shopping lists and work with what you have once you're home, maybe creating your own new inventions along the way?

What do you find to work best?

FoodEnergetics said:
Do you plan what you'll eat for the whole week and shop per what it says on your list?
Click to expand...

I used to plan more when I was cooking for a family - but no longer. Now I 'play' with ingredients so I'll order whatever is in season or looks interesting (I mainly shop at on-line supermarkets which do next day delivery). I have a few recipes in development most of the time (for example for the current CookingBites Recipe Challenge: Coffee) for which I order specific things. For example, I ordered some pigeon breasts which I'm thinking of cooking with some sort of coffee sauce or nut/coffee sprinkled. If I don't get round to it they go in the freezer.

I'm extravagant - because cooking is my main interest and I don't spend money on much else. I ordered some gorgeous pink radicchio yesterday which I know tastes lovely and will look great in a food photo. I just have to work out what to do with it.

So for me, food shopping is a creative process. Its providing the raw materials for projects.

I dislike shopping (unless it's for specific items, in, buy and out) but I write lists for my wife.

I always use a shopping list, and not just for groceries....for everything! I use an app called OurGroceries and have about 10 different shopping and to-do lists (groceries, DIY, holiday, Christmas) which I update as and when something occurs to me.

For food, each weekend we try to sit down and plan our meals for the coming week (I hate finishing work and then having to start thinking about what we can have for dinner) so if we need something specific then it goes on the list to make sure we remember to buy it. But when we actually go shopping (or shop online) I almost always browse for inspiration too and the meal plan isn't set in stone so if something else appeals then that's fine.


FoodEnergetics said:
there's also an element of not wanting to buy a full jar/ pack of whatever, when the recipe you're looking at only calls for a teaspoon of that ingredient, and then you won't have a use for it thereafter!
Click to expand...

If its something that doesn't go off then I have no problem putting it in the store cupboard to use later. I don't even really mind it when its something fresh.....finding new dishes to use up unusual ingredients can be fun

Mostly, I do my food shopping online, and have my groceries delivered. I add items to my online shopping cart until I'm ready to "check out." I can pull up past history /orders for the staples I usually order, and compare prices as well. Works better than jotting down items on the back of envelopes

We use them almost religiously.
I have a blackboard complete with chalk that during the week we write up what had been used up or emptied and needs replacing. if one of us wants a specific food item on the menu for the next week ,then it will get written up on there, or a reminder like we've forgotten is pancake day (don't worry is in March this year! ). Also written up is the menu for the current week. We don't specify what day a certain meal is happening unless it's using a vegetable that perishes very quickly , like spinach for example, or something needs to be eaten before it goes off...

Then on a Saturday morning over breakfast we chose the meals for the next week. We each pick a cookbook and select a meal. Usually each meal will cover 2 nights minimum. If we've both chosen something that only does 2 nights each we'll choose a brand new recipe from a new cookbook. the store cupboard is checked and the shopping list gets created.

Mostly my husband does the shopping alone for any number of reasons but tbh, dragging me around the supermarket in my wheelchair slows life down considerably and if he needs to get to another shop as well, well he's only going to get home in time for lunch if I don't go.

But I try to go at least once a month if only to look at new products in the store which he just ignores or never notices (I've not worked out which yet ). Several such new products quite recently have become regular new items in this household and the latest is that Woolies now stock 4 new varieties of vegan ice cream (one by Ben's and. Jerry's (which had been available in the US for the last 4 years!) another by is a Cornetto and finally 2 new flavours of vegan ice cream by Magnum). I guess we can try one a week for the next few weeks...

but if I hadn't told him I knew about them (from an email by the company ) he'd never have noticed/if he had , never have bought them.

So why the religious shopping list sticking to ?
So shopping list. He can't claim (though he had tried ) that I didn't tell him it was needed!

Unlike many parts of Europe, we don't have open air markets where daily meal shopping occurs. So, we generally shop one day a week based upon a list from planned meals.

We plan our meals for the week and make a shopping list, this way we don't forget anything nor do we waste anything because we only buy what we need. If we cannot get a main ingredient then we will go 'off list' but this is rare.

This week's shopping list along with recipes for the week and their location . 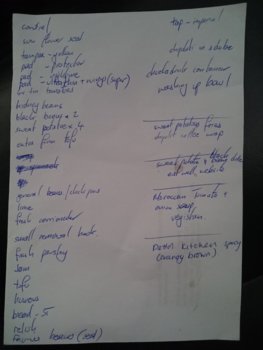 I'm gonna have to go shopping to get some meats, we had a fire in the building last week & the power was turned off in several apts since the fire (mine incl.), which means that all of the meat that was in the freezers since the fire, had probably spoiled!!

The mgt. co has to reimburse us for that, since it's not our fault that we lost power!!

I write ours in a specific way. Certain things on the left, some in the middle and others on the right, if my husband adds something and puts it in the wrong column then it throws me completely

Lullabelle said:
I write ours in a specific way. Certain things on the left, some in the middle and others on the right, if my husband adds something and puts it in the wrong column then it throws me completely

We divide it up by shops ,so left handside is food usually in isle order but not always . Right hand side will be another shop (hardware store in the case above ) followed by what we're eating for the week and divulge cookery book it can be found in on what page.

Right hand side is non-food stuff, the middle is packet/tin stuff, the left top is fruit, salad, veg, below that is meat and fish.

Lullabelle said:
Right hand side is non-food stuff, the middle is packet/tin stuff, the left top is fruit, salad, veg, below that is meat and fish.
Click to expand...

Ours constitutes a list of everything we need to get when we do our shopping trip into town. It always takes a minimum of half a day. If more than 2 or 3 closely distanced stores need visiting, then it's a lunch or job . One disadvantage of living rurally , but it was the same when we lived in the Lake District, UK, not to mention Scotland, but it wasn't as bad when we lived rurally in Surrey. That was only a half hour drive to the shops so we'd easily get home for lunch on a Saturday or we'd eat out on a Friday at the local pizza express and do the shopping on a Friday night . That got moved to a Thursday night because the supermarket was a lot less busy . It did mean that hubby had to pick me up from work with the bike rack on car or drop me into work the following morning though!
You must log in or register to reply here.
Share:
Facebook Twitter Reddit Pinterest Tumblr WhatsApp Email Link
Top Bottom