Directions
Preheat the oven to 350F. Lightly oil a 9 X 13-inch glass baking dish. In a large bowl, toss the bread with the olive oil and spread on a large rimmed baking sheet. Bake for about 20 minutes, tossing once or twice, until the bread is golden and lightly crisp.

Meanwhile, in a large skillet, cook the bacon over medium-high heat until crisp, about 8 minutes. Transfer the bacon to paper towels to drain; reserve 2 TB of the fat in the skillet.

Add the onion to the skillet and cook over medium heat, stirring occasionally, until softened, about 5 minutes. Add the tomatoes and crushed red pepper and cook until any liquid has evaporated, about 3 minutes.

Return the toasted bread cubes to the bowl. Add the contents of the skillet along with the bacon, shredded cheeses, chives, and broth. Stir until the bread is evenly moistened. Season with salt. Spread the mixture in the prepared baking dish and cover with lightly oiled foil.

Bake the bread mixture in the center of the oven for 30 minutes. Remove the foil and bake until the top is crispy, about 15 minutes longer. Carefully remove the baking dish from the oven and, using a ladle or spoon, make 8 wells in the bread mixture. Crack an egg into each well. Return the dish to the oven and bake for about 15 minutes, until the egg whites are set but the yolks are still runny. Serve the breakfast bake right away, with hot sauce.

NOTE: if you're not using low-sodium chicken broth, you may wish to omit the added salt in the recipe. 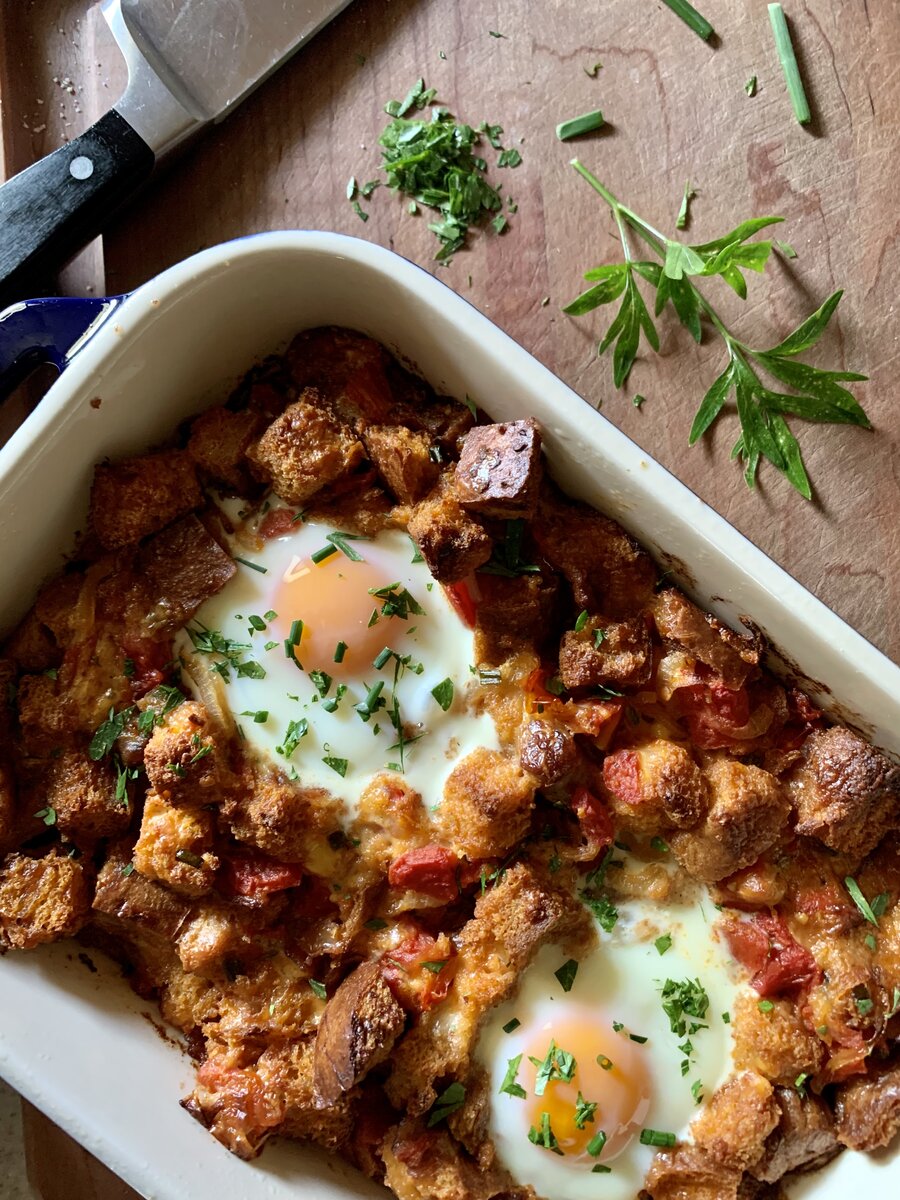 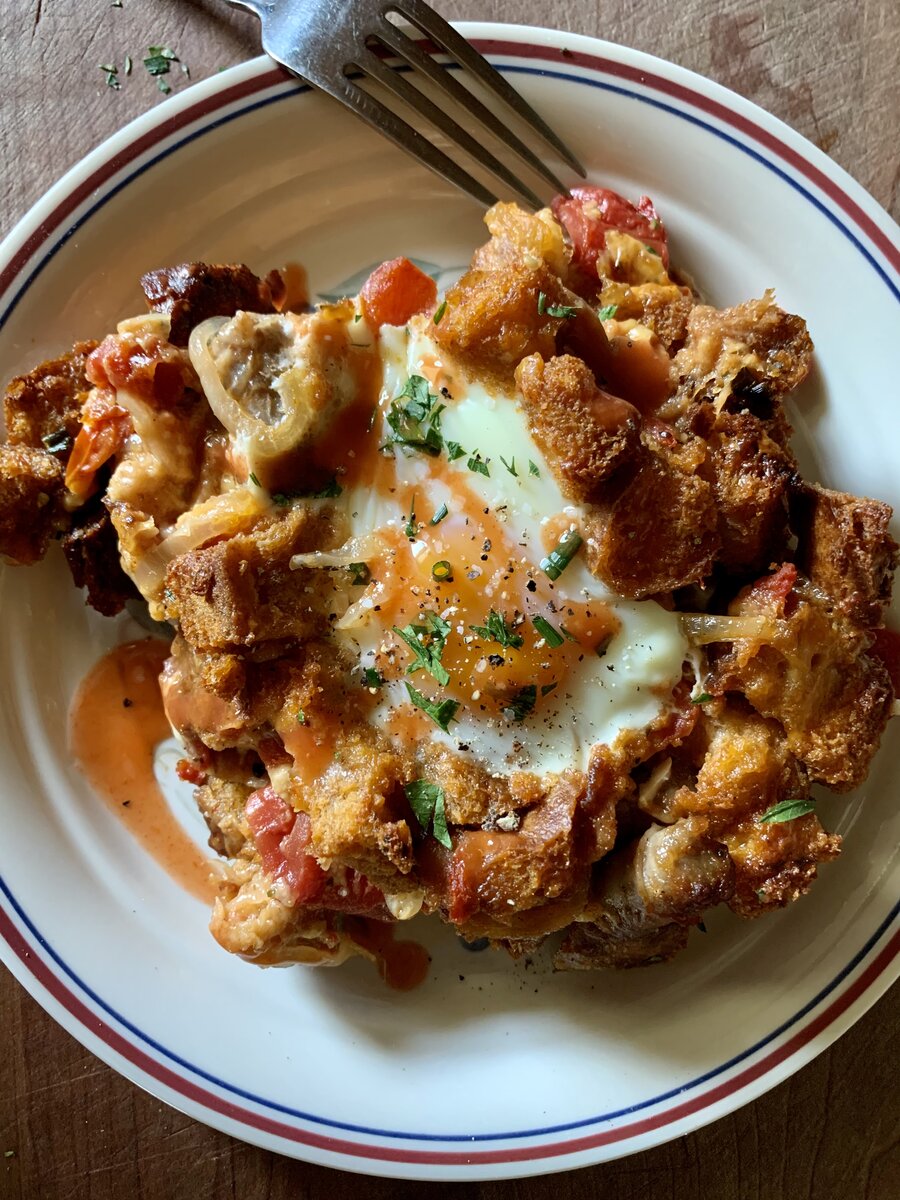 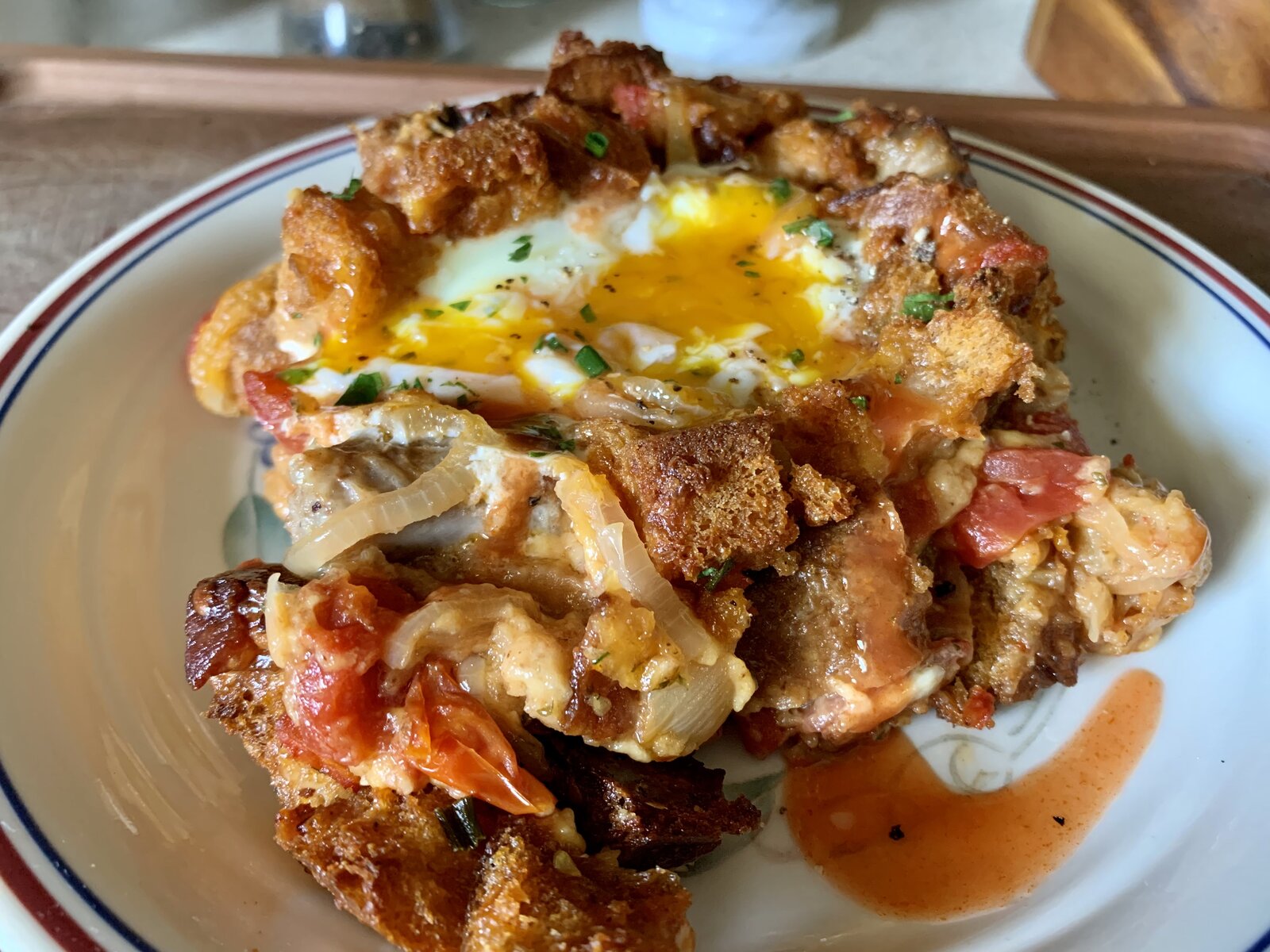 Well, wow. I can see having this for breakfast, lunch, and dinner. And a late night snack.

That recipe and those photos make me hungry!

Wonder if you could put it together night before to the baking point, refrigerate, then start with the baking the next morning.

medtran49 said:
Wonder if you could put it together night before to the baking point, refrigerate, then start with the baking the next morning.
Click to expand...

The side notes in the cookbook says that yes, you can.

TastyReuben said:
The side notes in the cookbook says that yes, you can.

I figured you probably could. Recipe is similar to 1 that I make with hatch chiles.

Looks awesome. Did I miss my invite?