This is a favorite appetizer recipe of mine (and my husband and kids), and something I have made many, many times. The combination of delicious fresh shrimp surrounded by a creamy mixture of cheese and spices stuffed into a spicy jalapeño and then wrapped in bacon? What's not to love? When I take this dish to parties, it's usually the first thing that disappears from the appetizer table! It's relatively simple to make and very customizable. This version is my personal concoction, but I have seen other recipes online that use cheddar cheese, montery jack, or goat cheese in the cheese filling, and some people use herbs or different spices. If someone doesn't like seafood, a substition of chorizo or other ground meat could be used, and if someone doesn't like spicy food, a sweet mini pepper could be used instead.

Notes: For the ingredients, you want to have your shrimp a little smaller than your jalapeños, but not much. You can make more or less of these poppers, but just figure that you will need the same amount of shrimp as you have jalapeños, and about 1 ounce of cream cheese for each popper (plus adjustments to other ingredients). I like to use food prep gloves when coring the jalapeños to avoid having my sensitive skin on my hands stinging. I also par cook my bacon to the point where it's still pliable but a lot of the fat has rendered off so as to not create a greasy pool of liquidy fat in the bottom of the baking dish. Also, make a few extra pieces of bacon just in case some of them don't work out. Keep in mind that thick cut bacon will likely not work for this recipe. Parchment paper works like a charm to keep cleanup fairly simple. I served my poppers on a small bed of greens with tomatoes fresh from the garden, along with a sprinkle of feta cheese and cilantro, plus a drizzle of balsamic vinegar to cut the heat, which turned out great! 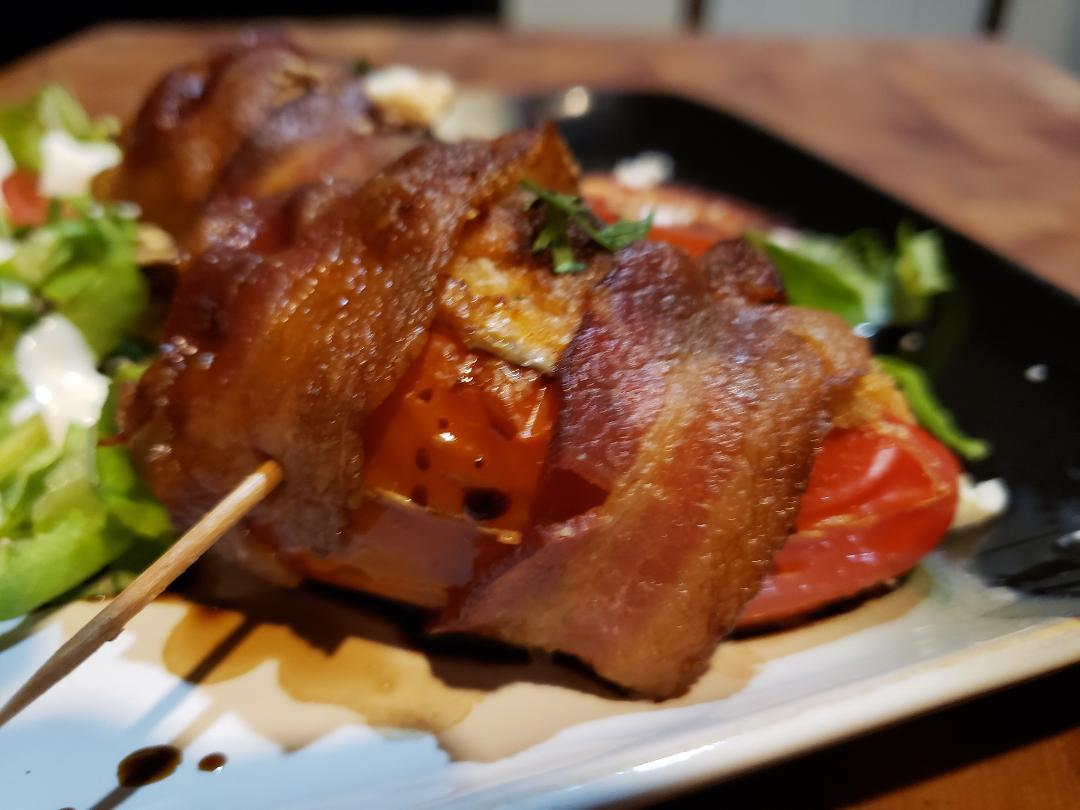 
Preparation method:
Core the jalapeños, slicing around the top stem closely, and make 1 long vertical cut down the length of the pepper, then pull out the pith and seeds. If you like a little more heat you can leave some of it in. 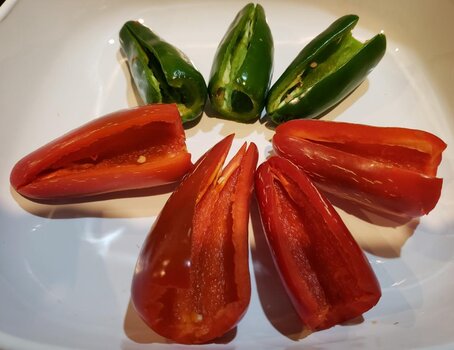 Place bacon on a parchment lined baking sheet and bake at 325F for approximately 15-20 minutes to allow some of the fat to render down, but not cooked so much as the bacon is no longer pliable for wrapping the jalapeños. While the bacon is cooking, place the cheeses, spices, onion, and 1 TBSP of bread crumbs in a small mixing bowl and blend. Spread a small amount of the cheese mixture inside of each jalapeño, then stuff each with a piece of shrimp (tail at the smaller end of the jalapeño). Coat each popper with the remaining cheese mixture. 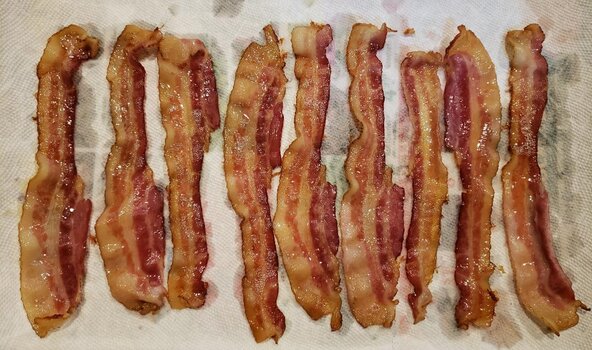 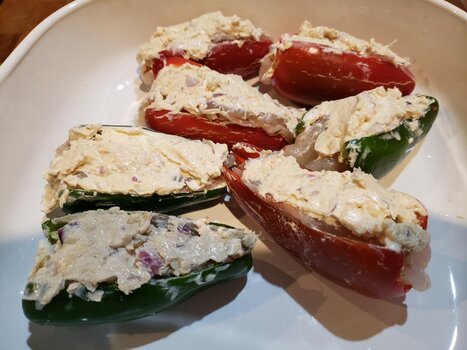 Sprinkle additional breadcrumbs over the top of each popper, then wrap each one with bacon and secure with a toothpick on each side. I start on the side of the popper and go over the top, then underneath until completely wrapped. Bake in an appropriately sized baking dish lined with parchment paper in the oven on the middle rack at 375F for approximately 45 minutes. Garnish with fresh herbs as desired. Eat and enjoy! 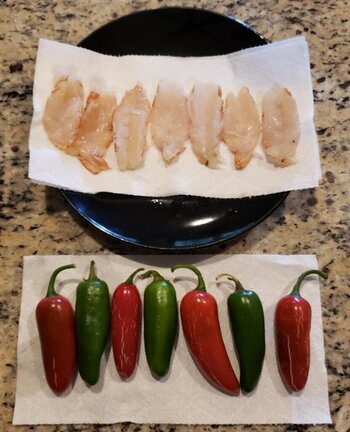 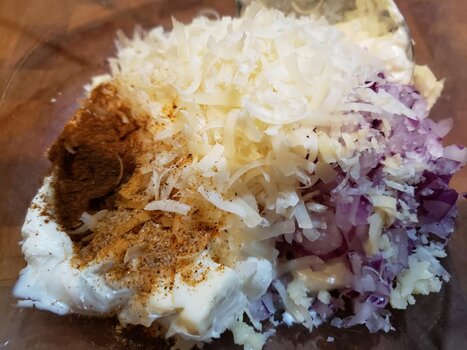 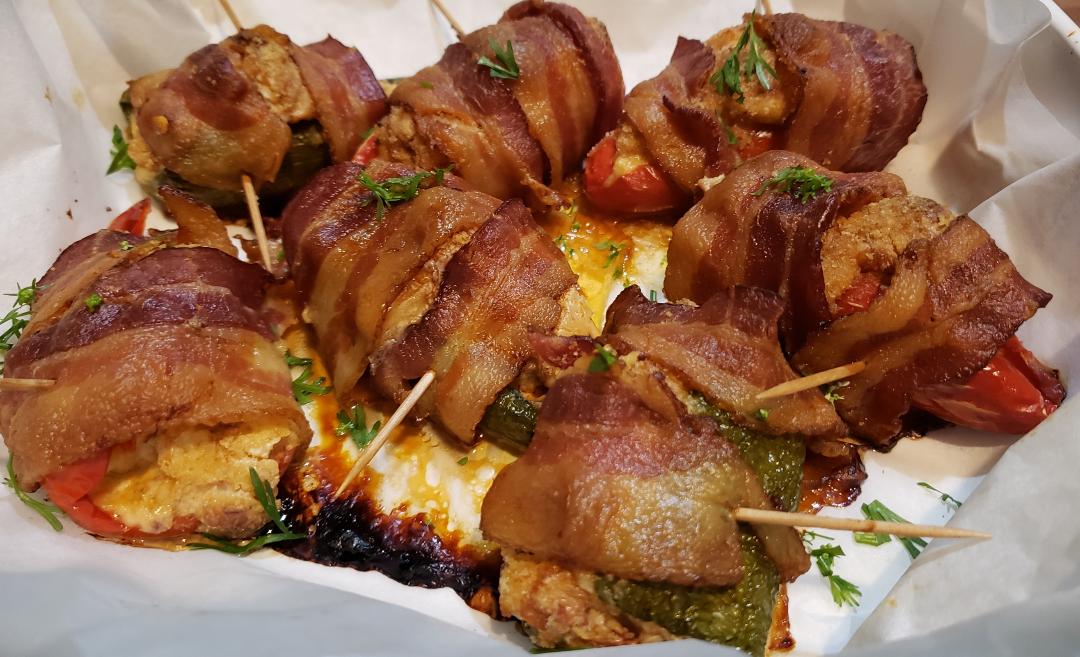 Morning Glory said:
Looks delicious. Do you eat them hot as well as room temperature? I was assuming if you took to a party they would be room temperature.
Click to expand...

Yes, they're quite yummy at room temperature! I eat rather slowly when I eat spicy foods so the red ones end up lukewarm before I'm finished eating.